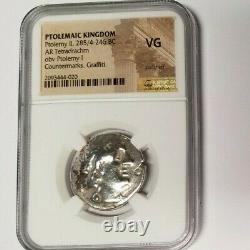 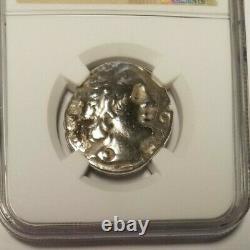 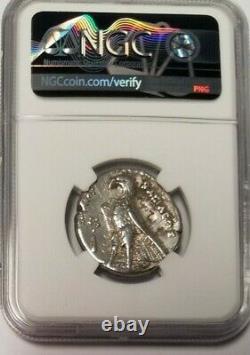 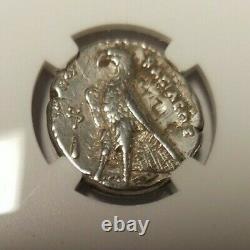 This is a Ptolemaic Kingdom Tetradrachm (AR=Silver) of Ptolemy II (285/4-246 BC); minted in Tyre, Lebanon. It is Certified by NGC and graded as VG, but polished. There are COUNTERMARKS and Ancient GRAFFITI. The obverse has the portrait of Ptolemy I, and the reverse is of an Eagle with the mint-mark and emperor's name. PTOLEMY II, Philadelphus (Lover of his brother) Took over when his father abdicated.

The Pharos Lighthouse (Ancient Wonder) was built in the Alexandrine harbor and expanded library. Cleverest merchant to ever control Alexandria Caravan Cities, p. Instigated the translation of the Hebrew Bible into Greek - The Septuagint (means 70). First Syrian War against Antiochus I.

Lost Cyrene and Libya to his half-brother Magas, thus making him King of Cyrene. Second Syrian War against Antiochus II - Captured Cyprus, Tyre and Sidon from the Seleucids. The Zenon Archive contains letters of his year spent in Palestine and Jordan. Zenon was the agent of Apponius, the Finance Minister. He settled his Greek war veterans in Faiyum and transformed its prosperity.

Built a great gate at the. Leading to the Sanctuary of Mut.

Built numerous sanctuaries, including the Temple of Isis, and repaired many others. Extended a previous canal, from the.

Established on the Red Sea the port of Berenike, named for his daughter. Peace was made with the Seleucids, and he gave his daughter, Berenice, to Antiochus II. Daniel 11:6 They will form an alliance and the daughter of the king of the south. The item "Ptolemaic Kingdom AR Tetradrachm Ptolemy II 285-246 BC NGC VG Tyre" is in sale since Wednesday, September 15, 2021. This item is in the category "Coins & Paper Money\Coins\ Ancient\Greek (450 BC-100 AD)".