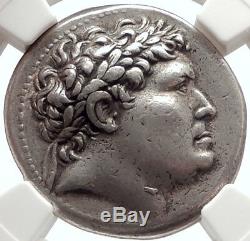 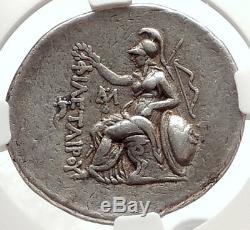 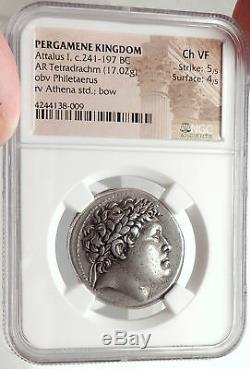 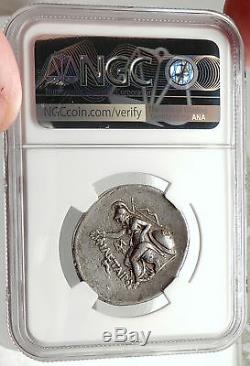 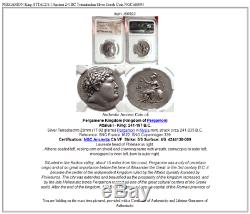 SNG Copenhagen 339 Certification: NGC Ancients. Ch VF Strike: 5/5 Surface: 4/5 4244138-009 Laureate head of Philetaerus right. Athena seated left, resting arm on shield and crowning name with wreath; cornucopia to outer left, monogram to inner left, bow to outer right. Situated in the Kaikos valley, about 15 miles from the coast, Pergamon was a city of uncertain origin and of no great importance before the time of Alexander the Great.

In the 3rd century B. It became the center of the independent kingdom ruled by the Attalid dynasty founded by Philetairos. The city was extended and beautified as the prosperity of the kingdom increased, and by the late Hellenistic times Pergamon ranked as one of the great cultural centers of the Greek world.

He was the first cousin once removed and the adoptive son of Eumenes I, whom he succeeded, and was the first of the Attalid dynasty to assume the title of king in 238 BC. He was the son of Attalus and his wife Antiochis. Attalus won an important victory over the Galatians, newly arrived Celtic tribes from Thrace, who had been, for more than a generation, plundering and exacting tribute throughout most of Asia Minor without any serious check.

This victory, celebrated by the triumphal monument at Pergamon (famous for its Dying Gaul) and the liberation from the Gallic "terror" which it represented, earned for Attalus the name of "Soter", and the title of "king". A courageous and capable general and loyal ally of Rome, he played a significant role in the first and second Macedonian Wars, waged against Philip V of Macedon. He conducted numerous naval operations, harassing Macedonian interests throughout the Aegean, winning honors, collecting spoils, and gaining for Pergamon possession of the Greek islands of Aegina during the first war, and Andros during the second, twice narrowly escaping capture at the hands of Philip. Attalus was a protector of the Greek cities of Anatolia and viewed himself as the champion of Greeks against barbarians.

During his reign he established Pergamon as a considerable power in the Greek East. He died in 197 BC, shortly before the end of the second war, at the age of 72, having suffered an apparent stroke while addressing a Boeotian war council some months before. He and his wife were admired for their rearing of their four sons. He was succeeded as king by his son Eumenes II.

Athena or Athene (Latin: Minerva), also referred to as Pallas Athena , is the goddess of war, civilization, wisdom, strength, strategy, crafts, justice and skill in Greek mythology. Minerva, Athena's Roman incarnation, embodies similar attributes. Athena is also a shrewd companion of heroes and the goddess of heroic endeavour. She is the virgin patron of Athens. The Athenians built the Parthenon on the Acropolis of her namesake city, Athens, in her honour (Athena Parthenos).

Athena's cult as the patron of Athens seems to have existed from the earliest times and was so persistent that archaic myths about her were recast to adapt to cultural changes. In her role as a protector of the city (polis), many people throughout the Greek world worshiped Athena as Athena Polias ("Athena of the city").

It is located 26 kilometres (16 mi) from the modern coastline of the Aegean Sea on a promontory on the north side of the river Caicus (modern-day Bakrçay) and northwest of the modern city of Bergama. Many remains of its impressive monuments can still be seen and especially the outstanding masterpiece of the Pergamon Altar. It became the capital of the Kingdom of Pergamon during the Hellenistic period under the Attalid dynasty in 281-133 BC. Pergamon is cited in the Book of Revelation as one of the seven churches of Asia.

Xenophon provides the earliest surviving documentary mention of Pergamon. Captured by Xenophon in 399 BC and immediately recaptured by the Persians, it was severely punished in 362 BC after a revolt. It did not become important until Lysimachus, King of Thrace, took possession in 301 BC, but soon after his lieutenant Philetaerus enlarged the town, the kingdom of Thrace collapsed and it became the capital of the new kingdom of Pergamon which Philetaerus founded in 281 BC, beginning the Attalid dynasty. In 261 BC he bequeathed his possessions to his nephew Eumenes I (263-241 BC), who increased them greatly, leaving as heir his cousin Attalus I (241-197 BC). The Attalids became some of the most loyal supporters of Rome in the Hellenistic world.

Under Attalus I (241-197 BC), they allied with Rome against Philip V of Macedon, during the first and second Macedonian Wars, and again under Eumenes II (197-158 BC), against Perseus of Macedon, during the Third Macedonian War. For their support against the Seleucids, the Attalids were rewarded with all the former Seleucid domains in Asia Minor. As a consequence of its rise to power, the city expanded greatly.

They sent gifts to Greek cultural sites like Delphi, Delos, and Athens. They defeated the invading Celts. They remodeled the Acropolis of Pergamon after the Acropolis in Athens.

However, his revolt was put down in 129 BC by the consul M. Perperna, and Aristonicus was executed in Rome. After this, Pergamon was divided by Perperna's successor, M'. Aquillius, among Rome, Pontus, and Cappadocia.

Pergamon was briefly the capital of the Roman province of Asia, before the capital was transferred to Ephesus. After a slow decline, the city was favored by several imperial initiatives under Hadrian (117 - 138).

This sanctuary grew in fame and was considered one of the most famous therapeutic and healing centers of the Roman world. Galen, after Hippocrates the most famous physician of antiquity, was born at Pergamon and received his early training at the Asclepeion.

Pergamon reached the height of its greatness under Roman Imperial rule and was home to about 200,000 inhabitants. The city was an early seat of Christianity and was granted a bishopric by the 2nd century.

The city suffered badly during the third century and was badly damaged by an earthquake in 262 and was sacked by the Goths shortly after. The Library of Pergamon was renowned, and second only to the Library of Alexandria, although not approaching Alexandria in scholarship. World-renowned expert numismatist, enthusiast, author and dealer in authentic ancient Greek, ancient Roman, ancient Byzantine, world coins & more. Ilya Zlobin is an independent individual who has a passion for coin collecting, research and understanding the importance of the historical context and significance all coins and objects represent.

Send me a message about this and I can update your invoice should you want this method. Getting your order to you, quickly and securely is a top priority and is taken seriously here. Great care is taken in packaging and mailing every item securely and quickly. What is a certificate of authenticity and what guarantees do you give that the item is authentic? You will be very happy with what you get with the COA; a professional presentation of the coin, with all of the relevant information and a picture of the coin you saw in the listing. Additionally, the coin is inside it's own protective coin flip (holder), with a 2x2 inch description of the coin matching the individual number on the COA. Whether your goal is to collect or give the item as a gift, coins presented like this could be more prized and valued higher than items that were not given such care and attention to. When should I leave feedback?

Visit the "Guide on How to Use My Store". For on an overview about using my store, with additional information and links to all other parts of my store which may include educational information on topics you are looking for. The item "PERGAMON King ATTALUS I Ancient 241BC Tetradrachm Silver Greek Coin NGC i66893" is in sale since Friday, January 26, 2018.