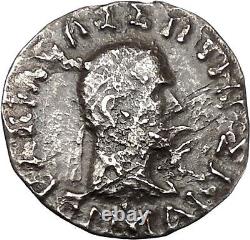 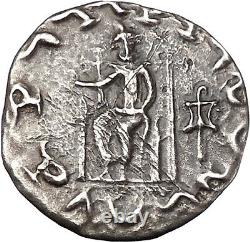 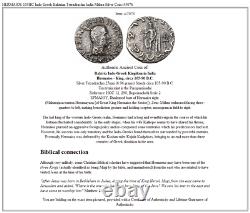 Silver Tetradrachm 25mm (6.96 grams) Struck circa 105-90 B. Uncertain mint in the Paropamisadai Reference: HGC 12, 290; Bopearachchi Serie 2 EPMAIOY, Diademed bust of Hermaios right. (Maharajasa tratasa Heramayasa [of Great King Hermaios the Savior]), Zeus-Mithra enthroned facing three-quarters to left, making benediction gesture and holding scepter; monogram in field to right. The last king of the western Indo-Greek realm, Hermaios had a long and eventful reign in the course of which his fortunes fluctuated considerably. In the early stages, when his wife Kalliope seems to have shared his throne, Hermaios pursued an aggressive foreign policy and re-conquered some territories which his predecessors had lost.

However, his success was only transitory and the Indo-Greeks found themselves surrounded by powerful enemies. Eventually Hermaios was defeated by the Kushan ruler Kujula Kadphises, bringing to an end more than three centuries of Greek dominion in the area.

Although very unlikely, some Christian Biblical scholars have suggested that Hermaeus may have been one of the three Kings (actually identified as being Magi by the bible, and unnumbered) from the east who are related to have visited Jesus at the time of his birth. After Jesus was born in Bethlehem in Judea, during the time of King Herod, Magi from the east came to Jerusalem and asked,'Where is the one who has been born king of the Jews? We saw his star in the east and have come to worship him Matthew 2:18. The Baktrian and Indo-Greek Kingdoms.

The ancient authors have furnished us with very little information concerning this easternmost of all the Greek realms. Accordingly, the numismatic evidence is of more than usual importance in the attempt to piece together the history of the kings who ruled in Baktria and, later, in the area south of the Hindu Kush.

The kingdom was created from the Seleucid province of Baktro-Sogdiana when the satrap Diodotos declared himself independent of Antiochus II about 256 B. Antiochus III, at the end of the century, tried unsuccessfully to reimpose Seleucid authority in the area, and early in the 2nd century B. King Demetrios of Baktria extended his rule southwards to include former provinces of the Mauryan Empire. The first bilingual coins, with inscriptions in Greek and Karosthi and struck on new'Indo-Greek' weight standard, date from this time of Greek expansion. Much of Baktria was lost to Scythian invaders about 130 B.

And before the end of the century what was left of the Indo-Greek kingdom split into eastern and western divisions. By the end of the 1st century B. The last traces of Greek rule had disappeared, submerged beneath the tide of Kushan conquest. Hermaeus Soter "the Saviour" was a Western Indo-Greek king of the Eucratid Dynasty, who ruled the territory of Paropamisade in the Hindu-Kush region, with his capital in Alexandria of the Caucasus (near today's Kabul , Afghanistan). Bopearachchi dates Hermaeus to circa 9070 BCE and R.

Senior to circa 9580 BCE but concedes that Bopearachchi's later date could be correct. Hermaeus seems to have been successor of Philoxenus or Diomedes , and his wife Kalliope may have been a daughter of Philoxenus according to Senior. Judging from his coins, Hermaeus' rule was long and prosperous, but came to an end when the Yuezhi , coming from neighbouring Bactria overtook most of his Greek kingdom in the Paropamisade around 70 BCE. According to Bopearachchi, these nomads were the Yuezhi , the ancestors of the Kushans, whereas Senior considers them Sakas.

Following his reign, it is generally considered that Greek communities remained under the rule of these Hellenized nomads, continuing rich cultural interraction (See Greco-Buddhism). Some parts of his kingdom may have been taken over by later kings, such as Amyntas Nikator. The coinage of Hermaeus was copied widely (posthumous issues), in increasingly barbarized form by the new nomad rulers down to around 40 CE (see Yuezhi article). At that time, Kushan ruler Kujula Kadphises emphatically associated himself to Hermaeus on his coins, suggesting he was either a descendant by alliance of the Greek king, or that at least he wanted to claim his legacy. In any case, the Yuezhi-Kushan preserved a close cultural interaction with the Greeks as late as the 3rd century CE.

Given the importance of Hermaeus to the nomad rulers, it is possible that Hermaeus himself was partially of nomad origin. Hermaeus issued Indian silver coins of three types. The first type has diademed or sometimes helmeted portrait, with reverse of sitting Zeus making benediction gesture. Hermaeus also issued a rare series of Attic silver tetradrachms of this type, which were issued for export to Bactria. The second type was a joint series of Hermaeus with his queen Kalliope.

The reverse departs from the traditional Hermaeus format, in that it shows the king on a prancing horse. The "king on a pracing horse" is characteristic of the contemporary Greek kings in the eastern Punjab such as Hippostratos , and it has been suggested that the coin represented a marital alliance between the two dynastic lines. The horseman on Hermaeus' version is however portrayed somewhat different, being equipped with a typic Scythian longbow.

The third series combined the reverses of the first series, without portrait. Hermaeus also issued bronze coins with head of Zeus - Mithras and a prancing horse on the reverse.

A Chinese historical record from the Hanshu Chap. 96A could possible be related to Hermaeus, even though this is very speculative and the record more likely refers to later Saka kings. The chronicle tells how a king who may possibly be identified as Hermaeus received the support of the Chinese against Indo-Scythian occupants, and may explain why his kingdom was suddenly so prosperous despite the general decline of the Indo-Greeks during the period. The Chinese records would put Hermaeus's dates later, with his reign ending around 40 BCE.

According to the Hanshu , Chap. , king of Jibin (Kophen, upper Kabul Valley), killed some Chinese envoys. After the death of the king, his son (Spaladagames) sent an envoy to China with gifts. The Chinese general Wen Zhong, commander of the border area in western Gansu , accompanied the escort back. Wutoulao's son plotted to kill Wen Zhong.

When Wen Zhong discovered the plot, he allied himself with Yinmofu Hermaeus? , "son of the king of Rongqu" (Yonaka , the Greeks). They attacked Jibin (possibly with the support of the Yuezhi , themselves allies of the Chinese since around 100 BCE according to the Hanshu) and killed Wutoulao's son. Was then installed as king of Jibin, as a vassal of the Chinese Empire, and receiving the Chinese seal and ribbon of investiture. Himself is recorded to have killed Chinese envoys in the reign of Emperor Yuandi (4833 BCE), then sent envoys to apologize to the Chinese court, but he was disregarded.

During the reign of Emperor Chengdi (517 BCE) other envoys were sent, but they were rejected as simple traders. These events may have initiated an alliance between the Greeks and the Yuezhi (even possibly a dynastic alliance), explaining why the Yuezhi gained pre-eminence after the reign of Hermaeus, why their rulers such as Heraios then minted coins in a way very faithful to the Greek type, and why the first Kushan emperor Kujula Kadphises associated himself with Hermaeus on his coins, in a way characteristic of a ruler asserting his pedigree. What is a certificate of authenticity and what guarantees do you give that the item is authentic? You will be quite happy with what you get with the COA; a professional presentation of the coin, with all of the relevant information and a picture of the coin you saw in the listing. Is there a number I can call you with questions about my order?

The item "HERMAIOS 105BC Indo Greek Baktrian Tetradrachm India Mithra Silver Coin i45076" is in sale since Friday, February 6, 2015. This item is in the category "Coins & Paper Money\Coins\ Ancient\Greek (450 BC-100 AD)". The seller is "highrating_lowprice" and is located in Rego Park, New York. This item can be shipped worldwide.