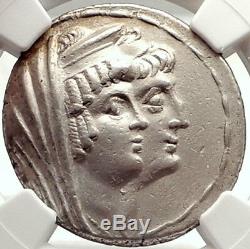 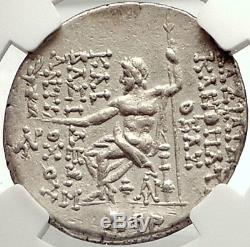 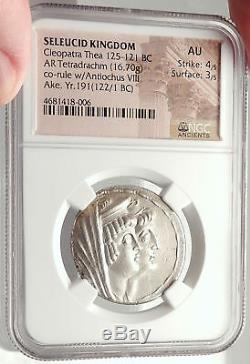 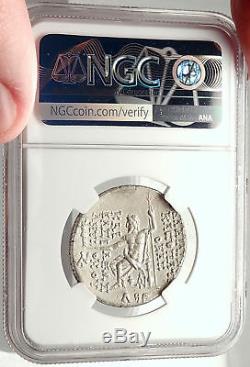 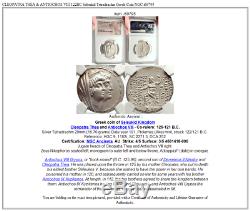 Reference: HGC 9, 1182i; SC 2271.3; DCA 252 Certification: NGC Ancients. AU Strike: 4/5 Surface: 3/5 4681418-006 Jugate heads of Cleopatra Thea and Antiochos VIII right. Zeus Nikephoros seated left; monogram to outer left and below throne, A(koppa)P (date) in exergue. 125-96, second son of Demetrios II Nikator. He was placed upon the throne in 125 by his mother Cleopatra, who put to death his eldest brother Seleukos V, because she wished to have the power in her own hands. He poisoned his mother in 120, and subsequently carried on war for some years with his brother Antiochos IX Kyzikenos. At length, in 112, the two brothers agreed to share the kingdom between them, Antiochos IX Kyzikenos having Coele and Phoenicia, and Antiochos VIII Grypos the remainder of the provinces. Grypos was assassinated in 96. Cleopatra Thea (Greek: , which means "Cleopatra the Goddess") c. 164 - 121 BC surnamed Eueteria i.

"Good-harvest/fruitful season" was the ruler of the Hellenistic Seleucid Empire. She ruled the Seleukid Kingdom from 125 BC after the death of Demetrius II Nicator. She eventually ruled in co-regency with her son Antiochus VIII Grypus, who poisoned her in 121 or 120 BC.

Cleopatra Thea grew up in Egypt as the daughter of Ptolemy VI and Cleopatra II. She was probably born ca. She may have been engaged to her uncle Ptolemy VIII king of Cyrene in 154, but he eventually married her sister Cleopatra III. In 150 BC she married Alexander Balas in a sumptuous ceremony at Ptolemais Akko. The marriage produced a son named Antiochus VI Dionysus. In 145 BC her father invaded the Seleukid Kingdom, defeated Alexander Balas in battle and remarried her to Demetrius II, only to die a few days later. Demetrius set himself up as co-ruler with the young boy Antiochus VI, but may have killed him in 142 BC. In 139 BC Demetrius II was captured fighting against the Parthians and was held prisoner by them until 129 BC. After Demetrius was captured, his younger brother, Antiochus VII Sidetes, who was raised in the city of Side in Pamphylia, came to the Seleukid Kingdom and took the throne, marrying Cleopatra Thea in 138 BC. Cleopatra Thea bore him at least one son, Antiochus IX Cyzicenus. The names of any other children are uncertain.

In 129 BC, the Parthians released Demetrius II, as a political manoeuvre against Sidetes, to claim his throne and his wife. That same year Sidetes was killed fighting the Parthians. Cleopatra had taken the precaution of sending Antiochus IX (her son by Antiochus VII) to Cyzicus in Asia Minor (hence his surname). In 132/131 BC Cleopatra Thea's mother, Cleopatra II of Egypt rebelled against her brother Ptolemy VIII Euergetes II Tryphon. In 127 BC Cleopatra II fled to her son-in-law Demetrius' court in the Seleukid Kingdom.

Demetrius' elder son, Seleucus, became king with the name Seleucus V in 125 BC; however, his mother, Cleopatra Thea, had him murdered soon after. From 125 BC to 121 BC, Cleopatra ruled the Seleukid Kingdom and to legitimize her reign, she shared the throne with her son, Antiochus VIII Grypus.

Antiochus VIII was married to Tryphaena, the daughter of Ptolemy VIII and Cleopatra III. Grypus became less controllable as he grew up and in 121 BC Cleopatra Thea decided to eliminate him. Since this was not common behavior for her, Grypus was suspicious and forced her to drink the wine, which killed her.

Grypus re-organised the state and for the next eight years he provided stability and financial recovery. This period would end ca. Cleopatra Thea was a daughter of Ptolemy VI of Egypt and Cleopatra II. She had two brothers named Ptolemy Eupator and Ptolemy respectively.

Alexander Balas was neither popular, nor an efficient ruler. The marriage was dissolved by her father. Alexander Balas died in battle against Demetrius II of the Seleukid Kingdom in 145 BC. Cleopatra Thea married Demetrius II Nicator, (Greek:) in 145 BC. Cleopatra bore him two sons, who later grew up to be kings: Seleucus V Philometor, Antiochus VIII Grypus, and possibly a daughter Laodice.

Demetrius became a captive of the Parthians from 139-129 BC. He was assassinated in Tyre in 125 BC at the orders of his wife Cleopatra Thea. Cleopatra Thea married Demetrius' younger brother, Antiochus VII Sidetes in 137 BC after Demetrius was captured by the Parthians. Cleopatra and Antiochus VII had several children: Antiochus IX Cyzicenus and likely Antiochus, Seleucus and one or two daughters named Laodice. Antiochus VIII Epiphanes/Callinicus/Philometor , nicknamed Grypus (hook-nose), was crowned as ruler of the Greek Seleucid kingdom in 125 BC.

He was the son of Demetrius II Nicator and Cleopatra Thea. Antiochus Grypus was crowned as a teenager in 125 BC after his mother Cleopatra Thea had killed his elder brother Seleucus V Philometor, ruling jointly with her. After Antiochus defeated usurper Alexander II Zabinas in 123 BC his mother tried to poison him with wine, but the suspicious king forced her to drink the cup herself. (The story may have been inspired by the fact that Grypus was interested in toxicology; some poems about poisonous herbs believed to have been written by him are quoted by the famous physician Galen). The child Antiochus Epiphanes, who is known from coins, was deposed-but not killed-when Demetrius II was restored in 129 BC.

Despite political shortcomings, Grypus was a popular king. His ugly, lazy appearance on coins (common among the last Seleucids), together with stories of his lavish banquets, made posterity believe his dynasty was degenerated and decadent. This was however a conscious image, an invocation of the Hellenistic idea Tryphe - meaning good life, which the last Seleucids strove to be associated with, as opposed to the exhausting civil wars and feuds which troubled their reigns in reality. A story of his luxurious parties claims he sent food home with guests who attended banquets, complete with a camel as beast of burden, as well as a with attendant to carry the guest himself.

This should certainly have caused some strain on the already depleted treasury. Cyzicenus' wife, also named Cleopatra, was a sister of Tryphaena and was eventually killed in a dramatic fashion in the temple of Daphne outside Antioch, on the order of Tryphaena. Cyzicenus eventually killed Tryphaena as revenge. The two brothers then divided the Seleukid Kingdom between them until Grypus was killed by his minister Heracleon in 96 BC.

Five of Grypus' sons later rose to kingship. This contributed to the confusion of civil war amid which the Seleucid empire ended. He also had at least one daughter. Laodice VII Thea, married to king Mithridates I Callinicus of Commagene as part of a settlement by Mithridates' father Sames II Theosebes Dikaios to ensure peace between the Kingdom of Commagene and the Seleucid Empire. Laodice and Mithridates' son was king Antiochus I Theos of Commagene. This was a grandson to Grypus. The Seleucid Empire was a Hellenistic state ruled by the Seleucid dynasty founded by Seleucus I Nicator following the division of the empire created by Alexander the Great. Seleucus received Babylonia and, from there, expanded his dominions to include much of Alexander's near eastern territories. The Greek population of the cities who formed the dominant elite were reinforced by emigration from Greece. Seleucid expansion into Anatolia and Greece was abruptly halted after decisive defeats at the hands of the Roman army. Their attempts to defeat their old enemy Ptolemaic Egypt were frustrated by Roman demands. Much of the eastern part of the empire was conquered by the Parthians under Mithridates I of Parthia in the mid-2nd century BC, yet the Seleucid kings continued to rule a rump state from the Seleukid Kingdom until the invasion by Armenian king Tigranes the Great and their ultimate overthrow by the Roman general Pompey. World-renowned expert numismatist, enthusiast, author and dealer in authentic ancient Greek, ancient Roman, ancient Byzantine, world coins & more. Ilya Zlobin is an independent individual who has a passion for coin collecting, research and understanding the importance of the historical context and significance all coins and objects represent. Send me a message about this and I can update your invoice should you want this method. Getting your order to you, quickly and securely is a top priority and is taken seriously here. Great care is taken in packaging and mailing every item securely and quickly. What is a certificate of authenticity and what guarantees do you give that the item is authentic?

You will be very happy with what you get with the COA; a professional presentation of the coin, with all of the relevant information and a picture of the coin you saw in the listing. Additionally, the coin is inside it's own protective coin flip (holder), with a 2x2 inch description of the coin matching the individual number on the COA. Whether your goal is to collect or give the item as a gift, coins presented like this could be more prized and valued higher than items that were not given such care and attention to.

When should I leave feedback? Please don't leave any negative feedbacks, as it happens sometimes that people rush to leave feedback before letting sufficient time for their order to arrive. The matter of fact is that any issues can be resolved, as reputation is most important to me. My goal is to provide superior products and quality of service. How and where do I learn more about collecting ancient coins? Visit the "Guide on How to Use My Store".

For on an overview about using my store, with additional information and links to all other parts of my store which may include educational information on topics you are looking for. The item "CLEOPATRA THEA & ANTIOCHOS VIII 122BC Seleukid Tetradrachm Greek Coin NGC i69795" is in sale since Wednesday, May 16, 2018.