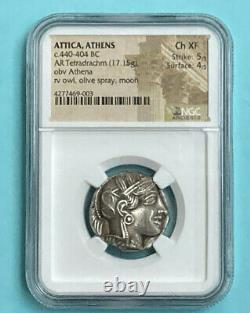 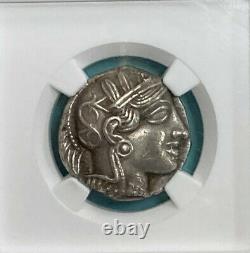 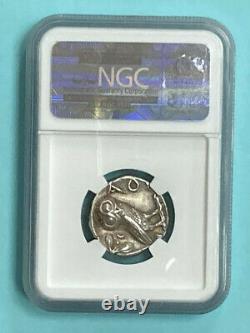 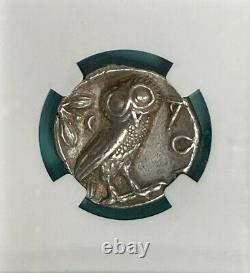 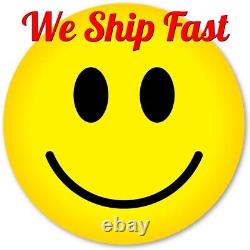 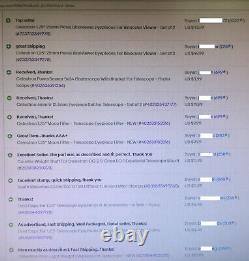 Struck sometime between 440 and 404 B. This Greek Silver Tetradrachm was minted in Athens, the capital city of Attica, a region of the Greek empire. It features perhaps the most iconic and instantly recognizable designs found on ancient coinage: the Athenian Owl, flanked by the crescent moon, olive branch, and monogram of its city of origin. The obverse features the goddess Athena herself, protected by her beautifully designed helmet. Part of what makes these coins so iconic is that they are the first mass-circulated coin ever produced! In fact, many of the skilled laborers and soldiers who were paid with these coins simply had no idea what a coin was, resulting in many coins being marked with knives or other instruments used to cut into their surface and confirm their contents.

This coin was graded by the Numismatic Guaranty Corporation (NGC) as being in choice extra fine condition. ANCIENT HISTORY YOU CAN HOLD IN YOUR HANDS - Each coin is approximately 2,400 years old from a time when Athens was a cultural center of the world and the heart of ancient Greece.

Athens was a key city-state that laid the foundations for Western civilization. When one thinks of ancient Athens, images of the Acropolis, the Parthenon and the Temple of Zeus come to mind. Now you can hold an actual piece of that history in your hands!

This Athenian Owl Silver Tetradrachm was carefully struck by ancient artisans more than two millennia ago. Coin comes sonically sealed in an acrylic coin holder and encapsulated with NGC's label. A parliament refers to a gathering of owls and a fitting label for a coin from this important coin discovery. Athena was the goddess of wisdom and warfare and the patron goddess of Athens.