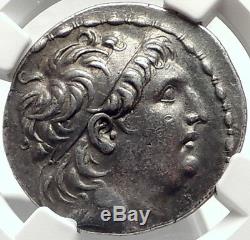 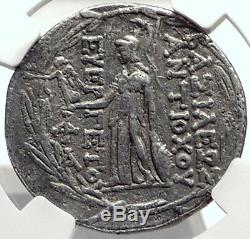 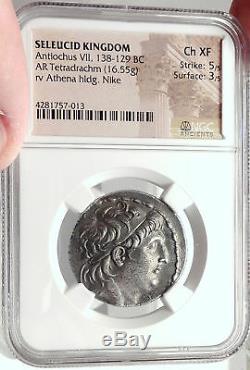 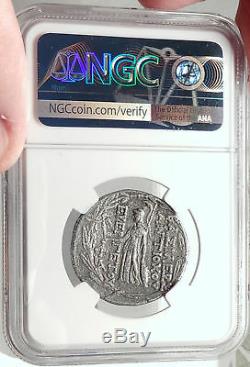 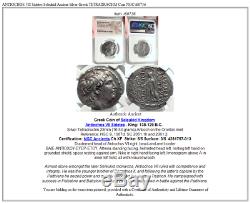 Almost alone amongst the later Seleukid monarchs, Antiochos VII ruled with competence and integrity. He was the younger brother of Demetrios II, and following the latter's capture by the Parthians he seized power and quickly disposed the usurper Tryphon. He campaigned with success in Palestine and Babylonia, but in 129 B. He was killed in battle against the Parthians. Ashkelon also Ashqelon and Ascalon ; (Hebrew: ; Arabic: Asqaln ; Latin: Ascalonia ; Akkadian: Isqalluna ; Ancient Greek: , Askalon) is a coastal city in the Southern District of Israel on the Mediterranean coast, 50 kilometres (31 mi) south of Tel Aviv, and 13 kilometres (8.1 mi) north of the border with the Gaza Strip. The ancient seaport of Ashkelon dates back to the Neolithic Age. In the course of its history, it has been ruled by the Ancient Egyptians, the Philistines, the Israelites, the Assyrians, the Babylonians, the Greeks, the Phoenicians, the Hasmoneans, the Romans, the Persians, the Arabs and the Crusaders, until it was destroyed by the Mamluks in 1270. The Arab village of al-Majdal or al-Majdal Asqalan (Arabic: ; Hebrew: -',), was established a few kilometres inland from the ancient site in the 16th century, under Ottoman rule. In 1918, it became part of the British Occupied Enemy Territory Administration and in 1920 became part of Mandatory Palestine.

In the 1948 Arab-Israeli War, al-Majdal was the forward position of the Egyptian Expeditionary Force based in Gaza. The village was occupied by Israeli forces on 5 November 1948, by which time most of the Arab population of 11,000 had fled. Jews moved into the area later that year. The Israeli town was initially called Migdal Gaza, Migdal Gad and Migdal Ashkelon. In 1953, the nearby neighborhood of Afridar was incorporated and the name "Ashkelon" was readopted to the town.

By 1961, Ashkelon was ranked 18th among Israeli urban centers with a population of 24,000. In 2014 the population of Ashkelon was 126,819. The apluster is used on ancient coins to symbolize maritime power. Antiochus VII Euergetes , nicknamed Sidetes (from Side), ruler of the Hellenistic Seleucid Empire, reigned from 138 to 129 BC.

He was the last Seleucid king of any stature. He was one of the sons of Demetrius I Soter, the brother of Demetrius II Nicator and his mother may have been Laodice V. Antiochus was elevated after Demetrius' capture by the Parthians. He married Cleopatra Thea, who had been the wife of Demetrius. Their offspring was Antiochus IX, who thus became both half-brother and cousin to Seleucus V and Antiochus VIII.

Sidetes defeated the usurper Tryphon at Dora and laid siege to Jerusalem in 132. During the siege he allowed a seven day truce for the Jews to celebrate a religious festival, impressing the Jewish leadership. According to Josephus the Hasmonean leader John Hyrcanus opened King David's sepulchre and removed three thousand talents, which he then paid Antiochus to spare the city. Nevertheless, King Antiochus' respectful treatment of the Jews, and respect for their religion, earned him their gratitude and added name, Euergetes ("the Benefactor"). With no Jewish sources of that time (the Book of Maccabees ends few years before his time) it is unclear if the siege on Jerusalem ended with a decisive Seleucid victory or simply a peace treaty. Furthermore, the fact is that Jewish forces later assisted Sidetes in his wars, and that for nearly 20 years after his death, John Hyrcanus refrained of attacking areas under Seleucid control. All in all it indicates a renewal of the friendly relations from the time of Demetrius II.

Antiochus spent the final years of his life attempting to reclaim the lost eastern territories, overrun by the Parthians under their "Great King", Mithridates I. Marching east, with what would prove to be the last great Seleucid royal army (including a unit of Judean troops under John Hyrcanus), he defeated Mithridates in two battles, killing the aged Parthian king in the last of these. He restored Mesopotamia, Babylonia and Media to the Seleucid empire, before dispersing his army into winter quarters. The Seleucid king and army spent the winter feasting, hunting, and drinking (the Seleucids maintained the Macedonian tradition of heavy drinking).

As with any time an army is quartered upon a population, tensions soon grew between the locals and the Seleukian troops. The new Parthian ruler, Phraates II, had not been idle; raising a new army while stirring up rebellion in the Seleucid occupied towns of Media.

Hoping to further sew dissension amongst his foe, Phraates also released his long-held prisoner, Demetrius II, Antiochus' older brother, to return to Seleukia and reclaim the throne. That winter (130-129 BCE), several Median towns rose in rebellion and attacked their Seleucid garrisons. Antiochus marched to support one such isolated garrison with only a small force (likely only his Royal Guards). In a barren valley, he was ambushed and killed by Phraates II and a large force of Parthians, which had entered the country without being detected. The last great Seleucid king died in battle, a fitting end for the heir of Seleucus I Nicator (the Victor).

One disputed account has Antiochus take his own life, after the battle is lost, to avoid capture by the Parthians. After Antiochus VII Sidetes, the Parthians regained the territory briefly lost, and the Seleucid realm was now restricted to Seleukia. World-renowned expert numismatist, enthusiast, author and dealer in authentic ancient Greek, ancient Roman, ancient Byzantine, world coins & more.

How and where do I learn more about collecting ancient coins? Visit the "Guide on How to Use My Store". For on an overview about using my store, with additional information and links to all other parts of my store which may include educational information on topics you are looking for.

You may also want to do a YouTube search for the term "ancient coin collecting" for educational videos on this topic. The item "ANTIOCHOS VII Sidetes Seleukid Ancient Silver Greek TETRADRACHM Coin NGC i68736" is in sale since Wednesday, April 11, 2018. This item is in the category "Coins & Paper Money\Coins\ Ancient\Greek (450 BC-100 AD)". The seller is "highrating_lowprice" and is located in Rego Park, New York. This item can be shipped worldwide.