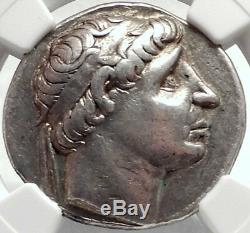 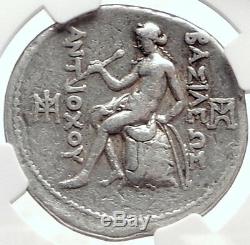 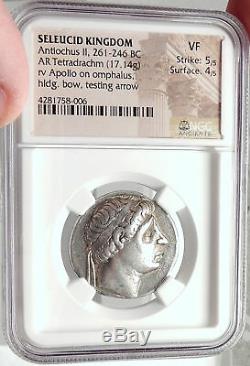 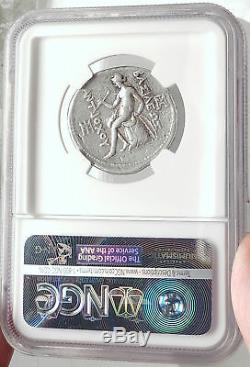 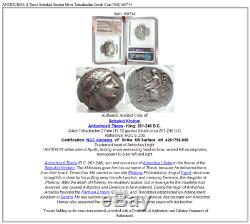 VF Strike: 5/5 Surface: 4/5 4281758-006 Diademed head of Antiochos I right. / ANTIOXOY either side of Apollo, testing arrow and resting hand on bow, seated left on omphalos; monograms to outer left and right. 261-246, son and successor of Antiochos I Soter.

To the throne of the Seleukid Kindom. The Milesians gave him his surname of Theos, because he delivered them from their tyrant, Timarchus. He carried on war with Ptolemy. Which was brought to a close by his putting away his wife Laodice, and marrying Berenice, the daughter of Ptolemy.

After the death of Ptolemy, he recalled Laodice, but in revenge for the insultshe had received, she caused Antiochos and Berenice to be murdered. During the reign of Antiochos, Arsaces founded the Parthian Empire.

, and Theodotus established an independent kingdom in Baktria. He was succeeded by his son Seleukos Callinicus.

His younger son Antiochos Hierax also assumed the crown, and carried on war some years with his brother. In Greek and Roman mythology, Apollo , is one of the most important and diverse of the Olympian deities. The ideal of the kouros (a beardless youth), Apollo has been variously recognized as a god of light and the sun; truth and prophecy; archery; medicine and healing; music, poetry, and the arts; and more. Apollo is the son of Zeus and Leto, and has a twin sister, the chaste huntress Artemis. Apollo is known in Greek-influenced Etruscan mythology as Apulu.

Apollo was worshiped in both ancient Greek and Roman religion, as well as in the modern Greco-Roman Neopaganism. As the patron of Delphi (Pythian Apollo), Apollo was an oracular god - the prophetic deity of the Delphic Oracle. Medicine and healing were associated with Apollo, whether through the god himself or mediated through his son Asclepius, yet Apollo was also seen as a god who could bring ill-health and deadly plague as well as one who had the ability to cure. Amongst the god's custodial charges, Apollo became associated with dominion over colonists, and as the patron defender of herds and flocks.

As the leader of the Muses (Apollon Musagetes) and director of their choir, Apollo functioned as the patron god of music and poetry. Hermes created the lyre for him, and the instrument became a common attribute of Apollo.

Hymns sung to Apollo were called paeans. In Hellenistic times, especially during the third century BCE, as Apollo Helios he became identified among Greeks with Helios, god of the sun, and his sister Artemis similarly equated with Selene, goddess of the moon. In Latin texts, on the other hand, Joseph Fontenrose declared himself unable to find any conflation of Apollo with Sol among the Augustan poets of the first century, not even in the conjurations of Aeneas and Latinus in Aeneid XII (161-215).

Apollo and Helios/Sol remained separate beings in literary and mythological texts until the third century CE. Antiochus II Theos (Greek: ; 286-246 BC) was a Greek king of the Hellenistic Seleucid Empire who reigned from 261 to 246 BC.

He succeeded his father Antiochus I Soter in the winter of 262-61 BC. He was the younger son of Antiochus I and princess Stratonice, the daughter of Demetrius Poliorcetes. He inherited a state of war with Ptolemaic Egypt, the "Second War", which was fought along the coasts of Asia Minor, and the constant intrigues of petty despots and restless city-states in Asia Minor. Antiochus also made some attempt to get a footing in Thrace. During the war he was given the title Theos (Greek: , "God"), being such to the Milesians in slaying the tyrant Timarchus.

During the time Antiochus was occupied with the war against Egypt, Andragoras, his satrap in Parthia, proclaimed independence. According to Justin's epitome of Pompeius Trogus, in Bactria, his satrap Diodotus also revolted in 255 BC, and founded the Greco-Bactrian Kingdom, which further expanded in India in 180 BC to form the Indo-Greek Kingdom (180-1 BC).

Then about 238 BC, Arsaces led a revolt of the Parthians against Andragoras, leading to the foundation of the Parthian Empire. These events would have cut off communications with India. Phylarchus relays current scandals regarding his drunken banquets and liaisons with unsuitable young men. About this time, Antiochus made peace with Ptolemy II Philadelphus, ending the Second War. Antiochus repudiated his wife Laodice I and exiled her to Ephesus.

Laodice I then proclaimed Seleucus II as King. With his cousin-wife Laodice I, Antiochus had two sons: Seleucus II Callinicus, Antiochus Hierax and three daughters: Apama, Stratonice of Cappadocia and Laodice.

Antiochus is mentioned in the Edicts of Ashoka, as one of the recipients of the Indian Emperor Ashoka's Buddhist proselytism. And even this conquest [preaching Buddhism] has been won by the Beloved of the Gods here and in all the borderlands, as far as six hundred yojanas (5,400-9,600 km) away, where Antiochos, king of the Yavanas [Greeks] rules, and beyond this Antiochus four kings named Ptolemy, Antigonos, Magas and Alexander rule. Ashoka also claims that he encouraged the development of herbal medicine, for men and animals, in the territories of the Hellenistic kings. Everywhere within Beloved-of-the-Gods, King Piyadasi's [Ashoka's] domain, and among the people beyond the borders, the Cholas, the Pandyas, the Satiyaputras, the Keralaputras, as far as Tamraparni and where the Greek king Antiochos rules, and among the kings who are neighbors of Antiochos, everywhere has Beloved-of-the-Gods, King Piyadasi, made provision for two types of medical treatment: medical treatment for humans and medical treatment for animals. Wherever medical herbs suitable for humans or animals are not available, I have had them imported and grown. Wherever medical roots or fruits are not available I have had them imported and grown. Along roads I have had wells dug and trees planted for the benefit of humans and animals. Seleucid Empire Seleúkeia 312 BC-63 BC The Seleucid Empire in 301 BC.

The Seleucid Empire was a Hellenistic state ruled by the Seleucid dynasty founded by Seleucus I Nicator following the division of the empire created by Alexander the Great. Seleucus received Babylonia and, from there, expanded his dominions to include much of Alexander's near eastern territories. At the height of its power, it included central Anatolia, the Levant, Mesopotamia, Kuwait, Persia, Afghanistan, Turkmenistan, and northwest parts of India. The Greek population of the cities who formed the dominant elite were reinforced by emigration from Greece. Seleucid expansion into Anatolia and Greece was abruptly halted after decisive defeats at the hands of the Roman army.

Their attempts to defeat their old enemy Ptolemaic Egypt were frustrated by Roman demands. Much of the eastern part of the empire was conquered by the Parthians under Mithridates I of Parthia in the mid-2nd century BC, yet the Seleucid kings continued to rule a rump state from the Seleukid Kingdom until the invasion by Armenian king Tigranes the Great and their ultimate overthrow by the Roman general Pompey.

How and where do I learn more about collecting ancient coins? Visit the Guide on How to Use My Store.

For on an overview about using my store, with additional information and links to all other parts of my store which may include educational information on topics you are looking for. The item "ANTIOCHOS II Theos Seleukid Ancient Silver Tetradrachm Greek Coin NGC i68744" is in sale since Saturday, April 14, 2018. This item is in the category "Coins & Paper Money\Coins\ Ancient\Greek (450 BC-100 AD)".