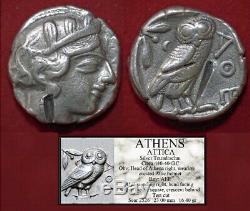 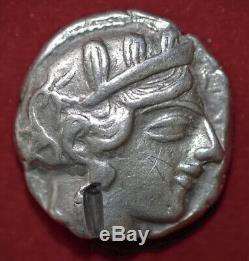 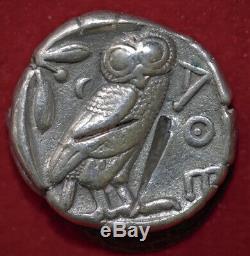 We are offering 1000+ ancient coins collection. ALL COINS ARE GENUINE LIFETIME GUARANTEE. The attribution label is printed on archival museum quality paper.

A most famous ancient silver coin! Head of helmeted Athena on obverse and owl on reverse. This coin comes with attribution label printed on museum quality paper attached as pictured. A great way to display an ancient coins collection! Only within the continental U.

Athena holding a helmet and a spear, with an owl. Attributed to the Brygos Painter (circa 490480 BC). The Metropolitan Museum of Art. First struck sometime between 525 and 510 B. With silver from the nearby mines of Laurium, the Silver Tetradrachms of Athens bore extraordinary significance across the history of Ancient Greece. They were heavily circulated all across Greece, and examples have been discovered as far away as the deserts of Arabia and even the jungles of India.

According to the Ancient Greek historian, Philochorus, this Athenian Tetradrachm was known to the Greeks as a glaux, or little owl. This was because the reverse design depicted a species of owl common to the region, the little owl or Athene noctua. This owl was a symbol of the citys patron goddess, Athena, who is depicted on the obverse. Because these coins were so visually distinct with standard weights and high silver content, they soon began circulating across much of the known world. Deep test cuts or bankers marks were a widely practiced method for testing coins.

The cut would displace the metal and allow the solid silver core of the coin to be seen, but the cut did not actually remove any of the silver content. It can sometimes be difficult to find examples of the coins from this time without test cuts. History of the Athenian Owl Tetradrachm. Although the designs of the Athens Tetradrachm remained unchanged over the centuries, the coins experienced many significant changes in other ways. Stylistically, these Owl Tetradrachms can be divided into three major periods.

Each era brought change to the thickness and diameter of the planchet and the style of the design. The first era is characterized by thick, dumpy planchets that were crudely struck. These visually stunning coins belong to the Archaic period of Greek art. Minted from approximately 525/510 through the mid fifth century B.

These coins circulated in great numbers to finance the rising society in Athens. Both Athena and the owl are unusually beautiful in their primitively rendered style and complex proportions. The Classical period of Greek art centered on the conscious attempt to render animals and humans more realistically. During the period of approximately 465 404 B.

The Tetradrachm design was re-imagined with a more lifelike Athena and owl. Always a favorite with collectors, these coins are thick, heavy, and have deeply struck images. Most collectors, including myself, agree that this era represents the classic and most popular Athenian Owl design. The last era of the Owl coinage was also the longest era, dating from approximately 404 B. To about the middle of the first century B. This era included several transitional style coins, but ultimately was a migration away from the classical style to the Hellenistic period of Greek art. The designs became fully lifelike, but the size and thickness of the planchet was modified. Coins issued later in this Period were a type of Ancient Coins known as stephanophorus, or wreath bearers due to a wreath surrounding the owl design on the reverse. If you have a problem with your item please refrain from leaving negative or neutral feedback until you have made contact and given a fair chance to rectify the situation.

As always, every effort is made to ensure that your shopping experience meets or exceeds your expectations. The item "Ancient Greek Coin Attica ATHENA and OWL Silver Tetradrachm" is in sale since Thursday, January 2, 2020.