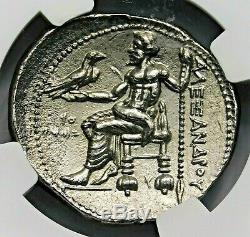 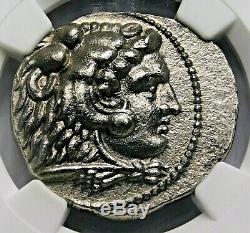 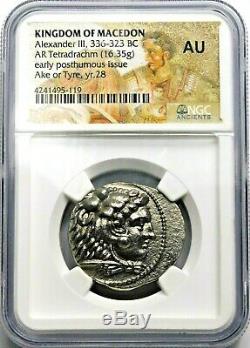 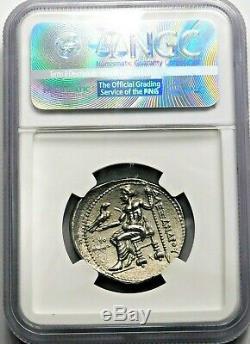 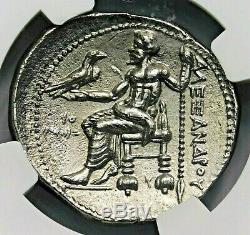 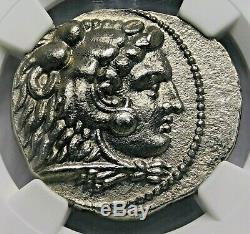 Alexander the Great (336-323 BC) AR tetradrachm (16.35 gm) Lifetime or early posthumous issue of Tyre, dated RY 28 of Azemilkos (322/1 BC). Obv: Head of Heracles right, wearing lion-skin headdress, paws tied before neck. This coin is guaranteed for life to be a genuine ancient coin. Here at Ancient Auctions we have pledged to uphold the highest ethical standards. Alexander III of Macedon (20/21 July 356 BC - 10/11 June 323 BC), commonly known as Alexander the Great, was a king (basileus) of the Ancient Greek kingdom of Macedon and a member of the Argead dynasty.

Following the conquest of Anatolia, Alexander broke the power of Persia in a series of decisive battles, most notably the battles of Issus and Gaugamela. He subsequently overthrew Persian King Darius III and conquered the Achaemenid Empire in its entirety. At that point, his empire stretched from the Adriatic Sea to the Indus River. He sought to reach the "ends of the world and the Great Outer Sea" and invaded India in 326 BC, winning an important victory over the Pauravas at the Battle of the Hydaspes. He eventually turned back at the demand of his homesick troops. Alexander died in Babylon in 323 BC, the city that he planned to establish as his capital, without executing a series of planned campaigns that would have begun with an invasion of Arabia. In the years following his death, a series of civil wars tore his empire apart, resulting in the establishment of several states ruled by the Diadochi, Alexander's surviving generals and heirs. Alexander's legacy includes the cultural diffusion and syncretism which his conquests engendered, such as Greco-Buddhism. He founded some twenty cities that bore his name, most notably Alexandria in Egypt. Alexander's settlement of Greek colonists and the resulting spread of Greek culture in the east resulted in a new Hellenistic civilization, aspects of which were still evident in the traditions of the Byzantine Empire in the mid-15th century AD and the presence of Greek speakers in central and far eastern Anatolia until the 1920s. Alexander became legendary as a classical hero in the mold of Achilles, and he features prominently in the history and mythic traditions of both Greek and non-Greek cultures. He became the measure against which military leaders compared themselves, and military academies throughout the world still teach his tactics. He is often ranked among the most influential people in human history. International Buyers - Please Note. The item "Alexander the Great (336-323 BC) Stunning Tetradrachm. Ancient Greek Silver Coin" is in sale since Sunday, January 5, 2020. This item is in the category "Coins & Paper Money\Coins\ Ancient\Greek (450 BC-100 AD)". The seller is "ancientauctions" and is located in Fort Lauderdale, Florida. This item can be shipped worldwide.