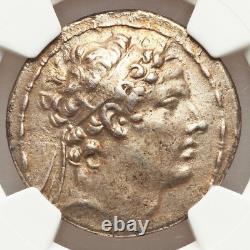 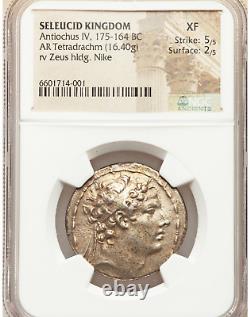 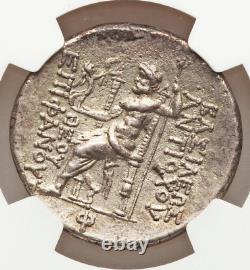 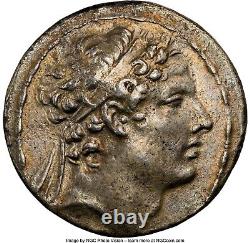 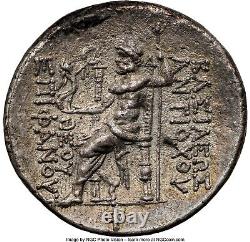 A half ounce of silver of historic and biblical significance. This coin was struck in the time of the Antiochus from the Hanukkah story recounted in the Books of Maccabees, the Talmud, and by Josephus. The Jewish historian Titus Flavius Josephus narrates in his book, Jewish Antiquities XII, how the victorious Judas Maccabeus ordered lavish yearly eight-day festivities after rededicating the Temple in Jerusalem that had been profaned by Antiochus IV Epiphanes. Josephus does not say the festival was called Hanukkah but rather the "Festival of Lights". Now Judas celebrated the festival of the restoration of the sacrifices of the temple for eight days, and omitted no sort of pleasures thereon; but he feasted them upon very rich and splendid sacrifices; and he honored God, and delighted them by hymns and psalms.

And from that time to this we celebrate this festival, and call it Lights. I suppose the reason was because this liberty beyond our hopes appeared to us; and that thence was the name given to that festival. Judas also rebuilt the walls round about the city, and reared towers of great height against the incursions of enemies, and set guards therein. He also fortified the city Bethsura, that it might serve as a citadel against any distresses that might come from our enemies.

EOS / ANTIOXOY / TEOY / E? IFANOYS / Zeus seated left on backless throne, Nike crowning royal name in right hand, scepter in left; F in exergue. This item is in the category "Coins & Paper Money\Coins: Ancient\Greek (450 BC-100 AD)". The seller is "silvermangold" and is located in this country: US.