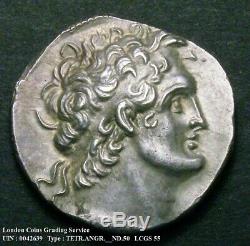 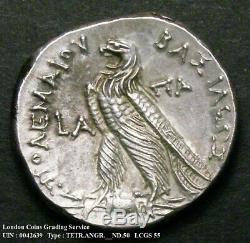 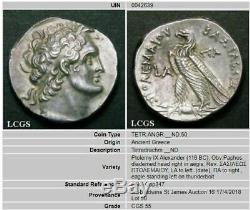 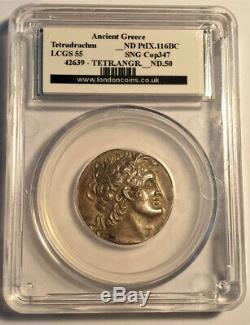 116 BC Ptolemy IX Tetradrachm LCGC 55 SNG Copenhagen 347. After the murder of his elder brother in 130 BC, during a civil war between Ptolemy VIII and Cleopatra II, Ptolemy IX became the heir apparent. On his father's death in 116 BC, he became co-regent with Cleopatra II (until 115 BC) and with Cleopatra III.

He eventually quarrelled with his mother and in 107 BC, she deposed him and replaced him with his younger brother Ptolemy X. However, Ptolemy IX succeeded in seizing control of Cyprus.

From there he invaded Judaea but was prevented by Ptolemy X from invading Egypt. In 88 BC, the Alexandrians expelled Ptolemy X and restored Ptolemy IX to the throne. He reigned alone until 81 BC, when he appointed his daughter Berenice III as co-regent shortly before his own death.

Graded extremely fine by Baldwins of St. Check out my investment coins in my shop.

The seller is "goldguineas" and is located in Torquay. This item can be shipped worldwide.James Auction 16 17/4/2018 Lot 58