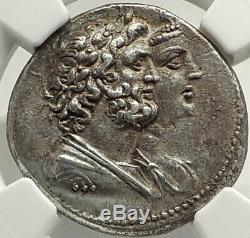 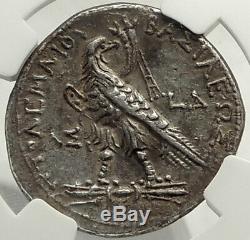 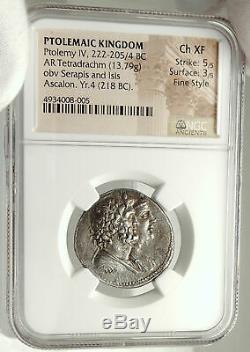 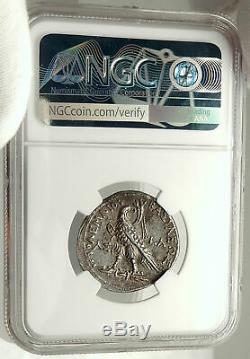 Ptolemy IV Philopator (Greek: Ptolemaos Philopátr ; reigned 221-204 BC), son of Ptolemy III and Berenice II of Egypt, was the fourth Pharaoh of Ptolemaic Egypt. Under the reign of Ptolemy IV, the decline of the Ptolemaic dynasty began. Among the children of Ptolemy IV Philopator and Arsinoe III of Egypt was Ptolemy V Epiphanes, who married Cleopatra I Syra, daughter of Antiochus III the Great and Laodice III. Ptolemy IV's reign was inaugurated by the murder of his mother, and he was always under the dominion of favourites, male and female, who indulged his vices and conducted the government as they pleased. Self-interest led his ministers to make serious preparations to meet the attacks of Antiochus III the Great on Coele-Syria including Judea, and the great Egyptian victory of Raphia (217 BC), where Ptolemy himself was present, secured the northern borders of the kingdom for the remainder of his reign.

The arming of Egyptians in this campaign had a disturbing effect upon the native population of Egypt, leading to the secession of Upper Egypt under pharaohs Harmachis (also known as Hugronaphor) and Ankmachis (also known as Chaonnophris), thus creating a kingdom that occupied much of the country and lasted nearly twenty years. Philopator was devoted to orgiastic forms of religion and literary dilettantism. He built a temple to Homer and composed a tragedy, to which his favourite Agathocles added a commentary. He married (about 220 BC) his sister Arsinoë III, but continued to be ruled by his mistress Agathoclea, sister of Agathocles. 210 BC, Agathoclea may have given birth to a son from her affair with Ptolemy IV, who may have died shortly after his birth.

This showpiece galley was built for Ptolemy IV and was described by Callixenus of Rhodes, writing in the 3rd century BC, and quoted by Athenaeus in the 2nd century AD. Plutarch also mentions that Ptolemy Philopator owned this immense vessel in his Life of Demetrios. Ptolemy IV is a major antagonist of the apocryphal 3 Maccabees, which describes purported events following the Battle of Raphia, in both Jerusalem and Alexandria. Ptolemy IV's reign was also marked by trade with other contemporaneous polities.

In the 1930s, excavations by Mattingly at a fortress close to Port Dunford (the likely Nikon of antiquity) in present-day southern Somalia yielded a number of Ptolemaic coins. Among these pieces were 17 copper mints from the Ptolemy III, Ptolemy IV and Ptolemy V dynasties, as well as late Imperial Rome and Mamluk Sultanate coins.

The Ptolemaic Kingdom was a Hellenistic kingdom based in Egypt. It was ruled by the Ptolemaic dynasty which started with Ptolemy I Soter's accession after the death of Alexander the Great in 323 BC- and which ended with the death of Cleopatra VII and the Roman conquest in 30 BC. The Ptolemaic Kingdom was founded in 305 BC by Ptolemy I Soter, who declared himself Pharaoh of Egypt and created a powerful Hellenistic dynasty that ruled an area stretching from southern Seleukid Kingdom to Cyrene and south to Nubia. Alexandria became the capital city and a major center of Greek culture and trade. To gain recognition by the native Egyptian populace, they named themselves the successors to the Pharaohs.

The later Ptolemies took on Egyptian traditions by marrying their siblings, had themselves portrayed on public monuments in Egyptian style and dress, and participated in Egyptian religious life. The Ptolemies had to fight native rebellions and were involved in foreign and civil wars that led to the decline of the kingdom and its final annexation by Rome. Hellenistic culture continued to thrive in Egypt throughout the Roman and Byzantine periods until the Muslim conquest. The item "PTOLEMY IV & Arsinoe 219BC Ascalon Silver Greek Tetradrachm NGC ChXF Fine Style" is in sale since Thursday, March 21, 2019. This item is in the category "Coins & Paper Money\Coins\ Ancient\Greek (450 BC-100 AD)".