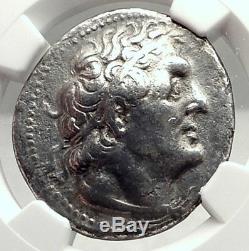 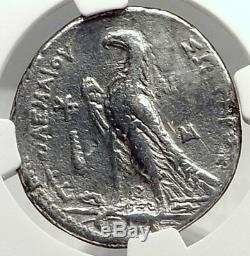 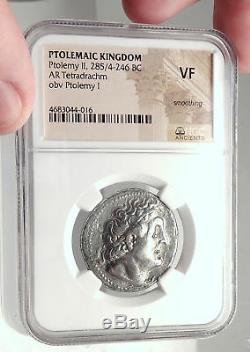 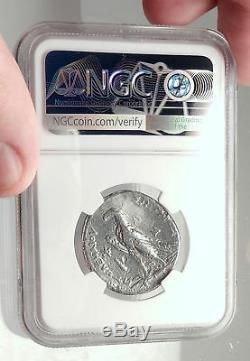 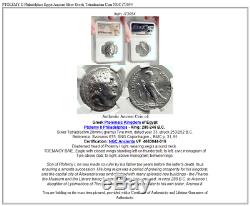 VF 4683044-016 Diademed head of Ptolemy I right, wearing aegis around neck. TOEMAIOY BAIE, Eagle with closed wings standing left on thunderbolt; to left, civic monogram of Tyre above club; to right, above monogram; between legs. Son of Ptolemy I, he was made co-ruler by his father two years before the latter's death, thus ensuring a smooth succession. His long reign was a period of growing prosperity for his kingdom, and the capital city of Alexandria was embellished with many splendid new buildings - the Pharos, the Museum and the Library being foremost. He was twice married: in circa 288 B.

To Arsinoe I, daughter of Lysimachos of Thrace; and about twelve years later to his own sister, Arsinoe II. Ptolemy II Philadelphus (Greek: , Ptolemaos Philádelphos 309 BC-246 BC), was the king of Ptolemaic Egypt from 283 BC to 246 BC. He was the son of the founder of the Ptolemaic kingdom Ptolemy I Soter and Berenice, and was educated by Philitas of Cos. He had two half-brothers, Ptolemy Keraunos and Meleager, both of whom became kings of Macedonia (in 281 BC and 279 BC respectively). Both died in the Gallic invasion of 280-279 BC (see Brennus). As did the Ptolemy's III through V, Ptolemy II erected a commemmorative stele, the Great Mendes Stela. He began his reign as co-regent with his father Ptolemy I from ca.

283 BCE, and maintained a splendid court in Alexandria. Egypt was involved in several wars during his reign. Magas of Cyrene opened war on his half-brother (274 BC), and the Seleucid king Antiochus I Soter, desiring Coele-Syria with Judea, attacked soon after in the First Syrian War. Two or three years of war followed. Egypt's victories solidified the kingdom's position as the undisputed naval power of the eastern Mediterranean; the Ptolemaic sphere of power extended over the Cyclades to Samothrace, and the harbours and coast towns of Cilicia Trachea, Pamphylia, Lycia and Caria.

The victory won by Antigonus II Gonatas, king of Macedonia, over the Egyptian fleet at Cos (between 258 BC and 256 BC) did not long interrupt Ptolemy's command of the Aegean Sea. In a Second Syrian War with the Seleucid kingdom, under Antiochus II Theos (after 260 BC), Ptolemy sustained losses on the seaboard of Asia Minor and agreed to a peace by which Antiochus married his daughter Berenice c.

Ptolemy's first wife, Arsinoë I, daughter of Lysimachus, was the mother of his legitimate children. After her repudiation he married his full sister Arsinoë II, the widow of Lysimachus-an Egyptian custom-which brought him her Aegean possessions.

The material and literary splendour of the Alexandrian court was at its height under Ptolemy II. Ptolemy deified his parents and his sister-wife, after her death (270 BC). Ptolemy staged a procession in Alexandria in honor of Dionysus led by 24 chariots drawn by elephants and a procession of lions, leopards, panthers, camels, antelopes, wild asses, ostriches, a bear, a giraffe and a rhinoceros. According to scholars, most of the animals were in pairs - as many as eight pairs of ostriches - and although the ordinary chariots were likely led by a single elephant, others which carried a 7 foot tall golden statue may have been led by four. Callimachus, keeper of the library, Theocritus, and a host of lesser poets, glorified the Ptolemaic family.

Ptolemy himself was eager to increase the library and to patronize scientific research. He had exotic animals of far off lands sent to Alexandria. Although an enthusiast for Hellenic culture, he also adopted Egyptian religious concepts, which helped to bolster his image as a sovereign. The tradition preserved in the pseudepigraphical Letter of Aristeas which connects the Septuagint translation of the Old Testament into Greek with his patronage is probably overdrawn.

However, Walter Kaiser says, There can be little doubt that the Law was translated in Philadelphus's time since Greek quotations from Genesis and Exodus appear in Greek literature before 200 B. The language of the Septuagint is more like Egyptian Greek than it is like Jerusalemite Greek, according to some. Ptolemy had many brilliant mistresses, and his court, magnificent and dissolute, intellectual and artificial, has been compared with the Versailles of Louis XIV. Ptolemy was of a delicate constitution. Elias Joseph Bickermann Chronology of the Ancient World , 2nd ed.

1980 gives the date of his death as January 29. Ptolemy is recorded by Pliny the Elder as having sent an ambassador named Dionysius to the Mauryan court at Pataliputra in India, probably to Emperor Ashoka. But [India] has been treated of by several other Greek writers who resided at the courts of Indian kings, such, for instance, as Megasthenes, and by Dionysius, who was sent thither by Philadelphus, expressly for the purpose: all of whom have enlarged upon the power and vast resources of these nations. " Pliny the Elder, "The Natural History, Chap. He is also mentioned in the Edicts of Ashoka as a recipient of the Buddhist proselytism of Ashoka, although no Western historical record of this event remain.

The Ptolemaic Kingdom was a Hellenistic kingdom based in Egypt. It was ruled by the Ptolemaic dynasty which started with Ptolemy I Soter's accession after the death of Alexander the Great in 323 BC- and which ended with the death of Cleopatra VII and the Roman conquest in 30 BC. The Ptolemaic Kingdom was founded in 305 BC by Ptolemy I Soter, who declared himself Pharaoh of Egypt and created a powerful Hellenistic dynasty that ruled an area stretching from southern Seleukid Kingdom to Cyrene and south to Nubia.

Alexandria became the capital city and a major center of Greek culture and trade. To gain recognition by the native Egyptian populace, they named themselves the successors to the Pharaohs. The later Ptolemies took on Egyptian traditions by marrying their siblings, had themselves portrayed on public monuments in Egyptian style and dress, and participated in Egyptian religious life. The Ptolemies had to fight native rebellions and were involved in foreign and civil wars that led to the decline of the kingdom and its final annexation by Rome. Hellenistic culture continued to thrive in Egypt throughout the Roman and Byzantine periods until the Muslim conquest.

Whether your goal is to collect or give the item as a gift, coins presented like this could be more prized and valued higher than items that were not given such care and attention to. When should I leave feedback?

How and where do I learn more about collecting ancient coins? Visit the Guide on How to Use My Store. For on an overview about using my store, with additional information and links to all other parts of my store which may include educational information on topics you are looking for. The item "PTOLEMY II Philadelphos Egypt Ancient Silver Greek Tetradrachm Coin NGC i73054" is in sale since Thursday, October 25, 2018. This item is in the category "Coins & Paper Money\Coins\ Ancient\Greek (450 BC-100 AD)".