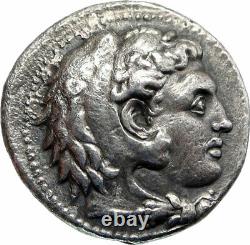 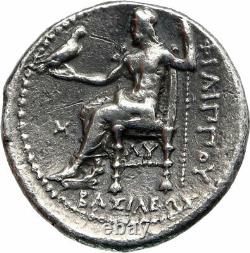 Greek Coin of Macedonian Kingdom. Silver Tetradrachm 26mm (16.86 grams) Bab ylon mint, struck cira 323-317 B. Head of Alexander the Great as Hercules. Right, wearing the lion-skin headdress. IIOY-BAIE, Zeus enthroned left, right leg drawn back, feet on stool, eagle in right hand, scepter in left; M in left field, Y above strut. Philip III Arrhidaeus Greek; ca. 359 BC - December 25, 317 BC was the king of Macedon from after June 11, 323 BC until his death. He was a son of King Philip II of Macedon by Philinna of Larissa, allegedly a Thessalian dancer, and a half-brother of Alexander the Great. Named Arrhidaeus at birth, he assumed the name Philip when he ascended to the throne. In Plutarch's report, he became both physically and mentally disabled following a poisoning attempt by Philip II's wife, Queen Olympias, who wanted to eliminate a possible rival to her son Alexander.

However, this may just be malicious gossip, and there is no evidence that Olympias really caused her stepson's condition. Alexander was very fond of him, and took him on his campaigns, both to protect his life and to ensure he would not be used as a pawn in a challenge for the throne.

After Alexander's death in Babylon, Arrhidaeus was proclaimed king by the Macedonian army in Asia. However, he was a mere figurehead, and a pawn of the powerful generals, one after the other. His reign and his life did not last long. The crater Ariadaeus on the Moon is named after him.

He appears to have never been a danger for Alexander's succession to Philip II, notwithstanding their being of about the same age; all the same, when the satrap of Caria Pixodarus proposed his daughter in marriage to Philip, who offered Arrhidaeus as husband, Alexander thought it prudent to block the operation, with considerable irritation of his father (337 BC). Arrhidaeus' whereabouts under the reign of his brother Alexander are unclear; what is certain is that no civil or military command was given him in those thirteen years (336 BCâ323 BC). He was at Babylon at the time of Alexander's death, the 11 June 323 BC.

A succession crisis erupted: Arrhidaeus was the most obvious candidate, but he was mentally unfit to rule. A conflict exploded between Perdiccas, leader of the cavalry, and Meleager, who commanded the phalanx: the first wanted to wait to see if Roxana, Alexander's pregnant wife, would deliver a male baby, while the second objected that Arrhidaeus was the closest relative living and so should be chosen king. Meleager was killed, and a compromise was engineered: Arrhidaeus would become king with the name of Philip, and he would be joined by Roxana's son as co-sovereign should he prove a male, as he did, and joined his uncle with the name of Alexander.

It was immediately decided that Philip Arrhidaeus would reign, but not rule: this was to be the prerogative of the new regent, Perdiccas. When news arrived in Macedon that Arrhidaeus had been chosen as king, Cynane, a daughter of Philip II, matured the design to travel to Asia and offer the new king her daughter Eurydice for wife. This move was an obvious affront to the regent, whom Cynane had completely bypassed: to prevent the move Perdiccas sent his brother Alcetas to kill Cynane, but reactions among the troops generated by this murder was such that the regent had to give up and accept the marriage.

From that moment on Philip Arrhidaeus was to be under the sway of his bride, a proud and determined woman bent on substantiating her husband's power. Eurydice's chance came when the first war of the Diadochi sealed the fate of Perdiccas, making a new settlement necessary; settlement that was made at Triparadisus in Syria in 320 BC. Eurydice moved deftly enough to obtain the removal of the first two designed regents, Peithon and Arrhidaeus, but was powerless to block the too powerful Antipater: the latter was made new regent and Philip Arrhidaeus and his wife were forced to follow him to Macedon.

The regent died of natural causes the following year, nominating as his successor not his son Cassander, but a friend of his, Polyperchon. Cassander's refusal to accept his father's decision sparked the second war of the Diadochi, in which Eurydice saw once again a chance to free Philip from the control of the regent. An opportunity presented itself in 317 BC, when Cassander expelled Polyperchon from Macedon: Eurydice immediately allied herself with him and made her husband nominate him new regent, and Cassander reciprocated by leaving her in full control of the country when he left to campaign in Greece.

But all this was to prove exceedingly volatile: that same year (317) Polyperchon and Olympias, allied with the king of Epirus Aeacides, invaded Macedon, while the Macedonian troops refused to fight the son of Alexander, whom the invaders had brought with them. Philip and Eurydice had no choice but to escape, only to be captured at Amphipolis and thrown into prison. It soon became clear that Philip was too dangerous to be left alive, as many enemies of Olympias saw him as a useful tool against her, and so on December 25 317 BC she had him executed, while his wife was forced to commit suicide. The following year, when Cassander reconquered Macedon and avenged Philip's death, he interred the bodies of Philip and Eurydice with royal pomp at Aegae, and celebrated funeral games to their honour. In 1977 important excavations were made near Vergina leading to the discovery of a two-chambered royal tomb, with an almost perfectly conserved male skeleton. Manolis Andronikos, the chief archaeologist on the ground and the majority of archaeologists, decided it was the skeleton of Philip II, but many have disputed this attribution and instead proposed it to be the remains of Philip Arrhidaeus. Subsequent forensic reconstruction of the skull contained in the gold Larnax (cremains container) clearly demonstrates damage to the right eye socket of the skull in keeping with historical accounts that Philip II had been struck by an arrow in the right eye and as a consequence, had been severely disfigured. See Prag, John and Richard Neave: Making Faces: Using Forensic and Archaelogical Evidence (British Museum Press: 1997).

Macedonia or Macedon was an ancient kingdom on the northern periphery of Classical Greece and later the dominant state of Hellenistic Greece. It was ruled during most of its existence initially by the legendary founding dynasty of the Argeads, the intermittent Antipatrids and finally the Antigonids. Home to the Macedonians, the earliest kingdom was centered on the northeastern part of the Greek peninsula, bordered by Epirus to the west, Paeonia to the north, the region of Thrace to the east and Thessaly to the south. The rise of Macedon, from a small kingdom at the fringe of typical Greek city states affairs, to one which came to control the fate of the entire Hellenic world, occurred under the reign of Philip II. With the innovative Macedonian army, he defeated the old powers of Athens and Thebes in the decisive Battle of Chaeronea in 338 BC and subdued them, while keeping Sparta in check.

His son Alexander the Great pursued his father's effort to command the whole of Greece through the federation of Greek states, a feat he finally accomplished after destroying a revolting Thebes. Young Alexander was then ready to lead this force, as he aspired, in a large campaign against the Achaemenid Empire, in retaliation for the invasion of Greece in the 5th century BC. In the ensuing wars of Alexander the Great, he was ultimately successful in conquering a territory that came to stretch as far as the Indus River.

For a brief period his Macedonian Empire was the most powerful in the world, the definitive Hellenistic state, inaugurating the transition to this new period of Ancient Greek civilization. Greek arts and literature flourished in the new conquered lands and advancements in philosophy and science were spread to the ancient world. Of most importance were the contributions of Aristotle, a teacher to Alexander, whose teachings carried on many centuries past his death. After the death of Alexander the Great in 323 BC, the following wars of the Diadochi and the partitioning of his short-lived empire, Macedonia proper carried on as a Greek cultural and political center in the Mediterranean region along with Ptolemaic Egypt, the Seleucid Empire, and the Attalid kingdom.

Important cities like Pella, Pydna, and Amphipolis were involved in power struggles for control of the territory, and new cities were founded, like Thessalonica by the usurper Cassander, which is now the second largest city of modern day Greece. Macedonia's decline of influence began with the rise of Rome until its ultimate subjection during the second Macedonian Wars. The Roman province of Macedonia (Latin: Provincia Macedoniae , Greek:) was officially established in 146 BC, after the Roman general Quintus Caecilius Metellus defeated Andriscus of Macedon, the last self-styled King of the ancient kingdom of Macedonia in 148 BC, and after the four client republics (the "tetrarchy") established by Rome in the region were dissolved. The province incorporated ancient Macedonia, with the addition of Epirus, Thessaly, and parts of Illyria, Paeonia and Thrace. This created a much larger administrative area, to which the name of'Macedonia' was still applied. The Dardanians, to the north of the Paeonians, were not included, because they had supported the Romans in their conquest of Macedonia. World-renowned expert numismatist, enthusiast, author and dealer in authentic ancient Greek, ancient Roman, ancient Byzantine, world coins & more. Ilya Zlobin is an independent individual who has a passion for coin collecting, research and understanding the importance of the historical context and significance all coins and objects represent. Send me a message about this and I can update your invoice should you want this method. Getting your order to you, quickly and securely is a top priority and is taken seriously here. Great care is taken in packaging and mailing every item securely and quickly. What is a certificate of authenticity and what guarantees do you give that the item is authentic? You will be very happy with what you get with the COA; a professional presentation of the coin, with all of the relevant information and a picture of the coin you saw in the listing. Additionally, the coin is inside it's own protective coin flip (holder), with a 2x2 inch description of the coin matching the individual number on the COA. Whether your goal is to collect or give the item as a gift, coins presented like this could be more prized and valued higher than items that were not given such care and attention to. When should I leave feedback? Please don't leave any negative feedbacks, as it happens sometimes that people rush to leave feedback before letting sufficient time for their order to arrive. The matter of fact is that any issues can be resolved, as reputation is most important to me. My goal is to provide superior products and quality of service. How and where do I learn more about collecting ancient coins?

Visit the Guide on How to Use My Store. For on an overview about using my store, with additional information and links to all other parts of my store which may include educational information on topics you are looking for. The item "PHILIP III Authentic Ancient 323BC Genuine Silver Greek Tetradrachm Coin i85506" is in sale since Wednesday, August 12, 2020. This item is in the category "Coins & Paper Money\Coins\ Ancient\Greek (450 BC-100 AD)". The seller is "highrating_lowprice" and is located in Rego Park, New York.