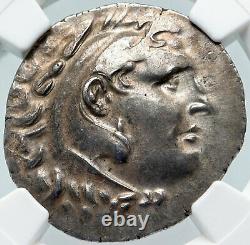 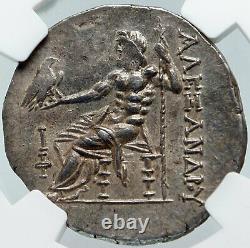 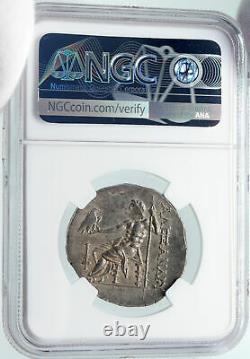 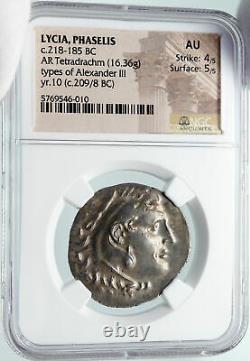 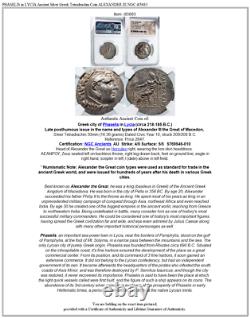 Numismatic Note: Alexander the Great coin types were used as standard for trade in the ancient Greek world, and were issued for hundreds of years after his death in various Greek cities. Best known as Alexander the Great , he was a king (basileus in Greek) of the Ancient Greek kingdom of Macedonia. He was born in the city of Pella in 356 BC.

By age 20, Alexander succeeded his father Philip II to the throne as king. He spent most of his years as king in an unprecedented military campaign of conquest through Asia, northeast Africa and even reached India. By age 30 he created one of the biggest empires in the ancient world, reaching from Greece to northwestern India. Being undefeated in battle, many consider him as one of history's most successful military commanders. He could be considered one of history's most important figures, having spread the Greek civilization far and wide, and was even admired by Julius Caesar along with many other important historical personages as well. Phaselis , an important sea-power town in Lycia, near the borders of Pamphylia, stood on the gulf of Pamphylia, at the foot of Mt. Solyma, in a narrow pass between the mountains and the sea. The only Lycian city of purely Greek origin, Phaselis was founded from Rhodes circa 690 B. Situated on the inhospitable coast, it's fine harbors ensured the development of the place as a great commercial center. From its position, and its command of 3 fine harbors, it soon gained an extensive commerce. It did not belong to the Lycian confederacy, but had an independent government of its own. It became afterwards the headquarters of the pirates who infested the south coasts of Asia Minor, and was therefore destroyed by P.

Servilius Isauricus; and though the city was restored, it never recovered its importance. The abundance of its 3rd century silver coinage is evidence of the prosperity of Phaselis in early Hellenistic times, a period of numismatic inactivity at the native Lycian mints. Alexander III of Macedon (20/21 July 356 BC - 10/11 June 323 BC), commonly known as Alexander the Great , was a king (basileus) of the Ancient Greek kingdom of Macedon and a member of the Argead dynasty. Born in Pella in 356 BC, Alexander succeeded his father, Philip II, to the throne at the age of twenty.

He spent most of his ruling years on an unprecedented military campaign through Asia and northeast Africa, and by the age of thirty he had created one of the largest empires of the ancient world, stretching from Greece to northwestern India. He was undefeated in battle and is widely considered one of history's most successful military commanders.

During his youth, Alexander was tutored by the philosopher Aristotle until the age of 16. After Philip's assassination in 336 BC, Alexander succeeded his father to the throne and inherited a strong kingdom and an experienced army. Alexander was awarded the generalship of Greece and used this authority to launch his father's Panhellenic project to lead the Greeks in the conquest of Persia. In 334 BC, he invaded the Achaemenid Empire, and began a series of campaigns that lasted ten years. Following the conquest of Asia Minor, Alexander broke the power of Persia in a series of decisive battles, most notably the battles of Issus and Gaugamela. He subsequently overthrew the Persian King Darius III and conquered the Achaemenid Empire in its entirety. At that point, his empire stretched from the Adriatic Sea to the Indus River.

Seeking to reach the "ends of the world and the Great Outer Sea", he invaded India in 326 BC, but eventually turned back at the demand of his homesick troops. Alexander died in Babylon in 323 BC, the city he planned to establish as his capital, without executing a series of planned campaigns that would have begun with an invasion of Arabia. In the years following his death, a series of civil wars tore his empire apart, resulting in several states ruled by the Diadochi, Alexander's surviving generals and heirs. Alexander's legacy includes the cultural diffusion his conquests engendered, such as Greco-Buddhism.

Alexander became legendary as a classical hero in the mold of Achilles, and he features prominently in the history and mythic traditions of both Greek and non-Greek cultures. He became the measure against which military leaders compared themselves, and military academies throughout the world still teach his tactics. He is often ranked among the most influential people in human history, along with his teacher Aristotle.

Phaselis was an ancient Greek and Roman city on the coast of Lycia. Its ruins are located north of the modern town Tekirova in the Kemer district of Antalya Province in Turkey. It lies between the Bey Mountains and the forests of Olympos National Park, 16 km west of the touristic town of Kemer and on the 57th kilometre of the Antalya-Kumluca highway.

Phaselis and other ancient towns around the shore can also be accessed from the sea by daily yacht tours. The town was set up by the Rhodians in 700 BC. Because of its location on an isthmus separating two harbours, it became the most important harbour city of the western Lycia and an important centre of commerce between Greece, Asia, Egypt, and Phoenicia, although it did not belong to the Lycian League. The city was captured by Persians after they conquered Asia Minor, and was later captured by Alexander the Great. After the death of Alexander, the city remained in Egyptian hands from 209 BC to 197 BC, under the dynasty of Ptolemaios, and with the conclusion of the Apamea treaty, was handed over to the Kingdom of Rhodes, together with the other cities of Lycia.

From 190 BC to 160 BC it remained under Rhodeian hegemony, but after 160 BC it was absorbed into the Lycian confederacy under Roman rule. Phaselis, like Olympos, was under constant threat from pirates in the 1st century BC, and the city was even taken over by the pirate Zekenites for a period until his defeat by the Romans. In 42 BC Brutus had the city linked to Rome.

During the Byzantine period, the city became a bishopric, although in the 3rd century AD, its convenient harbor had fallen under the threat of pirates once again. So it began to lose importance, suffering further losses at the hands of Arab ships, until totally impoverished in the 11th century AD.

There was a temple of Athene at Phaselis, where the lance of Achilles was exhibited. It was the birthplace of the poet and orator Theodectes. It was also renowned for its roses, from which the essence was extracted. When the Seljuqs began to concentrate on Alanya and Antalya as ports, Phaselis ceased to be a port of any note.

Phaselis has three harbours: the'Northern Harbour', the'Battle Harbour' and the'Protected (Sun) Harbour', of which the last is the most important today. A 24-metre-wide ancient street runs through the middle of the city. The'Hadrian Waterway Gate' is on the southern part of the street. There are ruins of shops and stores on the sides of the street and near these are ruins of public places such as Roman baths, agoras and theatres. These structures are dated to the 2nd century BC.

There are water canals between the town centre and the 70 m plateau. There are also numerous sarcophagi. Lycia was a geopolitical region in Anatolia in what are now the provinces of Antalya and Mula on the southern coast of Turkey, and Burdur Province inland. Known to history since the records of ancient Egypt and the Hittite Empire in the Late Bronze Age, it was populated by speakers of the Luwian language group. Written records began to be inscribed in stone in the Lycian language (a later form of Luwian) after Lycia's involuntary incorporation into the Achaemenid Empire in the Iron Age.

At that time (546 BC) the Luwian speakers were decimated, and Lycia received an influx of Persian speakers. Lycia fought for the Persians in the Persian Wars, but on the defeat of the Achaemenid Empire by the Greeks, it became intermittently a free agent. Due to the influx of Greek speakers and the sparsity of the remaining Lycian speakers, Lycia was totally Hellenized under the Macedonians. The Lycian language disappeared from inscriptions and coinage.

On defeating Antiochus III in 188 BC the Romans gave Lycia to Rhodes for 20 years, taking it back in 168 BC. In these latter stages of the Roman republic Lycia came to enjoy freedom as part of the Roman protectorate. The Romans validated home rule officially under the Lycian League in 168 BC.

This native government was an early federation with republican principles; these later came to the attention of the framers of the United States Constitution, influencing their thoughts. Despite home rule under republican principles Lycia was not a sovereign state and had not been since its defeat by the Carians. In 43 AD the Roman emperor Claudius dissolved the league. Lycia was incorporated into the Roman Empire with a provincial status.

It became an eparchy of the Eastern, or Byzantine Empire, continuing to speak Greek even after being joined by communities of Turkish language speakers in the early 2nd millennium. After the fall of the Byzantine Empire in the 15th century, Lycia was under the Ottoman Empire, and was inherited by the Turkish Republic on the fall of that empire. The Greeks were withdrawn when the border between Greece and Turkey was negotiated in 1923.

World-renowned expert numismatist, enthusiast, author and dealer in authentic ancient Greek, ancient Roman, ancient Byzantine, world coins & more. Ilya Zlobin is an independent individual who has a passion for coin collecting, research and understanding the importance of the historical context and significance all coins and objects represent. Send me a message about this and I can update your invoice should you want this method. Getting your order to you, quickly and securely is a top priority and is taken seriously here. Great care is taken in packaging and mailing every item securely and quickly. What is a certificate of authenticity and what guarantees do you give that the item is authentic? You will be very happy with what you get with the COA; a professional presentation of the coin, with all of the relevant information and a picture of the coin you saw in the listing. Additionally, the coin is inside it's own protective coin flip (holder), with a 2x2 inch description of the coin matching the individual number on the COA. Whether your goal is to collect or give the item as a gift, coins presented like this could be more prized and valued higher than items that were not given such care and attention to.

How and where do I learn more about collecting ancient coins? Visit the Guide on How to Use My Store. For on an overview about using my store, with additional information and links to all other parts of my store which may include educational information on topics you are looking for. The item "PHASELIS in LYCIA Ancient Silver Greek Tetradrachm Coin ALEXANDER III NGC i85683" is in sale since Tuesday, August 18, 2020.