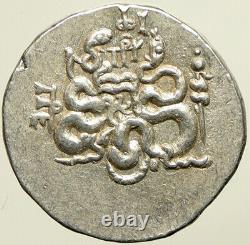 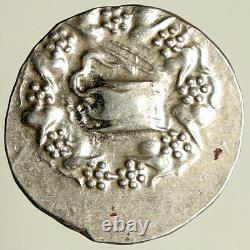 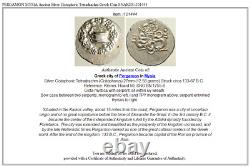 Item: i101444 Authentic Ancient Coin of. Silver Cistophoric Tetradrachm (Cistophorus) 27mm (12.58 grams) Struck circa 133-67 B. Reference: Kleiner, Hoard 50; SNG BN 1755-6 Cista mystica with serpent; all within ivy wreath. Bow case between two serpents; monogram to left, FI and TPY monogram above, serpent-entwined thyrsos to right. Situated in the Kaikos valley, about 15 miles from the coast, Pergamon was a city of uncertain origin and of no great importance before the time of Alexander the Great.

In the 3rd century B. It became the center of the independent kingdom ruled by the Attalid dynasty founded by Philetairos.

The city was extended and beautified as the prosperity of the kingdom increased, and by the late Hellenistic times Pergamon ranked as one of the great cultural centers of the Greek world. After the end of the kingdom, 133 B. Pergamon became capital of the Roman province of Asia.

A Dionysiac ivy wreath surrounds the cista mystica or "mystic basket", which held the sacred serpent carried by young girls of high rank at public festivals and feasts in celebration of the mystic rites of Dionysos, a divinity particularly honoured by the kings of Pergamon. The reverse quiver was a symbol of Herakles.

The serpents were symbols of the king because of their power, of time because of their length, and of rebirth or renewal, because of the shedding of their skins. Serpents played a central part in the mysteries of Dionysos in their role as protectors of the vine (by eating mice and other consumers of grapes). Owing to a reputation of never becoming ill, serpents were also symbols of health, as seen on the staff Asklepios. Due to their stealthy habit they were seen as the guardians of treasure, such as the quiver of Herakles.

All of these qualities made serpents especially close to the heart of Eumenes. Cistophoric tetradrachms ('basket bearers') were struck on the theoretical weight standard of about 12.6 gm.

Slightly below the new Rhodian tetradrachm and approximately an Attic tridrachm (three-fourths of an Attic tetradrachm). The new royal coinage was imposed by Eumenes II on his subject cities with the intention of creating a closed economic area under central control some time after the treaty of Apameia in 188, possibly about 175 BC, and bear mintmarks and magistrates' symbols which are merely subordinate to a federal coinage for the whole kingdom. Die linkage among the various issues may point to Pergamon as the central mint of issue or the producer of dies for distribution to the many federated cities which include: Ephesos, Tralles, Sardes, Sunnada, Apameia, Laodikeia, Thyateira, Apollonis and Stratonikeia. Eumenes II created a rich kingdom in western Asia Minor with its capital at Pergamon and became the guarantor of stability in the Roman interest.

After the defeat of the Galatians in 184 the grateful Greeks called him Soter or'Saviour' and extended the temple of Athena Nikephoros, commemorated on Attic weight tetradrachms until about 175, and made her festival pan-Hellenic. In the 170s BC Eumenes transformed Pergamon, from which our modern word'parchment' derives, into one of the finest cities in the Greek world.

This Hellenistic cultural capital produced -- with the assistance of massive gifts from Athens, Miletos, Delphi and Kos -- royal libraries second only to Alexandria and a school of Pergamene plastic art characterised by great realism and twisted bodies, the apogee of which is the Great Altar of Zeus, now the centrepiece of the Pergamon Museum in Berlin. On the north frieze of the Great Altar a goddess'Nyx' can be seen holding a'snake-pot' similar to our cista mystica. Attalos II Philadelphos succeeded his brother Eumenes in 158 BC, married his widow Stratonike, accepted Roman paramountcy and continued Eumenes' building programme at Pergamon and the tradition of magnificent gifts to Greek cities and shrines such as the Stoa of Attalus at Athens. In 138 BC Attalos III, Philomater, succeeded to his father's throne, and being childless on his death in 133, bequeathed the kingdom to Rome. After Pergamon lost its independence in 133 BC, cistophori, now the equivalent of three denarii, continued to be issued by the Roman governors of Asia Minor including the reluctant Cicero, Mark Antony, Octavian and his successor emperors down to the reign of Hadrian.

Pergamon was a rich and powerful ancient Greek city in Aeolis. It is located 26 kilometres (16 mi) from the modern coastline of the Aegean Sea on a promontory on the north side of the river Caicus (modern-day Bakirçay) and northwest of the modern city of Bergama. Many remains of its impressive monuments can still be seen and especially the outstanding masterpiece of the Pergamon Altar. It became the capital of the Kingdom of Pergamon during the Hellenistic period under the Attalid dynasty in 281-133 BC.

Pergamon is cited in the Book of Revelation as one of the seven churches of Asia. Xenophon provides the earliest surviving documentary mention of Pergamon. Captured by Xenophon in 399 BC and immediately recaptured by the Persians, it was severely punished in 362 BC after a revolt. It did not become important until Lysimachus, King of Thrace, took possession in 301 BC, but soon after his lieutenant Philetaerus enlarged the town, the kingdom of Thrace collapsed and it became the capital of the new kingdom of Pergamon which Philetaerus founded in 281 BC, beginning the Attalid dynasty. In 261 BC he bequeathed his possessions to his nephew Eumenes I (263-241 BC), who increased them greatly, leaving as heir his cousin Attalus I (241-197 BC). The Attalids became some of the most loyal supporters of Rome in the Hellenistic world. Under Attalus I (241-197 BC), they allied with Rome against Philip V of Macedon, during the first and second Macedonian Wars, and again under Eumenes II (197-158 BC), against Perseus of Macedon, during the Third Macedonian War. For their support against the Seleucids, the Attalids were rewarded with all the former Seleucid domains in Asia Minor.

As a consequence of its rise to power, the city expanded greatly. Until 188 BC, it had not grown significantly since its founding by Philetaerus, and covered c. After this year, a massive new city wall was constructed, 4 kilometres (2.5 mi) long and enclosing an area of approximately 90 hectares (220 acres).

The Attalids ruled with intelligence and generosity. They allowed the Greek cities in their domains to maintain nominal independence. They sent gifts to Greek cultural sites like Delphi, Delos, and Athens. They defeated the invading Celts. They remodeled the Acropolis of Pergamon after the Acropolis in Athens.

Aristonicus, who claimed to be Attalus' brother as well as the son of Eumenes II, an earlier king, led a revolt among the lower classes with the help of Blossius, a famous Stoic philosopher. Aristonicus took the regal name Eumenes III.

For a period he enjoyed success, defeating and killing the Roman consul P. Licinius Crassus and his army. However, his revolt was put down in 129 BC by the consul M. Perperna, and Aristonicus was executed in Rome. After this, Pergamon was divided by Perperna's successor, M'. Aquillius, among Rome, Pontus, and Cappadocia. Pergamon was briefly the capital of the Roman province of Asia, before the capital was transferred to Ephesus. After a slow decline, the city was favored by several imperial initiatives under Hadrian (117 - 138). It was granted the title of metropolis and as a result of this an ambitious building program was carried out: massive temples, a stadium, a theatre, a huge forum and an amphitheatre were constructed. In addition, at the city limits the shrine to Asclepius (the god of healing) was expanded into a lavish spa. This sanctuary grew in fame and was considered one of the most famous therapeutic and healing centers of the Roman world. Galen, after Hippocrates the most famous physician of antiquity, was born at Pergamon and received his early training at the Asclepeion. Pergamon reached the height of its greatness under Roman Imperial rule and was home to about 200,000 inhabitants. The city was an early seat of Christianity and was granted a bishopric by the 2nd century. The city suffered badly during the third century and was badly damaged by an earthquake in 262 and was sacked by the Goths shortly after. The Library of Pergamon was renowned, and second only to the Library of Alexandria, although not approaching Alexandria in scholarship. World-renowned expert numismatist, enthusiast, author and dealer in authentic ancient Greek, ancient Roman, ancient Byzantine, world coins & more. Ilya Zlobin is an independent individual who has a passion for coin collecting, research and understanding the importance of the historical context and significance all coins and objects represent. Send me a message about this and I can update your invoice should you want this method. Getting your order to you, quickly and securely is a top priority and is taken seriously here. Great care is taken in packaging and mailing every item securely and quickly. What is a certificate of authenticity and what guarantees do you give that the item is authentic?

How and where do I learn more about collecting ancient coins? Visit the "Guide on How to Use My Store". For on an overview about using my store, with additional information and links to all other parts of my store which may include educational information on topics you are looking for. This item is in the category "Coins & Paper Money\Coins: Ancient\Greek (450 BC-100 AD)".