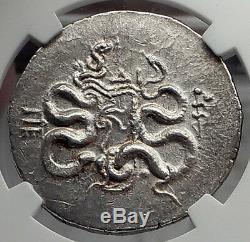 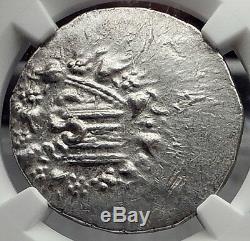 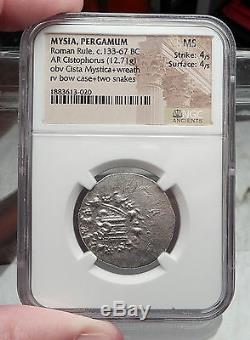 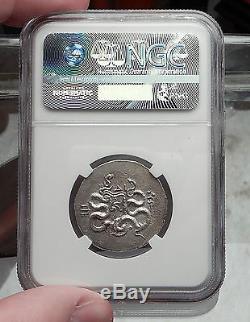 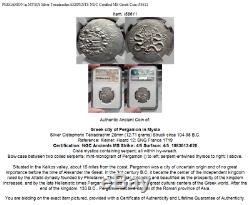 Greek city of Pergamon in Mysia Silver Cistophoric Tetradrachm 26mm (12.71 grams) Struck circa 104-98 B. Reference: Kleiner, Hoard 12; SNG France 1719 Certification: NGC Ancients MS Strike: 4/5 Surface: 4/5 1883613-020 Cista mystica containing serpent; all within ivy-wreath. Bow-case between two coiled serpents; mint-monogram of Pergamon to left; serpent-entwined thyrsos to right; I above. Situated in the Kaikos valley, about 15 miles from the coast, Pergamon was a city of uncertain origin and of no great importance before the time of Alexander the Great. In the 3rd century B. It became the center of the independent kingdom ruled by the Attalid dynasty founded by Philetairos. The city was extended and beautified as the prosperity of the kingdom increased, and by the late Hellenistic times Pergamon ranked as one of the great cultural centers of the Greek world. After the end of the kingdom, 133 B.

Pergamon became capital of the Roman province of Asia. A cista (kiste) in the classical world was generally a casket, used for example to hold unguents or jewels. More specifically, in the Mystery cult, a cista mystica (literally "sacred chest") is a basket or chest used to house snakes. Cistae mystica were used in the initiation ceremony of the cult of Bacchus or Dionysus, as well as an early gnostic sect called the Ophites. Cistae mysticae appear on ancient Roman and Greek coins.

Furthermore small Cistas were worked in Etruria, contained in cylindrical bronze containers for domestic use and storage of toiletries. Their faces were usually adorned engraved with figures, soldered on the top small bronze figures. The Cista could be realized with different materials like wicker, wood, rawhide, but above of all in metal, used from the 5th century. The Etruscans manufactured it in different qualities from the 5th century, at first in ovoid form with thrown scenes, and then in cylindrical form with engraved scenes.

The handle of the lid consisted of little structures. One of the most important city of production of Cista is Preneste, an old city of Lazio, which realised different types of Cista from the 4th century. A thyrsus or thyrsos was a wand or staff of giant fennel (Ferula communis) covered with ivy vines and leaves, sometimes wound with taeniae and always topped with a pine cone. The thyrsus, associated with Dionysus (or Bacchus) and his followers, the Satyrs and Maenads, is a symbol of prosperity, fertility, hedonism, and pleasure/enjoyment in general. It has been suggested that this was specifically a fertility phallus, with the fennel representing the shaft of the penis and the pine cone representing the "seed" issuing forth. The thyrsus was tossed in the Bacchic dance. Pentheus : The thyrsus- in my right hand shall I hold it? Dionysus : In thy right hand, and with thy right foot raise it.

Sometimes the thyrsus was displayed in conjunction with a kantharos wine cup, another symbol of Dionysus, forming a male-and-female combination like that of the royal scepter and orb. In Greek religion, the staff was carried by the votaries of Dionysus. Euripides wrote that honey dripped from the thyrsos staves that the Bacchic maenads carried. The thyrsus was a sacred instrument at religious rituals and fêtes. The fabulous history of Bacchus relates that he converted the thyrsi carried by himself and his followers into dangerous weapons, by concealing an iron point in the head of leaves.

Hence his thyrsus is called "a spear enveloped in vine-leaves", and its point was thought to incite to madness. In the Iliad , Diomedes, one of the leading warriors of the Achaeans, mentions the thyrsus while speaking to Glaucus, one of the Lycian commanders in the Trojan army, about Lycurgus, the king of Scyros.

He it was that/drove the nursing women who were in charge/of frenzied Bacchus through the land of Nysa, /and they flung their thyrsi on the ground as/murderous Lycurgus beat them with his ox-/goad. The thyrsus is explicitly attributed to Dionysus in Euripides's play The Bacchae as part of the costume of the Dionysian cult.

To raise my Bacchic shout, and clothe all who respond/ In fawnskin habits, and put my thyrsus in their hands-/ The weapon wreathed with ivy-shoots... " Euripides also writes, "There's a brute wildness in the fennel-wands-Reverence it well. The Bacchae and Other Plays , trans. By Philip Vellacott, Penguin, 1954. I conceive that the founders of the mysteries had a real meaning and were not mere triflers when they intimated in a figure long ago that he who passes unsanctified and uninitiated into the world below will live in a slough, but that he who arrives there after initiation and purification will dwell with the gods.

For "many, " as they say in the mysteries, "are the thyrsus bearers, but few are the mystics, "--meaning, as I interpret the words, the true philosophers. In Part II of Johann Wolfgang von Goethe's Faust , Mephistopheles tries to catch a Lamia, only to find out that she is an illusion. Well, then, a tall one I will catch... /And now a thyrsus -pole I snatch! /Only a pine-cone as its head.

Robert Browning mentions the thyrsus in passing in The Bishop Orders His Tomb at St Praxed's Church , as the dying bishop confuses Christian piety with classical extravagance. The bas-relief in bronze ye promised me, /Those Pans and nymphs ye wot of, and perchance/Some tripod, thrysus , with a vase or so, (56-58). Pergamon , Pergamum or Pérgamo (in Greek,) was an ancient Greek city in modern-day Turkey, in Mysia, today located 16 miles (26 km) from the Aegean Sea on a promontory on the north side of the river Caicus (modern day Bakrçay), that became the capital of the Kingdom of Pergamon during the Hellenistic period, under the Attalid dynasty, 281-133 BC. Today, the main sites of ancient Pergamon are to the north and west of the modern city of Bergama. The Kingdom of Pergamon (colored olive), shown at its greatest extent in 188 BC. The Attalid kingdom was the rump state left after the collapse of the Kingdom of Thrace. The Attalids, the descendants of Attalus, father of Philetaerus who came to power in 281 BC following the collapse of the Kingdom of Thrace, were among the most loyal supporters of Rome in the Hellenistic world. Under Attalus I (241-197 BC), they allied with Rome against Philip V of Macedon, during the first and second Macedonian Wars, and again under Eumenes II (197-158 BC), against Perseus of Macedon, during the Third Macedonian War. For support against the Seleucids, the Attalids were rewarded with all the former Seleucid domains in Asia Minor.

The Attalids ruled with intelligence and generosity. They allowed the Greek cities in their domains to maintain nominal independence. They sent gifts to Greek cultural sites like Delphi, Delos, and Athens.

They defeated the invading Celts. They remodeled the Acropolis of Pergamo after the Acropolis in Athens. When Attalus III (138-133 BC) died without an heir in 133 BC he bequeathed the whole of Pergamon to Rome, in order to prevent a civil war.

The base of this altar remains on the upper part of the Acropolis. It was perhaps to this altar, believed dedicated to Zeus, that John of Patmos referred to as "Satan's Throne" in his Book of Revelation (Revelation 2:12-13). Other notable structures still in existence on the upper part of the Acropolis include. The Hellenistic Theater with a seating capacity of 10,000. This had the steepest seating of any known theater in the ancient world. The Sanctuary of Trajan (also known as the Trajaneum). The Heroön - a shrine where the kings of Pergamon, particularly, Attalus I and Eumenes II, were worshipped. Pergamon's library on the Acropolis (the ancient Library of Pergamum) is the second best in the ancient Greek civilization.

When the Ptolemies stopped exporting papyrus, partly because of competitors and partly because of shortages, the Pergamenes invented a new substance to use in codices, called pergaminus or pergamena (parchment) after the city. This was made of fine calfskin, a predecessor of vellum. The library at Pergamom was believed to contain 200,000 volumes, which Mark Antony later gave to Cleopatra as a wedding present.

The lower part of the Acropolis has the following structures. Three kilometers south of the Acropolis, down in the valley, there was the Sanctuary of Asclepius (also known as the Asclepieion), the god of healing. In this place people with health problems could bathe in the water of the sacred spring, and in the patients' dreams Asclepius would appear in a vision to tell them how to cure their illness. Archeology has found lots of gifts and dedications that people would make afterwards, such as small terracotta body parts, no doubt representing what had been healed. Notable extant structures in the Asclepieion include.

A circular treatment center (sometimes known as the Temple of Telesphorus). The Via Tecta (or the Sacred Way, which is a colonnaded street leading to the sanctuary) and. Pergamon's other notable structure is the Serapis Temple (Serapeum) which was later transformed into the Red Basilica complex (or Kizil Avlu in Turkish), about one kilometer south of the Acropolis. It consists of a main building and two round towers. In the first century AD, the Christian Church at Pergamon inside the main building of the Red Basilica was one of the Seven Churches to which the Book of Revelation was addressed (Revelation 2:12).

Ilya Zlobin is an independent individual who has a passion for coin collecting, research and understanding the importance of the historical context and significance all coins and objects represent. Send me a message about this and I can update your invoice should you want this method. Getting your order to you, quickly and securely is a top priority and is taken seriously here.

Whether your goal is to collect or give the item as a gift, coins presented like this could be more prized and valued higher than items that were not given such care and attention to. Is there a number I can call you with questions about my order? When should I leave feedback? Please don't leave any negative feedbacks, as it happens sometimes that people rush to leave feedback before letting sufficient time for their order to arrive. The matter of fact is that any issues can be resolved, as reputation is most important to me. My goal is to provide superior products and quality of service. How and where do I learn more about collecting ancient coins? Visit the "Guide on How to Use My Store" for on an overview about using my store, with additional information and links to all other parts of my store which may include educational information on topics you are looking for. You may also want to do a YouTube search for the term "ancient coin collecting" for educational videos on this topic. The item "PERGAMON in MYSIA Silver Tetradrachm SERPENTS NGC Certified MS Greek Coin i58611" is in sale since Sunday, June 11, 2017.