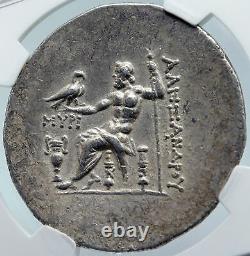 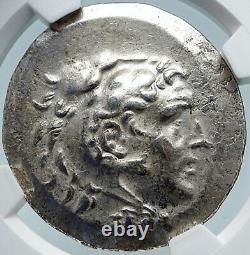 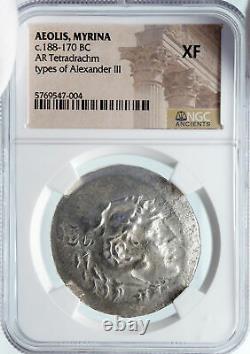 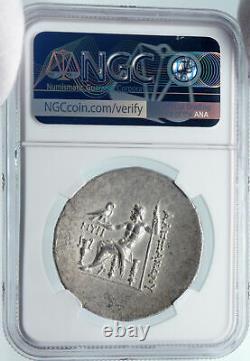 Item: i85485 Authentic Ancient Coin of. Posthumous issue in the name and types of Alexander III the Great of Macedon Silver Tetradrachm 37mm 1h Struck circa 188-170 B.

Numismatic Note: Alexander the Great coin types were used as standard for trade in the ancient Greek world, and were issued for hundreds of years after his death in various Greek cities. Situated north-east of Kyme, Myrina was overshadowed by its powerful neighbor, though it appears to have been a place of some importance in Hellenistic times. Best known as Alexander the Great , he was a king (basileus in Greek) of the Ancient Greek kingdom of Macedonia. He was born in the city of Pella in 356 BC. By age 20, Alexander succeeded his father Philip II to the throne as king.

He spent most of his years as king in an unprecedented military campaign of conquest through Asia, northeast Africa and even reached India. By age 30 he created one of the biggest empires in the ancient world, reaching from Greece to northwestern India. Being undefeated in battle, many consider him as one of history's most successful military commanders. He could be considered one of history's most important figures, having spread the Greek civilization far and wide, and was even admired by Julius Caesar along with many other important historical personages as well.

During his youth, Alexander was tutored by the philosopher Aristotle until the age of 16. After Philip's assassination in 336 BC, Alexander succeeded his father to the throne and inherited a strong kingdom and an experienced army. Alexander was awarded the generalship of Greece and used this authority to launch his father's Panhellenic project to lead the Greeks in the conquest of Persia.

At that point, his empire stretched from the Adriatic Sea to the Indus River. Seeking to reach the "ends of the world and the Great Outer Sea", he invaded India in 326 BC, but eventually turned back at the demand of his homesick troops. Alexander died in Babylon in 323 BC, the city he planned to establish as his capital, without executing a series of planned campaigns that would have begun with an invasion of Arabia. In the years following his death, a series of civil wars tore his empire apart, resulting in several states ruled by the Diadochi, Alexander's surviving generals and heirs.

Alexander's legacy includes the cultural diffusion his conquests engendered, such as Greco-Buddhism. He founded some twenty cities that bore his name, most notably Alexandria in Egypt. Alexander's settlement of Greek colonists and the resulting spread of Greek culture in the east resulted in a new Hellenistic civilization, aspects of which were still evident in the traditions of the Byzantine Empire in the mid-15th century and the presence of Greek speakers in central and far eastern Anatolia until the 1920s.

He is often ranked among the most influential people in human history, along with his teacher Aristotle. Myrina (Greek:), was one of the Aeolian cities on the western coast of Mysia, about 40 stadia to the southwest of Gryneium. Its site is believed to be occupied by the modern Sandarlik at the mouth of the Koca Çay. It is said to have been founded by one Myrinus before the other Aeolian cities, or by the Amazon Myrina.

Artaxerxes gave Gryneium and Myrina to Gongylus, an Eretrian, who had been banished from his native city for favoring the interests of Persia. Myrina was a very strong place, though not very large, and had a good harbor.

Pliny mentions that it bore the surname of Sebastopolis ; while, according to Syncellus, it was also called Smyrna. For some time Myrina was occupied by Philip of Macedon; but the Romans compelled him to evacuate it, and declared the place free. The town was restored each time, and continued to exist until a late period. Myrina minted coins in antiquity, some of which survive. Aeolis or Aeolia was an area that comprised the west and northwestern region of Asia Minor, mostly along the coast, and also several offshore islands (particularly Lesbos), where the Aeolian Greek city-states were located.

Aeolis incorporated the southern parts of Mysia which bounded it to the north, Ionia to the south, and Lydia to the east. Aeolis was an ancient district on the western coast of Asia Minor.

It extended along the Aegean Sea from the entrance of the Hellespont (now the Dardanelles) south to the Hermus River (now the Gediz River). It was named for the Aeolians, some of whom migrated there from Greece before 1000 BC. Aeolis was, however, an ethnological and linguistic enclave rather than a geographical unit.

The district often was considered part of the larger northwest region of Mysia. According to Homer's description, Odysseus, after his stay with the Cyclopes, reached the island of Aeolia, who provided him with the west wind Zephyr. In early times, by the 8th century BC, the Aeolians' twelve most important cities were independent, and formed a league (Dodecapolis): Cyme, Larissa (also called Phriconis), Neonteichos, Temnus, Cilla, Notion, Aegiroessa, Pitane, Aegae, Myrina, Gryneion, and Smyrna.

The most celebrated of the cities was Smyrna (modern Izmir, Turkey), but in 699 BC, Smyrna became part of an Ionian confederacy. The remaining cities were conquered by Croesus, king of Lydia (reigned 560-546 BC). Later they were held successively by the Persians, Macedonians, Seleucids, and Pergamenes. Attalus III, the last king of Pergamum, bequeathed Aeolis to Rome in 133 BC.

Shortly afterward, it was made part of the Roman province of Asia. At the partition of the Roman Empire (395 AD), Aeolis was assigned to the East Roman (Byzantine) empire and remained under Byzantine rule until the early 15th century, when the Ottoman Turks occupied the area. World-renowned expert numismatist, enthusiast, author and dealer in authentic ancient Greek, ancient Roman, ancient Byzantine, world coins & more. Ilya Zlobin is an independent individual who has a passion for coin collecting, research and understanding the importance of the historical context and significance all coins and objects represent.

Please don't leave any negative feedbacks, as it happens sometimes that people rush to leave feedback before letting sufficient time for their order to arrive. The matter of fact is that any issues can be resolved, as reputation is most important to me. My goal is to provide superior products and quality of service. How and where do I learn more about collecting ancient coins? Visit the Guide on How to Use My Store.

For on an overview about using my store, with additional information and links to all other parts of my store which may include educational information on topics you are looking for. The item "MYRINA in AEOLIS Ancient Silver Greek TETRADRACHM Coin ALEXANDER III NGC i85484" is in sale since Wednesday, August 5, 2020.