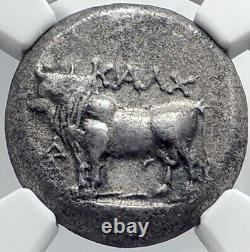 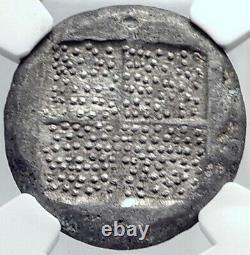 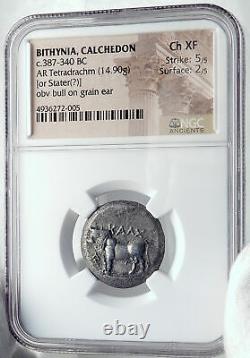 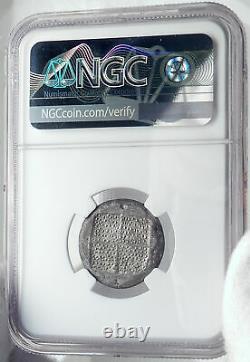 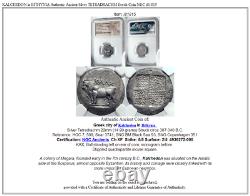 Kalchedon was situated on the Asiatic side of the Bosporus, almost opposite Byzantion. Its history and coinage were closely linked with its more important Euboean neighbor. Chalcedon was an ancient maritime town of Bithynia, in Asia Minor, almost directly opposite Byzantium, south of Scutari (modern Üsküdar). It is now a district of the city of Istanbul named Kadköy. The name is a variant of Calchedon , found on all the coins of Chalcedon as well as in manuscripts of Herodotus's Histories , Xenophon's Hellenica , Arrian's Anabasis , and other works.

Almost no aboveground vestiges of the ancient city survive in Kadköy today; artifacts uncovered at Altyol and other excavation sites are on display at the Istanbul Archaeological Museum. The site of Chalcedon is located on a small peninsula on the north coast of the Sea of Marmara, near the mouth of the Bosphorus. A stream, called the Chalcis or Chalcedon in antiquity and now known as the Kurbaaldere (Turkish: stream with frogs), flows into Fenerbahçe bay. There Greek colonists from Megara in Attica founded the settlement of Chalcedon in 685 BC, some seventeen years before Byzantium.

The Greek name of the ancient town is from its Phoenician name, meaning "New Town", as is the name of Carthage. Phoenicians were active traders in this area. Pliny states that Chalcedon was first named Procerastis, a name which may be derived from a point of land near it: then it was named Colpusa, from the form of the harbour probably; and finally Caecorum Oppidum, or the town of the blind. It was a Megarian colony founded on a site that was viewed at the time as so obviously inferior to that which was within view on the opposite shore (these being the small Lygos and Semistra settlements on Seraglio point), that the Persian general Megabazus is said to have remarked that Chalcedon's founders must have been blind. Indeed, Strabo and Pliny relate that the oracle of Apollo had told the Athenians and Megarians who founded Byzantium to build their city opposite to the blind, and that the story was interpreted to mean Chalcedon, the'City of the Blind'.

Chalcedon, however, was a flourishing town in which trade thrived. It contained many temples, including one of Apollo, which had an oracle.

Chalcedonia, the territory dependent upon Chalcedon, stretched up the Anatolian bank of the Bosphorus at least as far as the temple of Zeus Urius, now the site of Yoros Castle, and may have included the north bank of the Bay of Astacus which extends towards Nicomedia. Important villages in Chalcedonia included Chrysopolis. (the modern Üsküdar) and Panteicheion (Pendik). Strabo notes that "a little above the sea" in Chalcedonia, there lies the fountain Azaritia, which contains small crocodiles.

In its early history it shared the fortunes of Byzantium, was taken by the satrap Otanes, vacillated long between the Lacedaemonian and the Athenian interests. Darius' bridge of boats, built in 512 BC for the Scythian campaign, extended from Chalcedonia to Thrace. Chalcedon was included within the kingdom of Bithynia, whose king Nicomedes willed Bithynia to the Romans upon his death in 74 BC. The city was partly destroyed by Mithridates. The governor of Bithynia, Cotta, had fled to Chalcedon for safety along with thousands of other Romans.

Three thousand of them were killed, sixty ships captured, and four ships destroyed in Mithridates' assault on the city. During the Empire, Chalcedon recovered, and was given the status of a free city. It fell under the repeated attacks of the barbarian hordes who crossed over after having ravaged Byzantium, including some referred to as Scythians who attacked during the reign of Valerian and Gallienus in the mid 3rd century. Chalcedon suffered somewhat from its proximity to the new imperial capital at Constantinople.

First the Byzantines and later the Ottoman Turks used it as a quarry for building materials for Constantinople's monumental structures Chalcedon also fell repeatedly to armies attacking Constantinople from the east. In 361 AD it was the location of the Chalcedon tribunal, where Julian the apostate brought his enemies to trial. In 451 AD an ecumenical council of Christian leaders convened here. The Council of Chalcedon defined the human and divine natures of Jesus and provoked the schism with the churches composing Oriental Orthodoxy.

The general Belisarius may have spent his years of retirement on his estate of Rufinianae in Chalcedonia. Beginning in 616 and for at least a decade thereafter, Chalcedon furnished an encampment to the Persians under Chosroes II. It later fell for a time to the Arabs under Yazid cf. Chalcedon was badly damaged during the Fourth Crusade (1204).

It came definitively under Ottoman rule under Orhan Gazi a century before the Ottoman conquest of Constantinople. Chalcedon was an episcopal see at an early date. Several Christian martyrs are associated with Chalcedon. Euphemia and her companions in the early fourth century; the cathedral of Chalcedon was consecrated to her.

Sabel the Persian and his companions. The Fourth Ecumenical Council, known as the Council of Chalcedon, was convened in 451. After the council, Chalcedon became a metropolitan see, but without suffragans. There is a list of its bishops in Le Quien.

Completed by Anthimus Alexoudes, revised for the early period by Pargoire. Cosmas and Nicetas, during the Iconoclastic period. Heraclianus, who wrote against the Manichæans and the Monophysites. Leo, persecuted by Alexius Comnenus.

The Orthodox Metropolitan of Chalcedon holds senior rank (currently third position) within the Greek Orthodox patriarchal synod of Constantinople. The incumbent is Metropolitan Athanasios Papas. The cathedral is that of St. After the Great Schism, Latin church retained Chalcedon as a titular see, suffragan of Nicomedia. Mentions eight Latin bishops, from 1345 to 1443; Eubel. Has ten names, from 1293 to 1525. Five other titular bishops of the sixteenth century are mentioned in the Revue bénédictine. The titular see of Chalcedon was officially given to the Roman Catholic Bishop of England and Wales after 1623. The first two such bishops were William Bishop (1623-24) and Richard Smith (1624-32). The last appointment to this Latin titular see dates to 1967. The Armenian Catholic titular see has been suppressed. Its last occupant as also that of the Syrian Catholic titular see dates to the 1950s. Boethus (2nd century BC), Greek sculptor.

Getting your order to you, quickly and securely is a top priority and is taken seriously here. Great care is taken in packaging and mailing every item securely and quickly. What is a certificate of authenticity and what guarantees do you give that the item is authentic?

You will be very happy with what you get with the COA; a professional presentation of the coin, with all of the relevant information and a picture of the coin you saw in the listing. Additionally, the coin is inside it's own protective coin flip (holder), with a 2x2 inch description of the coin matching the individual number on the COA. Whether your goal is to collect or give the item as a gift, coins presented like this could be more prized and valued higher than items that were not given such care and attention to. When should I leave feedback? Please don't leave any negative feedbacks, as it happens sometimes that people rush to leave feedback before letting sufficient time for their order to arrive. The matter of fact is that any issues can be resolved, as reputation is most important to me. My goal is to provide superior products and quality of service. How and where do I learn more about collecting ancient coins?

Visit the Guide on How to Use My Store. For on an overview about using my store, with additional information and links to all other parts of my store which may include educational information on topics you are looking for.

The item "KALCHEDON in BITHYNIA Authentic Ancient Silver TETRADRACHM Greek Coin NGC i81815" is in sale since Monday, December 2, 2019. This item is in the category "Coins & Paper Money\Coins\ Ancient\Greek (450 BC-100 AD)". The seller is "highrating_lowprice" and is located in Rego Park, New York. This item can be shipped worldwide.