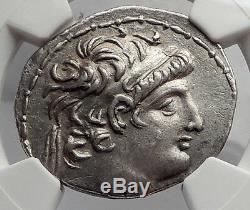 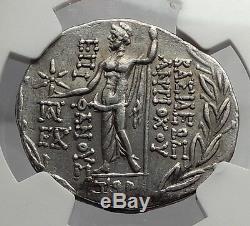 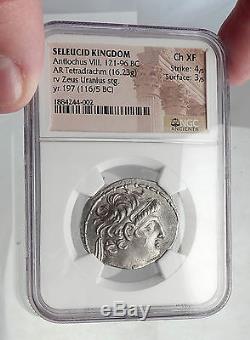 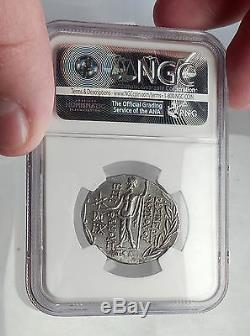 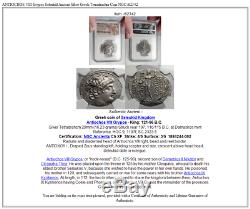 125-96, second son of Demetrios II Nikator. He was placed upon the throne in 125 by his mother Cleopatra, who put to death his eldest brother Seleukos V, because she wished to have the power in her own hands.

He poisoned his mother in 120, and subsequently carried on war for some years with his brother Antiochos IX Kyzikenos. At length, in 112, the two brothers agreed to share the kingdom between them, Antiochos IX Kyzikenos having Coele and Phoenicia, and Antiochos VIII Grypos the remainder of the provinces. Grypos was assassinated in 96. In the ancient Greek religion, Zeus was the "Father of Gods and men". Who ruled the Olympians of Mount Olympus as a father ruled the family. He was the god of sky and thunder in Greek mythology. His Roman counterpart is Jupiter and Etruscan counterpart is Tinia. Zeus was the child of Cronus and Rhea, and the youngest of his siblings. In most traditions he was married to Hera, although, at the oracle of Dodona, his consort was Dione: according to the Iliad , he is the father of Aphrodite by Dione. He is known for his erotic escapades. These resulted in many godly and heroic offspring, including Athena, Apollo and Artemis, Hermes, Persephone (by Demeter), Dionysus, Perseus, Heracles, Helen of Troy, Minos, and the Muses (by Mnemosyne); by Hera, he is usually said to have fathered Ares, Hebe and Hephaestus. As Walter Burkert points out in his book, Greek Religion , Even the gods who are not his natural children address him as Father, and all the gods rise in his presence. For the Greeks, he was the King of the Gods, who oversaw the universe. As Pausanias observed, "That Zeus is king in heaven is a saying common to all men". In Hesiod's Theogony Zeus assigns the various gods their roles. In the Homeric Hymns he is referred to as the chieftain of the gods. His symbols are the thunderbolt, eagle, bull, and oak.

In addition to his Indo-European inheritance, the classical "cloud-gatherer" also derives certain iconographic traits from the cultures of the Ancient Near East, such as the scepter. Zeus is frequently depicted by Greek artists in one of two poses: standing, striding forward, with a thunderbolt leveled in his raised right hand, or seated in majesty. Antiochus VIII Epiphanes/Callinicus/Philometor , nicknamed Grypus (hook-nose), was crowned as ruler of the Greek Seleucid kingdom in 125 BC. He was the son of Demetrius II Nicator and Cleopatra Thea. Antiochus Grypus was crowned as a teenager in 125 BC after his mother Cleopatra Thea had killed his elder brother Seleucus V Philometor, ruling jointly with her.

After Antiochus defeated usurper Alexander II Zabinas in 123 BC his mother tried to poison him with wine, but the suspicious king forced her to drink the cup herself. (The story may have been inspired by the fact that Grypus was interested in toxicology; some poems about poisonous herbs believed to have been written by him are quoted by the famous physician Galen).

The child Antiochus Epiphanes, who is known from coins, was deposed-but not killed-when Demetrius II was restored in 129 BC. Despite political shortcomings, Grypus was a popular king. His ugly, lazy appearance on coins (common among the last Seleucids), together with stories of his lavish banquets, made posterity believe his dynasty was degenerated and decadent. This was however a conscious image, an invocation of the Hellenistic idea Tryphe - meaning good life, which the last Seleucids strove to be associated with, as opposed to the exhausting civil wars and feuds which troubled their reigns in reality. A story of his luxurious parties claims he sent food home with guests who attended banquets, complete with a camel as beast of burden, as well as a with attendant to carry the guest himself.

This should certainly have caused some strain on the already depleted treasury. Cyzicenus' wife, also named Cleopatra, was a sister of Tryphaena and was eventually killed in a dramatic fashion in the temple of Daphne outside Antioch, on the order of Tryphaena. Cyzicenus eventually killed Tryphaena as revenge. The two brothers then divided the Seleukid Kingdom between them until Grypus was killed by his minister Heracleon in 96 BC. Five of Grypus' sons later rose to kingship. This contributed to the confusion of civil war amid which the Seleucid empire ended. He also had at least one daughter.

Laodice VII Thea, married to king Mithridates I Callinicus of Commagene as part of a settlement by Mithridates' father Sames II Theosebes Dikaios to ensure peace between the Kingdom of Commagene and the Seleucid Empire. Laodice and Mithridates' son was king Antiochus I Theos of Commagene. This was a grandson to Grypus.

The Seleucid Empire was a Hellenistic state ruled by the Seleucid dynasty founded by Seleucus I Nicator following the division of the empire created by Alexander the Great. Seleucus received Babylonia and, from there, expanded his dominions to include much of Alexander's near eastern territories. The Greek population of the cities who formed the dominant elite were reinforced by emigration from Greece. Seleucid expansion into Anatolia and Greece was abruptly halted after decisive defeats at the hands of the Roman army. Their attempts to defeat their old enemy Ptolemaic Egypt were frustrated by Roman demands.

Much of the eastern part of the empire was conquered by the Parthians under Mithridates I of Parthia in the mid-2nd century BC, yet the Seleucid kings continued to rule a rump state from the Seleukid Kingdom until the invasion by Armenian king Tigranes the Great and their ultimate overthrow by the Roman general Pompey. World-renowned expert numismatist, enthusiast, author and dealer in authentic ancient Greek, ancient Roman, ancient Byzantine, world coins & more. Ilya Zlobin is an independent individual who has a passion for coin collecting, research and understanding the importance of the historical context and significance all coins and objects represent. Send me a message about this and I can update your invoice should you want this method. Getting your order to you, quickly and securely is a top priority and is taken seriously here. Great care is taken in packaging and mailing every item securely and quickly. What is a certificate of authenticity and what guarantees do you give that the item is authentic?

For on an overview about using my store, with additional information and links to all other parts of my store which may include educational information on topics you are looking for. The item "ANTIOCHOS VIII Grypos Seleukid Ancient Silver Greek Tetradrachm Coin NGC i62342" is in sale since Friday, June 30, 2017. This item is in the category "Coins & Paper Money\Coins\ Ancient\Greek (450 BC-100 AD)". The seller is "highrating_lowprice" and is located in Rego Park, New York.