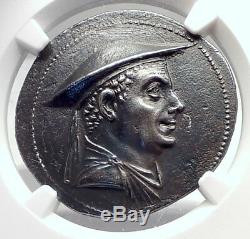 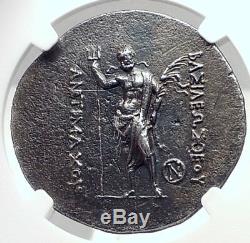 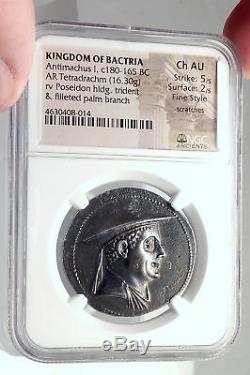 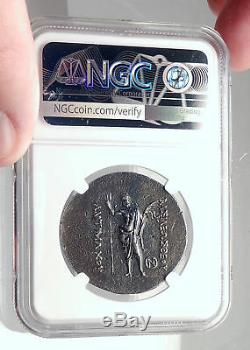 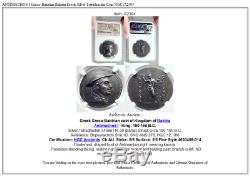 Greek Greco-Baktrian coin of Kingdom of Baktria. Silver Tetradrachm 34mm (16.30 grams) Struck circa 180-165 B. SNG ANS 276; HGC 12, 106 Certification: NGC Ancients. Ch AU Strike: 5/5 Surface: 2/5 Fine Style 4630408-014 Diademed, draped bust of Antimachus right, wearing kausia. Poseidon standing facing, resting right hand on trident and holding palm branch in left, NO monogram low in inner right field. Anthimachus I Theos (known as Antimakha in Indian sources) was one of the Greco-Bactrian kings, generally dated from around 180 BC to 170 B. William Woodthorpe Tarn and numismatist Robert Senior place Antimachus as a member of the Euthydemid dynasty and probably as a son of Euthydemus and brother of Demetrius. Narain, mark him as independent of Euthydemid authority, and probably a scion of some relation to the Diodotid dynasty.

He was king of an area covering parts of Bactria and probably also Arachosia in southern Afghanistan (see "Coins of Antimachus I, " below). Antimachus I was either defeated during his resistance to the usurper Eucratides, or his main territory was absorbed by the latter upon his death. In the reign of Antimachos Theos and Eumenes and Antimachos...

The fourth year, month of Olous, in Asangorna, the guardian of the law being... Who was also sent out by Demonax, the former...

And of Simus who was... By the agency of Diodorus, controller of revenues, acknowledges receipt from... The son of Dataes from the priests... That Antimachus would list his own associate kings argues strongly against the suggestion that he was appointed as a Northern associate ruler of Euthydemus and Demetrius, an idea that anyway is more or less unprecedented among Hellenistic kings. Eumenes and Antimachus could be his heirs; it was standard for Ptolemaic and Seleucid kings to include their sons as joint regents, with variable formal or actual power.

While Eumenes never issued any coins, a king named Antimachus II Nikephoros later appeared in India. It seems plausible that the Indian Antimachus was the son of Antimachus I, but it is unclear whether his reign in India overlapped with his father's reign in Bactria. Antimachus I issued numerous silver coins on the Attic standard, with his own image in a flat Macedonian kausia hat, and on the reverse Poseidon with his trident. Poseidon was the god of the ocean and great rivers - some scholars have here seen a reference to the provinces around the Indus River, where Antimachus I may have been a governor - but also the protector of horses, which was perhaps a more important function in the hinterland of Bactria. On his coinage, Antimachus called himself Theos , "The God", a first in the Hellenistic world.

Just like his colleague Agathocles, he issued commemorative coinage, in his case silver tetradrachms honouring Euthydemus I, also called "The God", and Diodotus I, called "The Saviour". This indicates that Antimachus I might have been instrumental in creating a royal state cult (see coin description:).

Antimachus I also issued round bronzes depicting an elephant on the obverse, with a reverse showing the Greek goddess of victory Nike holding out a wreath. The elephant could be a Buddhist symbol. These coins are reminiscent of those of Demetrius I, as well as Apollodotus I. Other bronzes, square and rather crude, also portray a walking elephant, but with a reverse of a thunderbolt. These have been attributed by Bopearachchi (as well as older scholars) to Arachosia.

They are Indian in their design, but the legend is only in Greek. World-renowned expert numismatist, enthusiast, author and dealer in authentic ancient Greek, ancient Roman, ancient Byzantine, world coins & more.

For on an overview about using my store, with additional information and links to all other parts of my store which may include educational information on topics you are looking for. The item "ANTIMACHOS I Greco-Baktrian Baktria Greek Silver Tetradrachm Coin NGC i72394" is in sale since Saturday, September 29, 2018. This item is in the category "Coins & Paper Money\Coins\ Ancient\Greek (450 BC-100 AD)". The seller is "highrating_lowprice" and is located in Rego Park, New York. This item can be shipped worldwide.