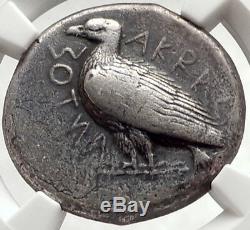 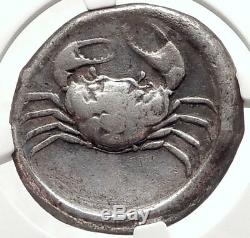 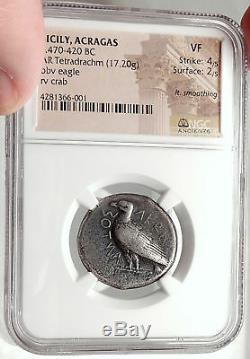 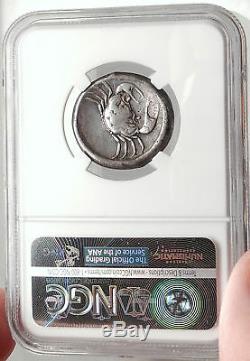 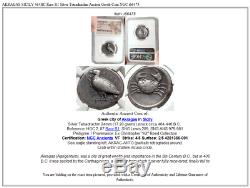 SNG Lewis 289, SNG ANS 979-981 Pedigree / Provenance: Ex Christopher "Kit" Reed Collection Certification: NGC Ancients. VF Strike: 4/5 Surface: 2/5 4281366-001 Sea eagle standing left; AKRAC-ANTO (partially retrograde) around. Crab within shallow incuse circle. Akragas (Agrigentum), was a city of great wealth and importance in the 5th Century B. It was sacked by the Carthaginians, a disaster from which it never fully recovered; finally fell to the Romans in 210 B.

Agrigento (Sicilian: Girgenti), is a city on the southern coast of Sicily, Italy, and capital of the province of Agrigento. It is renowned as the site of the ancient Greek city of Akragas also known as Acragas in Greek, Agrigentum in Latin and Kerkent in Arabic, one of the leading cities of Magna Graecia during the golden age of Ancient Greece. Agrigento was founded on a plateau overlooking the sea, with two nearby rivers, the Hypsas and the Akragas, and a ridge to the north offering a degree of natural fortification. Its establishment took place around 582-580 BCE and is attributed to Greek colonists from Gela, who named it Akragas.

Akragas grew rapidly, becoming one of the richest and most famous of the Greek colonies of Magna Graecia. It came to prominence under the sixth-century tyrants Phalaris and Theron, and became a democracy after the overthrow of Theron's son Thrasydaeus. Although the city remained neutral in the conflict between Athens and Syracuse, its democracy was overthrown when the city was sacked by the Carthaginians in 406 BCE. Akragas never fully recovered its former status, though it revived to some extent under Timoleon in the latter part of the fourth century. The city was disputed between the Romans and the Carthaginians during the First Punic War.

Although the Carthaginians recaptured the city in 255 BCE the final peace settlement gave Punic Sicily and with it Akragas to Rome. It suffered badly during the Second Punic War (218-201 BCE) when both Rome and Carthage fought to control it. The Romans eventually captured Akragas in 210 BCE and renamed it Agrigentum , although it remained a largely Greek-speaking community for centuries thereafter. It became prosperous again under Roman rule and its inhabitants received full Roman citizenship following the death of Julius Caesar in 44 BCE. After the fall of the Roman Empire, the city passed into the hands of the Ostrogothic Kingdom of Italy and then the Byzantine Empire. During this period the inhabitants of Agrigentum largely abandoned the lower parts of the city and moved to the former acropolis, at the top of the hill. The reasons for this move are unclear but were probably related to the destructive coastal raids of the Saracens, Berbers and other peoples around this time. In 828 CE the Saracens captured the diminished remnant of the city.

They pronounced its name as Kerkent in Arabic; it was thus Sicilianized as "Girgenti". It retained this name until 1927, when Benito Mussolini's government reintroduced an Italianized version of the Latin name.

Agrigento was captured by the Normans under Count Roger I in 1087, who established a Latin bishopric there. The population declined during much of the medieval period but revived somewhat after the 18th century.

In 1860, the inhabitants enthusiastically supported Giuseppe Garibaldi in his conquest of southern Italy (in the course of the Unification of Italy). The city suffered a number of destructive bombing raids during World War II.

Agrigento is a major tourist centre due to its extraordinarily rich archaeological legacy. It also serves as an agricultural centre for the surrounding region.

Sulphur and potash have been mined locally since Roman times and are exported from the nearby harbour of Porto Empedocle (named after the philosopher Empedocles who lived in ancient Akragas). However, it is one of the poorest towns in Italy on a per capita income basis and has a long-standing problem with organised crime, particularly involving the Mafia and the smuggling of illegal drugs. Main article: Valle dei Templi. Ancient Akragas covers a huge area - much of which is still unexcavated today - but is exemplified by the famous Valle dei Templi ("Valley of the Temples", a misnomer, as it is a ridge, rather than a valley). This comprises a large sacred area on the south side of the ancient city where seven monumental Greek temples in the Doric style were constructed during the 6th and 5th centuries BCE. Now excavated and partially restored, they constitute some of the largest and best-preserved ancient Greek buildings outside of Greece itself. They are listed as a World Heritage Site. The best-preserved of the temples are two very similar buildings traditionally attributed to the goddesses Juno Lacinia and Concordia (though archaeologists believe this attribution to be incorrect). The latter temple is remarkably intact, due to its having been converted into a Christian church in 597 CE. Both were constructed to a peripteral hexastyle design.

The area around the Temple of Concordia was later re-used by early Christians as a catacomb, with tombs hewn out of the rocky cliffs and outcrops. The other temples are much more fragmentary, having been toppled by earthquakes long ago and quarried for their stones. The largest by far is the Temple of Olympian Zeus, built to commemorate the Battle of Himera in 480 BCE: it is believed to have been the largest Doric temple ever built. Although it was apparently used, it appears never to have been completed; construction was abandoned after the Carthaginian invasion of 406 BCE. The remains of the temple were extensively quarried in the eighteenth century to build the jetties of Porto Empedocle.

Temples dedicated to Hephaestus, Heracles and Asclepius were also constructed in the sacred area, which includes a sanctuary of Demeter and Persephone (formerly known as the Temple of Castor and Pollux); the marks of the fires set by the Carthaginians in 406 BCE can still be seen on the sanctuary's stones. Many other Hellenistic and Roman sites can be found in and around the town. These include a pre-Hellenic cave sanctuary near a Temple of Demeter, over which the Church of San Biagio was built.

A late Hellenistic funerary monument erroneously labelled the "Tomb of Theron" is situated just outside the sacred area, and a first-century CE heroon (heroic shrine) adjoins the 13th century Church of San Nicola a short distance to the north. A sizeable area of the Greco-Roman city has also been excavated, and several classical necropoleis and quarries are still extant. Much of present-day Agrigento is modern but it still retains a number of medieval and Baroque buildings. These include the fourteenth century cathedral and the thirteenth century Church of Santa Maria dei Greci ("Our Lady of the Greeks"), again standing on the site of an ancient Greek temple (hence the name).

The town also has a notable archaeological museum displaying finds from the ancient city. Empedocles, the Greek pre-Socratic philosopher, was a citizen of ancient Agrigentum. Luigi Pirandello, dramatist and Nobel prize winner for literature.

Born at Contrada Kaos near Agrigento. World-renowned expert numismatist, enthusiast, author and dealer in authentic ancient Greek, ancient Roman, ancient Byzantine, world coins & more. Ilya Zlobin is an independent individual who has a passion for coin collecting, research and understanding the importance of the historical context and significance all coins and objects represent. Send me a message about this and I can update your invoice should you want this method. Getting your order to you, quickly and securely is a top priority and is taken seriously here.

For on an overview about using my store, with additional information and links to all other parts of my store which may include educational information on topics you are looking for. The item "AKRAGAS SICILY 464BC Rare R1 Silver Tetradrachm Ancient Greek Coin NGC i66475" is in sale since Tuesday, January 16, 2018. This item is in the category "Coins & Paper Money\Coins\ Ancient\Greek (450 BC-100 AD)". The seller is "highrating_lowprice" and is located in Rego Park, New York.