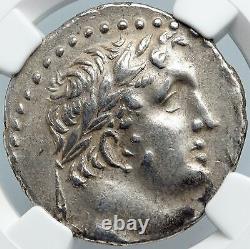 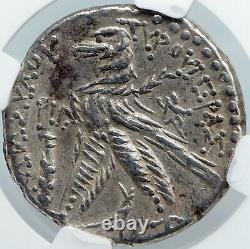 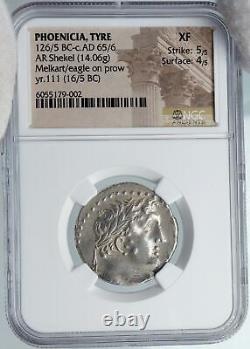 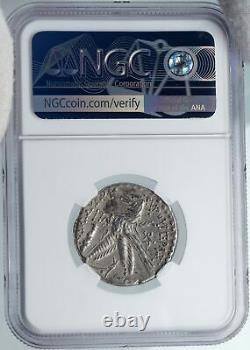 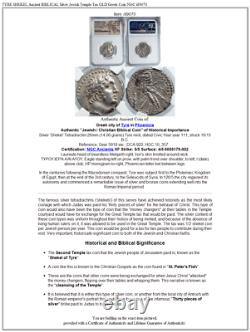 TYPOY IEPA-KAI AYOY, Eagle standing left on prow, with palm frond over shoulder; to left, I (date) above club; HP monogram to right, Phoenician letter bet between legs. In the centuries following the Macedonian conquest, Tyre was subject first to the Ptolemaic Kingdom of Egypt, then at the end of the 3rd century, to the Seleucids of Syria. In 126/5 the city regained its autonomy and commenced a remarkable issue of silver and bronze coins extending well into the Roman Imperial period. The famous silver tetradrachms ('shekels') of this series have achieved notoriety as the most likely coinage with which Judas was paid his'thirty pieces of silver' for the betrayal of Christ. The silver content of these coin types was uniform throughout their history of being minted, and because of the absence of living human rulers on it, it was allowed to be used in the Great Temple. Very important, historically-significant coin to both of the Jewish and Christian faiths. A coin like this is known to the Christian Gospels as the coin found in St. This narrative is known as the " cleansing of the Temple ". It is believed that it is either this type of silver coin, or another from the local city of Antioch with the Roman emperor's portrait that could have been one of the infamous " Thirty pieces of silver " bribe paid to Judas to betray Jesus. The Second Temple was an important Jewish Holy Temple (Hebrew: , Beit HaMikdash HaSheni) which stood on the Temple Mount in Jerusalem during the Second Temple period, between 516 BCE and 70 CE.

According to Judeo-Christian tradition, it replaced Solomon's Temple (the First Temple), which was destroyed by the Neo-Babylonian Empire in 586 BCE, when Jerusalem was conquered and a portion of the population of the Kingdom of Judah was taken into exile in Babylon. Jewish eschatology includes a belief that the Second Temple will be replaced by a future Third Temple. Exodus 30:13 This is what each one who is registered shall give: half a shekel according to the shekel of the sanctuary (the shekel is twenty gerahs), half a shekel as an offering to the Lord.

The coins were the size of a modern Israeli half-shekel and were issued by Tyre, in that form, between 126 BC and 67 AD. Earlier Tyrian coins with the value of a tetradrachm, bearing various inscriptions and images, had been issued beginning in the latter half of the fifth century B.

21:12 and parallels exchanged Tyrian shekels for common Roman currency. The coin in the fish's mouth, or St. Peter's Fish, is one of the miracles of Jesus, told in the Gospel of Matthew 17:24-27. " Peter answers, "from others, " and Jesus replies: "Then the children are exempt. But so that we may not cause offense, go to the lake and throw out your line.

Take the first fish you catch; open its mouth and you will find a four-drachma coin. The story ends at this point, without stating that Peter caught the fish as Jesus predicted.

It is usually thought to be a Tyrian shekel. The coin in the fish's mouth is generally seen as a symbolic act or sign, but there is little agreement concerning what it signifies. The Bible does not specify the species of the fish caught by Peter, but Tilapia is sometimes referred to as St. In the Gospel of John Jesus refers to the Temple as "my Father's house", thus, making a claim to being the Son of God. The narrative occurs near the end of the Synoptic Gospels (at Matthew 21:12-17, Mark 11:15-19, and Luke 19:45-48) and near the start in the Gospel of John (at John 2:13-16). Some scholars believe that these refer to two separate incidents, given that the Gospel of John also includes more than one Passover. Thirty pieces of silver was the price for which Judas Iscariot betrayed Jesus, according to an account in the Gospel of Matthew 26:15 in the New Testament.

Tyre was founded around 2750 BC according to Herodotus and it appears on monuments as early as 1300 BC. Philo of Byblos (in Eusebius) quotes the antiquarian authority Sanchuniathon as stating that it was first occupied by one Hypsuranius. Sanchuniathon's work is said to be dedicated to "Abibalus king of Berytus" -- possibly the Abibaal who was king of Tyre. There are ten Amarna letters dated 1350 BC from the mayor, Abi-Milku, written to Akenaten. The subject is often water, wood, and the Habiru overtaking the countryside, of the mainland, and how it affected the island-city.

The commerce of the ancient world was gathered into the warehouses of Tyre. "Tyrian merchants were the first who ventured to navigate the Mediterranean waters; and they founded their colonies on the coasts and neighbouring islands of the Aegean Sea, in Greece, on the northern coast of Africa, at Carthage and other places, in Sicily and Corsica, in Spain at Tartessus, and even beyond the pillars of Hercules at Gadeira (Cádiz)" In the time of King David c. 1000 BC, a friendly alliance was entered into between the Kingdoms of Israel and Tyre, which was ruled by Hiram I.

The city of Tyre was particularly known for the production of a rare and extraordinarily expensive sort of purple dye, produced from the murex shellfish, known as Tyrian purple. This color was, in many cultures of ancient times, reserved for the use of royalty, or at least nobility. It was often attacked by Egypt, besieged by Shalmaneser V, who was assisted by the Phoenicians of the mainland, for five years, and by Nebuchadnezzar (586-573 BC) for thirteen years, without success, although a compromise peace was made in which Tyre paid tribute to the Babylonians. It later fell under the power of the Persians.

In 332 BC, the city was conquered by Alexander the Great, after a siege of seven months in which he built the causeway from the mainland to the island, but it continued to maintain much of its commercial importance until the Christian era. The presence of the causeway affected water currents nearby, causing sediment to build up, making the connection permanent. In 315 BC, Alexander's former general Antigonus began his own siege of Tyre, taking the city a year later. In 126 BC, Tyre regained its independence (from the Seleucids) and was allowed to keep much of its independence when the area became a Roman province in 64 BC. World-renowned expert numismatist, enthusiast, author and dealer in authentic ancient Greek, ancient Roman, ancient Byzantine, world coins & more.

How and where do I learn more about collecting ancient coins? Visit the Guide on How to Use My Store. For on an overview about using my store, with additional information and links to all other parts of my store which may include educational information on topics you are looking for. The item "TYRE SHEKEL Ancient BIBLICAL Silver Jewish Temple Tax OLD Greek Coin NGC i89070" is in sale since Wednesday, July 14, 2021. This item is in the category "Coins & Paper Money\Coins\ Ancient\Greek (450 BC-100 AD)".