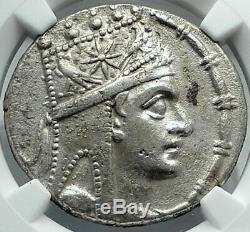 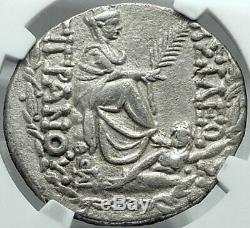 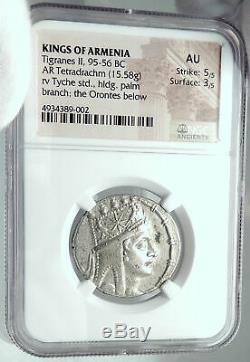 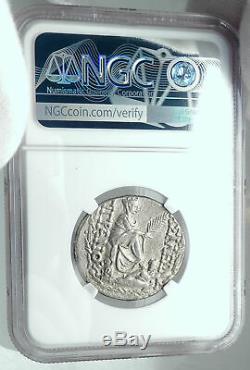 ARMENIA Tigranes II'the Great' - King: 95-56 B. Silver Tetradrachm 27 mm (15.65 grams, 12 h), Tigranocerta mint, struck circa 80-68 B. Certification: NGC Ancients AU Strike: 5/5 Surface: 3/5 4934389-002 Head of Tigranes II to right, wearing diademed tiara with five peaks and ornamented with an eight-pointed star between two eagles, their heads turned back towards the star; beed and reel border. / Turreted and draped Tyche of Artaxata seated to right on rocks, holding palm with her outstretched right hand; on rock, monogram of with circular monogram above; at her feet to right, the river god Araxes; all within laurel wreath.

The people of Seleucia, wearied by the endless fratricidal wars of the Seleucids, called upon the King of Armenia to restore order in heir country. He defeated Philip and ruled the Seleucid kingdom for the following fourteen years, issuing coinage on the Seleucid pattern. Eventually he was driven out of Seleucia by the Roman general Lucullus. Tigranes the Great (Armenian: ; EA: Tigran Mets , WA: Tigran Medz , Greek:) (140 - 55 BCE; also called Tigranes II and sometimes Tigranes I) was emperor of Armenia under whom the country became, for a short time, the strongest state east of the Roman Republic.

He was a member of the Artaxiad Royal House. Under his reign, the Armenian kingdom expanded beyond its traditional boundaries, allowing Tigranes to claim the title Great King, and involving Armenia in many battles against opponents such as the Parthian and Seleucid empires, and the Roman Republic. Tigranes had been a hostage until the age of 40 at the court of King Mithradates II of Parthia who defeated the Armenians in 105 BCE.

When he came to power, the foundation upon which Tigranes was to build his Empire was already in place, a legacy of the founder of the Artaxiad Dynasty, Artaxias I, and subsequent kings. The mountains of Armenia, however, formed natural borders between the different regions of the country and as a result, the feudalistic nakharars had significant influence over the regions or provinces in which they were based.

This did not suit Tigranes, who wanted to create a centralist empire. He thus proceeded by consolidating his power within Armenia before embarking on his campaign. He deposed Artanes, the last king of Armenian Sophene and a descendant of Zariadres. During the First Mithridatic War (90-85 BCE), Tigranes supported Mithridates VI of Pontus but was careful not to become directly involved in the war. He rapidly built up his power, allying with Mithridates VI of Pontus and marrying his daughter Cleopatra.

Tigranes had agreed that he was to extend his influence in the East, while Mithridates was to conquer Roman land in Anatolia and in Europe. By creating a stronger Hellenistic state, Mithridates was to contend with the well-established Roman foothold in Europe. 80,000 people were slaughtered in the province of Asia Minor, known as the Asiatic Vespers. The two kings' attempts to control Cappadocia and then the massacres resulted in guaranteed Roman intervention. The senate decided on Lucius Cornelius Sulla, who was then one of the current consuls, to be commander of the army against Mithridates.

Wars against the Parthians and Seleucids. After the death of Mithridates II of Parthia in 88 BCE, Tigranes took advantage of the fact that the Parthian Empire had been weakened by Scythian invasions and internal squabbling.

Tigranes the Great's Armenian Empire Tigranes the Great's Armenian Empire. In 83 BC, after a bloody strife for the throne of Syria, governed by the Seleucids, the Syrians decided to choose Tigranes as the protector of their kingdom and offered him the crown of Syria. Magadates was appointed as his governor in Antioch. He then conquered Phoenicia and Cilicia, effectively putting an end to the last remnants of the Seleucid Empire, though a few holdout cities appear to have recognized the shadowy boy-king Seleucus VII Philometor as the legitimate king during his reign.

The southern border of his domain reached as far as Ptolemais (modern Akko). Many of the inhabitants of conquered cities were sent to his new metropolis of Tigranakert (Latin name, Tigranocerta). At its height, his empire extended from the Pontic Alps (in modern north-eastern Turkey) to Mesopotamia, and from the Caspian Sea to the Mediterranean. Tigranes apparently invaded territories as far away as Ecbatana and took the title king of kings which, at the time, according to their coins, even the Parthian kings did not assume. He was called "Tigranes the Great" by many Western historians and writers, such as Plutarch.

The "King of Kings" never appeared in public without having four kings attending him. Cicero, referring to his success in the east, said that he made the Republic of Rome tremble before the prowess of his arms. Tigranes' coin consist of tetradrachms and copper coins having on the obverse his portrait wearing a decorated Armenian tiara with ear-flaps. The reverse has a completely original design. There are the seated Tyche of Antioch and the river god Orontes at her feet. Tigranes the Great with four Kings surrounding him. Mithridates had found refuge in Armenian land after confronting Rome, considering the fact that Tigranes was his ally and relative. The "King of Kings" eventually came into direct contact with Rome. The Roman commander, Lucullus, demanded the expulsion of Mithridates from Armenia - to comply with such a demand would be, in effect, to accept the status of vassal to Rome and this Tigranes refused. Charles Rollins, in his Ancient History , says. Tigranes, to whom Lucullus had sent an ambassador, though of no great power in the beginning of his reign, had enlarged it so much by a series of successes, of which there are few examples, that he was commonly surnamed King of Kings. After having overthrown and almost ruined the family of the kings, successors of the great Seleucus; after having very often humbled the pride of the Parthians, transported whole cities of Greeks into Media, conquered all Syria and Palestine, and given laws to the Arabians called Scenites, he reigned with an authority respected by all the princes of Asia. The people paid him honors after the manners of the East, even to adoration. Lucullus' reaction was an attack that was so precipitate that he took Tigranes by surprise. According to Roman historians, the messenger who first brought news of the unexpected Roman attack was executed. Eventually Mithrobazanes, one of Tigranes generals, told Tigranes of the Roman approach. Tigranes was, according to Keaveney, so impressed by Mithrobazanes' courage that he appointed Mithrobazanes to command an army against Lucullus - Mithrobazanes was however defeated and killed. After this defeat Tigranes withdrew north to Armenia to regroup which left Lucullus free to put Tigranocerta under siege. On October 6, 69 BCE, Tigranes' much larger force was decisively defeated by the Roman army under Lucullus in the Battle of Tigranocerta. Tigranes' treatment of the inhabitants (the majority of the population had been forced to move to the city) led disgruntled city guards to open the gates of the city to the Romans. Learning of this, Tigranes hurriedly sent 6000 cavalrymen to the city in order to rescue his wives and some of his assets. Tigranes escaped capture with a small escort. On the 6 October 68 BCE, the Romans approached the old capital of Artaxata. Tigranes' and Mithridates' combined Armeno-Pontian army of 70,000 men formed up to face them but were resoundingly defeated.

Once again, both Mithridates and Tigranes evaded capture by the victorious Romans. The long campaigning and hardships that Lucullus' troops had endured for years, combined with a perceived lack of reward in the form of plunder, led to successive mutinies among the legions in 68-67. Frustrated by the rough terrain of Northern Armenia and seeing the worsening moral of his troops, Lucullus moved back south and put Nisibis under siege. Tigranes concluded (wrongly) that Nisibis would hold out and sought to regain those parts of Armenia that the Romans had captured.

Despite his continuous success in battle, Lucullus could still not capture either one of the monarchs. With Lucullus' troops now refusing to obey his commands, but agreeing to defend positions from attack, the senate sent Gnaeus Pompey to recall Lucullus to Rome and take over his command. Pompey and the reconciliation with Rome. Pompey was given the task of defeating Mithradates and Tigranes. Pompey first concentrated on attacking Mithradates while distracting Tigranes by engineering a Parthian attack on Gordyeyne.

Phraates III, the Parthian king was soon persuaded to take things a little further than an anexation of Gordyeyne when a son of Tigranes (also named Tigranes) went to join the Parthians and persuaded Phraates to invade Armenia in an attempt to replace the elder Tigranes with the younger. Tigranes decided not to meet the invasion in the field but instead ensured that his capital, Artaxata, was well defended and withdrew to the hill country.

Phraates soon realized that Artaxata would not fall without a protracted siege, the time for which he could not spare due his fear of plots at home. Once Phraates left Tigranes came back down from the hills and drove his son from Armenia. The son then fled to Pompey.

In 66 BCE, Pompey advanced into Armenia with the younger Tigranes, and Tigranes the Great, now almost 75 years old, surrendered. Pompey treated him generously and allowed him to retain his kingdom shorn of his conquests in return for 6,000 talents of silver.

His unfaithful son was sent back to Rome as a prisoner. Tigranes continued to rule Armenia as an ally of Rome until his death in 55/54. A recent ABC News article on May 19, 2004 noted that according to the Armenian and Italian researchers the symbol on his crown that features a star with a curved tail may represent the passage of Halley's Comet in 87 BCE. Tigranes could have seen Halley's comet when it passed closest to the Sun on August 6 in 87, according to the researchers, who said the comet would have been a'most recordable event'- heralding the New Era of the King of Kings. Hayk Khachatryan, an Armenian novelist, wrote a book called Tigran the Great. The item "TIGRANES II 80BC Authentic Ancient Armenian Silver Greek Coin Armenia NGC AU" is in sale since Monday, May 13, 2019. This item is in the category "Coins & Paper Money\Coins\ Ancient\Greek (450 BC-100 AD)". The seller is "victoram" and is located in Forest Hills, New York. This item can be shipped worldwide.