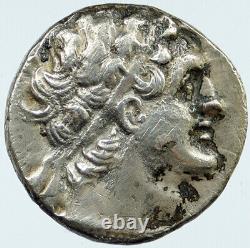 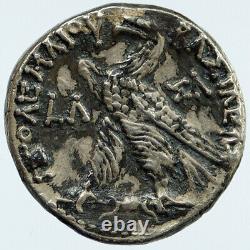 "Fatty", was a king of the Ptolemaic dynasty in Egypt. He was the younger son of Ptolemy V Epiphanes and Cleopatra I Syra. His reign was characterised by fierce political and military conflict with his older brother Ptolemy VI Philometor and his sister Cleopatra II.

In 164 BC Ptolemy VIII drove out his brother and became sole king of the Ptolemaic empire, but he was expelled in turn in 163 BC. As a result of Roman intervention, Ptolemy VIII was awarded control of Cyrenaica. From there he repeatedly tried to capture Cyprus, which had also been promised to him by the Romans, from his brother. His cruel treatment of opposition and his decision to marry his niece Cleopatra III and promote her to the status of co-regent led to a civil war from 132 to 126 BC, in which Cleopatra II controlled Alexandria and enjoyed the support of the Greek population of the country, while Ptolemy VIII and Cleopatra III controlled most of the rest of Egypt and were supported by the native Egyptians. During this war, native Egyptians were promoted to the highest echelons of the Ptolemaic government for the first time.

Ptolemy was victorious and ruled alongside Cleopatra II and Cleopatra III until his death in 116 BC. The ancient Greek sources on Ptolemy VIII are extremely hostile, characterising him as cruel and mocking him as fat and degenerate, as part of a contrast with Ptolemy VI, whom they present extremely positively. The historian Günther Hölbl calls him one of the most brutal and at the same time one of the shrewdest politicians of the Hellenistic Age. The Ptolemaic Kingdom was a Hellenistic kingdom based in Egypt. It was ruled by the Ptolemaic dynasty which started with Ptolemy I Soter's accession after the death of Alexander the Great in 323 BC- and which ended with the death of Cleopatra VII and the Roman conquest in 30 BC.

The Ptolemaic Kingdom was founded in 305 BC by Ptolemy I Soter, who declared himself Pharaoh of Egypt and created a powerful Hellenistic dynasty that ruled an area stretching from southern Seleukid Kingdom to Cyrene and south to Nubia. Alexandria became the capital city and a major center of Greek culture and trade. To gain recognition by the native Egyptian populace, they named themselves the successors to the Pharaohs. The later Ptolemies took on Egyptian traditions by marrying their siblings, had themselves portrayed on public monuments in Egyptian style and dress, and participated in Egyptian religious life.

The Ptolemies had to fight native rebellions and were involved in foreign and civil wars that led to the decline of the kingdom and its final annexation by Rome. Hellenistic culture continued to thrive in Egypt throughout the Roman and Byzantine periods until the Muslim conquest. World-renowned expert numismatist, enthusiast, author and dealer in authentic ancient Greek, ancient Roman, ancient Byzantine, world coins & more.

Additionally, the coin is inside it's own protective coin flip (holder), with a 2x2 inch description of the coin matching the individual number on the COA. Whether your goal is to collect or give the item as a gift, coins presented like this could be more prized and valued higher than items that were not given such care and attention to. When should I leave feedback? Please don't leave any negative feedbacks, as it happens sometimes that people rush to leave feedback before letting sufficient time for their order to arrive. The matter of fact is that any issues can be resolved, as reputation is most important to me. My goal is to provide superior products and quality of service. How and where do I learn more about collecting ancient coins? Visit the Guide on How to Use My Store. For on an overview about using my store, with additional information and links to all other parts of my store which may include educational information on topics you are looking for. This item is in the category "Coins & Paper Money\Coins: Ancient\Greek (450 BC-100 AD)". The seller is "highrating_lowprice" and is located in this country: US. This item can be shipped worldwide.
athenaatticacertifiedkingsraregreece440-404tetradrachmcoinantiochusancientegyptanacskingdomchoiceathenscoinsstyleseleucidstrikefinethracetestgreatptolemyalexanderphilipromansilver454-404macedoncondition336-323seleukidgreek