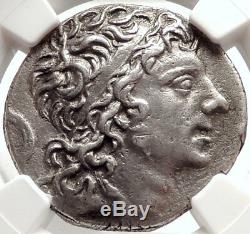 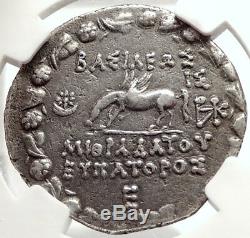 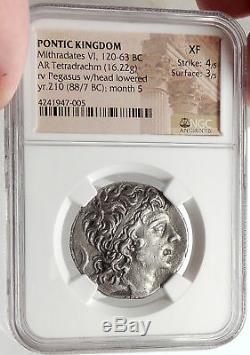 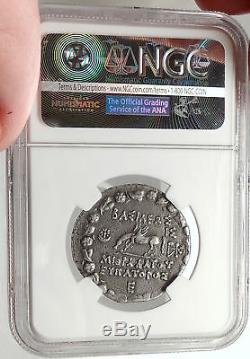 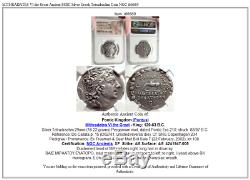 BAIE MIPAATOY EYATOPO, stag grazing left; star-in-crescent to left; to right, I (year) above BK monogram; E (month 5) in exergue; all within Dionysiac wreath. Mithridates VI or Mithradates VI (Greek:), from Old Persian Mithradatha , "gift of Mithra"; 134-63 BC, also known as Mithradates the Great (Megas) and Eupator Dionysius , was king of Pontus and Armenia Minor in northern Anatolia (now Turkey) from about 120-63 BC.

Mithridates is remembered as one of the Roman Republic's most formidable and successful enemies, who engaged three of the prominent generals from the late Roman Republic in the Mithridatic Wars: Lucius Cornelius Sulla, Lucullus and Pompey. He was also the greatest ruler of the Kingdom of Pontus.

Pontus is a historical Greek designation for a region on the southern coast of the Black Sea, located in modern-day eastern Black Sea Region of Turkey. The name was applied to the coastal region and its mountainous hinterland (rising to the Pontic Alps in the east) in antiquity by the Greeks who colonized the area and derived from the Greek name of the Black Sea: Pontos Euxeinos ("Hospitable Sea"), or simply Pontos.

Having originally no specific name, the region east of the river Halys was spoken of as the country En Ponti , "on the [Euxeinos] Pontos", and hence it acquired the name of Pontus, which is first found in Xenophon's Anabasis. The extent of the region varied through the ages but generally extended from the borders of Colchis (modern Georgia) until well into Paphlagonia in the west, with varying amounts of hinterland. Several states and provinces bearing the name of Pontus or variants thereof were established in the region in the Hellenistic, Roman and Byzantine periods, culminating in the late Byzantine Empire of Trebizond. Pontus is sometimes considered as the home of the Amazons, with the name Amazon used not only for a city (Amasya) but for all of Pontus in Greek mythology. Pontus became important as a bastion of Byzantine Greek and Greek Orthodox civilization and attracted Greeks from all backgrounds (scholars, traders, mercenaries, refugees) from all over Anatolia and the southern Balkans, from the Classical and Hellenistic periods into the Byzantine and Ottoman.

These Greeks of Pontus are generally referred to as Pontic Greeks. World-renowned expert numismatist, enthusiast, author and dealer in authentic ancient Greek, ancient Roman, ancient Byzantine, world coins & more. Ilya Zlobin is an independent individual who has a passion for coin collecting, research and understanding the importance of the historical context and significance all coins and objects represent.

Visit the "Guide on How to Use My Store". For on an overview about using my store, with additional information and links to all other parts of my store which may include educational information on topics you are looking for.

The item "MITHRADATES VI the Great Ancient 88BC Silver Greek Tetradrachm Coin NGC i66669" is in sale since Wednesday, January 16, 2019. This item is in the category "Coins & Paper Money\Coins\ Ancient\Greek (450 BC-100 AD)". The seller is "highrating_lowprice" and is located in Rego Park, New York. This item can be shipped worldwide.