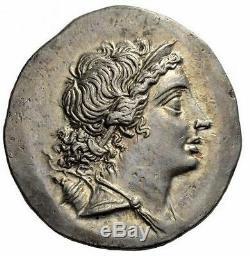 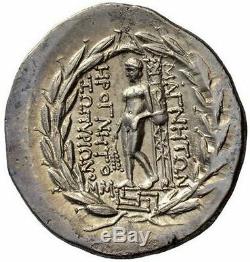 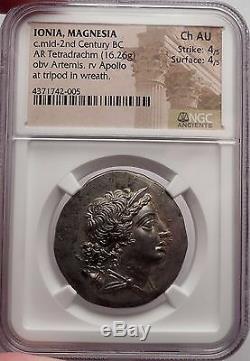 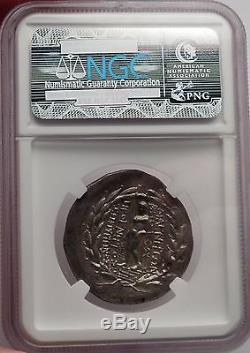 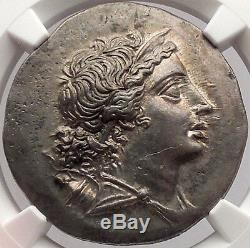 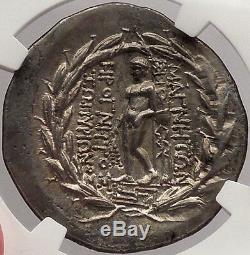 IONIA: MAGNESIA AD MAEANDRUM Silver Tetradrachm 32mm, 16.30 gm. Magnesia ad Maeandrum , 155-145 B. Under the magistrate Erognetos son of Zopyrion. Certification: NGC Ancients Ch AU Strike: 4/5 Surface: 4/5 4371742-005 Diademed bust of Artemis to right, with bow and quiver at her shoulder. / / Apollo standing left on maeander pattern, holding filleted laurel branch with his right hand and leaning his left elbow on a tripod behind him; all within laurel wreath. Situated south-east of Ephesus, on a tributary of the Maeander, Magnesia was originally founded from Thessaly but was re-established by colonists from Miletos in the 7th century B. Magnesia (Greek: , Magnisía , IPA: [manisia]), deriving from the tribe name Magnetes , is the name of the southeastern area of Thessaly in central Greece. The modern prefecture was created in 1947 out of the Larissa prefecture. About 70% of the population live in the Greater Volos area which is the second-largest city in Thessaly and the third busiest commercial port in Greece. Much of the population lives near the Pagasetic Gulf and in the eastern part.

The chemical element, Magnesium, was named after the "City of Magnesia" by Sir Humphrey Davy in 1808. The capital of Magnesia prefecture is the metropolitan city of Volos. According to the most recent census (2001), the population stands at 207,000.

The prefecture of Magnesia includes the Northern Sporades group of islands Skiathos, Skopelos and Alonissos. The prefecture also includes the Alonissos Marine Park. The prefecture hosts 2,000,000 tourists annually. Magnesia is represented in the Greek Parliament by five members. The natural landscape of Magnesia consists of wooded mountains, cultivated flat land, and coastline. One of the area's main elements is the Pelion mountain range which is located the eastern region of the Prefecture and forms the eastern edge of the Pagasetic Gulf. The ranges' highest peak is Pourianos Stavros or Xeforti, (altitude 1624 meters). On the edge of Magnesia peninsula Tiseo mountain is found, which is considered to be the Southeast edge of Pelion.

The interior of Magnesia has two plains. Halkodonio (725 metres) and Othry is called Almyros plain, while the other between Halkodonio and Pelion is called the Volos-Velestino plain. The hydro-logical network of the prefecture is not particularly rich and is characterized by the absence of big rivers. The waters coming from Pelion shape the rivers Anavros, Platanorema, and Xirias.

In the North section of the prefecture Lake Karla was formerly found. Lake Karla was drained in 1962, but attempts have been made for its partial restoration. On the bight of Sourpi, next to Amaliapolis a coastal wetland is found, with various species of migratory birds. This wetland together with the forest of Kouri - an infrequent lowland of Oak tree forest close to Almyros - is included in the list of the protected regions of the European Network Natura 2000. The Pagasetic Gulf dominates the interior coastline of Magnesia. The average temperature is 17 degrees Celsius and the average rainfall about 540 millimetres per year.

Heat waves and intense cold periods are rare. During the summer the temperature rises up to about 37 to 38 °C in August. The climate varies in different parts of the prefecture; close to the Pagasetic Gulf conditions are humid, in Nea Ionia it is quite dry and in Velestino and Almyros is the climate is continental. In winter there is significant snowfall in the mountains and often freezing temperatures. According to Hesiod's (probably) "Eoiae" (Greek:) or "Catalogue of Women".

On the origin of the Greeks, Pandora (named after her grandmother Pandora, sister of Hellen and daughter of Deukalion and Pyrrha) together with Zeus had one son Graecus, while Zeus had two more with Thyia, another of Deukalion's daughter: Magnes and Macedon. Magnes and Makednos together with Hellen's three sons Dorus, Xuthus (with his sons Ion and Achaeus) and Aeolos, comprised the set of progenitors of the ancient tribes that formed the Greek/Hellenic nation. Magnes ruled the area and people under his name. Magnesia is also homeland of the mythical heroes Jason, Peleus and his son Achilles.

The word magnet comes from the Greek "magnítis líthos" , which means "magnesian stone". The names for the elements magnesium and manganese are also derived from this region, which in addition to the magnetic magnetite (an iron ore), produces certain ores of magnesium and manganese that were known to alchemists. The Magnetes contributed to the Greek colonization, with their main colonies being established before the 7th century BC, under the names of Magnesia beside Sipylus in Lydia and Magnesia on the Maeander in Ionia.

Written accounts and remains from the 5th century AD document the appearance of Christianity in Magnesia. The minutes of the 3rd Ecumenical Conference are co-signed by the Bishop of Dimitriada Cleonikos.

Five basilicas have been revealed in Nea Anhialos, showing that the area was undergoing a spiritual growth in that era. Magnesias has churches, monasteries and chapels, many of which are architectural masterpieces in the style that is called "Pelioritica". In the area of Pelion are the monastery of Saint Yerasimos in Makrinitsa, The Holy Archangels in Agios Georgios Nilias, Osios Lavredios in Agios Lavrendis, Saint John the Baptist in Siki and Saint Spiridon in Promiri.

The most famous is the Monastery in Flamouri, built in the 16th century by Osios Simeon, the so-called "barefoot and loin-clothed", located above Veneto. In the Almiros area and on the mountain of Othris two other monasteries were built, one inhabited by monks in Ano Pagania (Virgin Mary) Xenia and the other by nuns in Kato Panagia Xenia. This monastery holds historical monuments of the area from the 12th century, with of frescoes, treasuries and a library. In Kato Panagia Xenia monastery, an icon of the Virgin Mary, venerated by the people of the area, is kept. All the monasteries are of archaeological, historical and artistic interest and are accessible (the one in Flamouri only by men). The item "MAGNESIA ad MAEANDRUM in IONIA 155BC NGC Certified Ch AU Tetradrachm Greek Coin" is in sale since Tuesday, May 17, 2016.