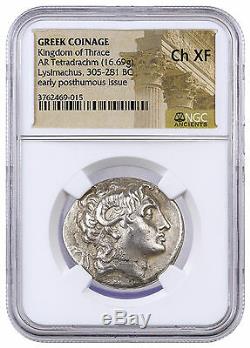 Why add this Posthumous Silver Tetradrachm of Lysimachus to your collection of ancient coins? Lysimachus continued the practice of posthumously minting coins with Alexander's image on them long after the empire was split up. Eager to expand his region into Asia Minor, Lysimachus believed the images of a deified Alexander, Athena, and the winged Nike portrayed a powerful message about his right to rule. In order to fund the daily operations of government, he expanded his empire to gain access to silver mines. Tetradrachm from many areas circulated together, however they were standardized about 31 mm in diameter and 16.8g of mostly silver content to encourage commerce.

Why were images of Nike and Athena selected? The reverse is the winged Nike, symbol of Victory, placing a laureled wreath onto Lysimachus name, Athena, the Goddess of War, seated facing left, holding Nike in her left hand and right arm laying on shield with spear on shoulder as if she is resting from efforts to crown Lysimachus the rightful heir to Alexander the Great. The obverse is Alexander, bust right, ornamented with crown and the ram-horn of Ammon, a form of Zeus. What does Ch XF mean? This specimen is graded Choice Extremely Fine, with Sheldon scale equivalent of 45 by the Numismatic Guaranty Corporation (NGC).

Coins receiving this grade exhibit full and sharp details, with some Mint luster in protected areas of the coin's surface. Add this wonderful silver Tetradrachm to your collection. Specifications for this Greek Kingdom of Thrace Silver Tetradrachm of Early Posthumous Lysimachus (305-281 BC) - Alexander III and Athena NGC Ch XF SKU42222. We cannot make any price adjustments after the sale is complete.

Product Photo Policy: MCM attempts to display product images shown on the site as accurately as possible. We take all of our photos in house and due to reflections on the mirrored or proof surfaces of a coin there may appear to be'black' when there is not. If a coin has a color on it at all it will be described as'colorized' in the description or title. Due to the large inventory we sell, we use stock photos.

Serial numbers will vary from the image shown unless specifically stated in the product listing that the item pictured is the item you will receive. INTERNATIONAL ORDERS POLICY: We are accepting international orders from select countries.

These charges are the customer's responsibility. However, we cannot guarantee this due to the volume of orders we process each day. Beyond the 30-day return period, Company is under no obligation to accept return of any product, but may in its discretion do so pursuant to this policy, for up to one year from the invoice date.

ModernCoinMart (MCM) was launched in 2004 and quickly set the standards for online sales of bullion, US coins and world coins. Join over 100,000 loyal customers and feel confident purchasing from a company that's spent a decade building a solid and stellar reputation trusted and recognized around the world. That's the MCM way. This listing is currently undergoing maintenance, we apologise for any inconvenience caused. The item "Greek Thrace Silver Tetradrachm Early Posthumous Lysimachus NGC Ch XF SKU42222" is in sale since Friday, April 28, 2017. This item is in the category "Coins & Paper Money\Coins\ Ancient\Greek (450 BC-100 AD)". The seller is "mcm" and is located in Sarasota, Florida. This item can be shipped worldwide.