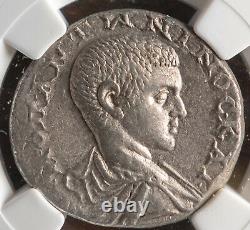 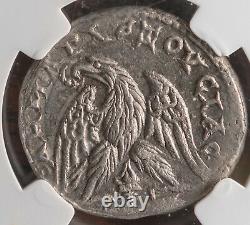 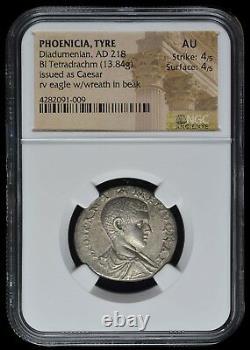 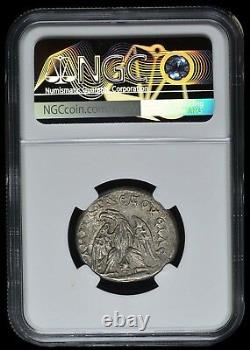 Eagle and shell on reverse are quite bold. Very rare type of an Emperor who didn't last long, barely a year. Please view our high resolution photos.

Diadumenian (/daædminin/; Latin: Marcus Opellius Antoninus Diadumenianus Augustus) (September 14/19, 208 218), was briefly Roman Emperor, in 218. He was born to Macrinus, the future emperor, and Nonia Celsa, whose name may be fictitious, on 14 September 208. He was elevated to Caesar in May 217, and after Elagabalus revolted in May, Diadumenian was elevated to co-emperor. After Macrinus was defeated in the Battle of Antioch, on 8 June 218, Diadumenian was sent to the court of Artabanus V to ensure his safety; however he was captured and executed along the way, in late June. History Diadumenian was born on 14 September 208, named Marcus Opellius Diadumenianus, to Macrinus, the Praetorian Prefect and future emperor, and his possibly fictitious wife Nonia Celsa.

Diadumenian was elevated to caesar in April 217, at Zeugma, while his guard was escorting him from Antioch to Mesopotamia, to join his father. He was also given the name Antoninus, in honor of the Antonine dynasty, at this time. Elagabalus revolted at Emesa on 16 May 218, after which Macrinus led his legions to the praetorian fort at Apamea.

There Macrinus elevated Diadumenian to augustus, making him co-emperor. After Macrinus was defeated by Elagabalus on 8 June 218, at the Battle of Antioch, Macrinus fled north to the Bosporus, and entrusted Diadumenian to loyal servants, instructing them to take him into the Parthian Empire, to the court of Artabanus V, to ensure his safety. Diadumenian was captured en route in Zeugma, and executed in late June.

His head was brought to Elagabalus, and recordedly kept as a trophy. While caesar, a large number of coins were struck for Diadumenian, although less than the amount struck for his father.

Extant artifacts of his coinage as augustus are extremely limited, and the only extant coins from this time are denarii. This has led to the suggestion, first proposed by Curtis Clay, that a large issue of coins was being made for Diadumenian, however they were quickly melted down when the news of Macrinus' defeat spread. Notably, some eastern provincial coins from the period exist which give Diadumenian the title sebastos, at the time the Greek equivalent of the Roman augustus. In terms of gold coins, Diadumenian has one known style of Aureus, bearing his bust on the obverse, and displaying Spes standing on the reverse, and one known style of Half-Aureus, bearing his bust on the obverse, and displaying himself holding a sceptre and standard.

The item "DIADUMENIAN AR Tetradrachm TYRE Extremely Rare NGC AU4/4 Phoenicia, AD 217-218" is in sale since Sunday, September 9, 2018. This item is in the category "Coins & Paper Money\Coins\ Ancient\Roman\ Provincial (100-400 AD)". The seller is "appreciatingobjects" and is located in San Leandro, California. This item can be shipped worldwide.