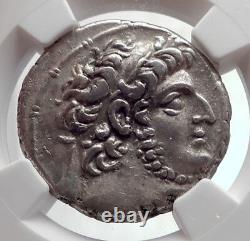 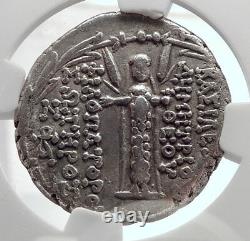 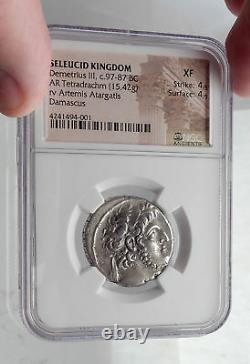 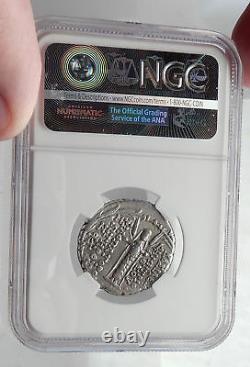 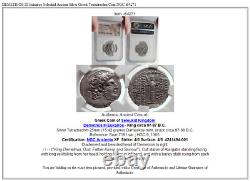 Silver Tetradrachm 25mm (15.42 grams) Damaskos mint, struck circa 97-88 B. HGC 9, 1305 Certification: NGC Ancients. XF Strike: 4/5 Surface: 4/5 4241494-001 Diademed and bearded head of Demetrios to right. S (" King Demetrius, God, Father-loving and Saviour "), Cult statue of Atargatis standing facing with long veil falling from her head, holding flower in left hand, and with a barley stalk rising from each shoulder; all within wreath. Demetrius III (died 88 BC), called Eucaerus ("well-timed" possibly a misunderstanding of the derogative name Akairos, "the untimely one"), Philopator and Soter, was a ruler of the Seleucid kingdom, the son of Antiochus VIII Grypus and his wife Tryphaena.

By the assistance of Ptolemy IX Lathyros, king of Egypt, he recovered part of his father's Syrian dominions ca. 95 BC, and held his court at Damascus, from where he tried to enlarge his dominions.

To the south he defeated the Maccabean king Alexander Jannaeus in battle, following an assistance request of Jewish rebels, but the hostility of the local Jewish population forced him to withdraw. While attempting to dethrone his brother, Philip I Philadelphus, he was defeated by the Arabs and the Parthian Empire, and taken prisoner.

He was kept in confinement in Parthia by Mithridates II until his death in 88. The Seleucid Empire was a Hellenistic state ruled by the Seleucid dynasty founded by Seleucus I Nicator following the division of the empire created by Alexander the Great. Seleucus received Babylonia and, from there, expanded his dominions to include much of Alexander's near eastern territories. At the height of its power, it included central Anatolia, the Levant, Mesopotamia, Kuwait, Persia, Afghanistan, Turkmenistan, and northwest parts of India. The Greek population of the cities who formed the dominant elite were reinforced by emigration from Greece. Seleucid expansion into Anatolia and Greece was abruptly halted after decisive defeats at the hands of the Roman army. Their attempts to defeat their old enemy Ptolemaic Egypt were frustrated by Roman demands. Much of the eastern part of the empire was conquered by the Parthians under Mithridates I of Parthia in the mid-2nd century BC, yet the Seleucid kings continued to rule a rump state from the Seleukid Kingdom until the invasion by Armenian king Tigranes the Great and their ultimate overthrow by the Roman general Pompey. World-renowned expert numismatist, enthusiast, author and dealer in authentic ancient Greek, ancient Roman, ancient Byzantine, world coins & more. Ilya Zlobin is an independent individual who has a passion for coin collecting, research and understanding the importance of the historical context and significance all coins and objects represent. Send me a message about this and I can update your invoice should you want this method. Getting your order to you, quickly and securely is a top priority and is taken seriously here. Great care is taken in packaging and mailing every item securely and quickly. What is a certificate of authenticity and what guarantees do you give that the item is authentic? You will be very happy with what you get with the COA; a professional presentation of the coin, with all of the relevant information and a picture of the coin you saw in the listing.

Additionally, the coin is inside it's own protective coin flip (holder), with a 2x2 inch description of the coin matching the individual number on the COA. Whether your goal is to collect or give the item as a gift, coins presented like this could be more prized and valued higher than items that were not given such care and attention to.

When should I leave feedback? Please don't leave any negative feedbacks, as it happens sometimes that people rush to leave feedback before letting sufficient time for their order to arrive. The matter of fact is that any issues can be resolved, as reputation is most important to me.

My goal is to provide superior products and quality of service. How and where do I learn more about collecting ancient coins? Visit the "Guide on How to Use My Store". For on an overview about using my store, with additional information and links to all other parts of my store which may include educational information on topics you are looking for.

This item is in the category "Coins & Paper Money\Coins: Ancient\Greek (450 BC-100 AD)". The seller is "highrating_lowprice" and is located in this country: US.