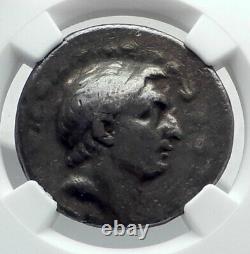 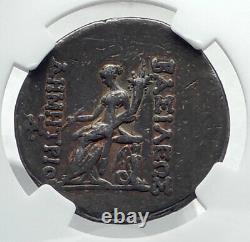 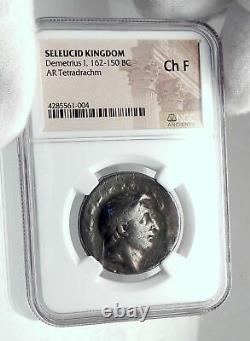 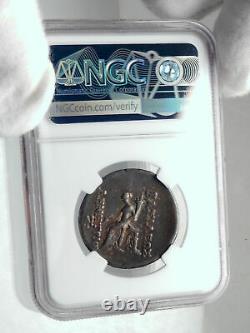 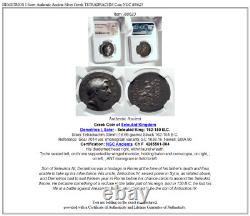 Son of Seleukos IV, Demetrios was a hostage in Rome at the time of his father's death and thus unable to take up his inheritance. His uncle, Antiochos IV, seized power in Syria, as related above, and Demetrios had to wait thirteen year in Rome before his chance came to ascend the Seleukid throne.

He became something of a recluse in the latter part of his reign, and in 150 B. He lost his life in a battle against Alexander Balas, who claimed to be the son of Antiochos IV. Tyche (meaning "luck"; Roman equivalent: Fortuna) was the presiding tutelary deity that governed the fortune and prosperity of a city, its destiny. She is the daughter of Aphrodite and Zeus or Hermes. In literature, she might be given various genealogies, as a daughter of Hermes and Aphrodite, or considered as one of the Oceanids, daughters of Oceanus and Tethys, or of Zeus.

She was connected with Nemesis and Agathos Daimon ("good spirit"). The Greek historian Polybius believed that when no cause can be discovered to events such as floods, droughts, frosts or even in politics, then the cause of these events may be fairly attributed to Tyche. Increasingly during the Hellenistic period, cities venerated their own specific iconic version of Tyche, wearing a mural crown (a crown like the walls of the city). Tyche had temples at Caesarea Maritima, Antioch, Alexandria and Constantinople.

In Alexandria the Tychaeon, the temple of Tyche, was described by Libanius as one of the most magnificent of the entire Hellenistic world. She was uniquely venerated at Itanos in Crete, as Tyche Protogeneia, linked with the Athenian Protogeneia ("firstborn"), daughter of Erechtheus, whose self-sacrifice saved the city. Stylianos Spyridakis concisely expressed Tyche's appeal in a Hellenistic world of arbitrary violence and unmeaning reverses: In the turbulent years of the Epigoni of Alexander, an awareness of the instability of human affairs led people to believe that Tyche, the blind mistress of Fortune, governed mankind with an inconstancy which explained the vicissitudes of the time. Tyche appears on many coins of the Hellenistic period in the three centuries before the Christian era, especially from cities in the Aegean. Unpredictable turns of fortune drive the complicated plotlines of Hellenistic romances, such as Leucippe and Clitophon or Daphnis and Chloe.

She experienced a resurgence in another era of uneasy change, the final days of publicly sanctioned Paganism, between the late-fourth-century emperors Julian and Theodosius I who definitively closed the temples. The effectiveness of her capricious power even achieved respectability in philosophical circles during that generation, though among poets it was a commonplace to revile her for a fickle harlot. The constellation of Virgo is sometimes identified as the heavenly figure of Tyche, as well as other goddesses such as Demeter and Astraea. 187 BC - 150 BC, surnamed Soter Greek: S? - "Savior", was a ruler of the Hellenistic Seleucid Empire.

He had been sent to Rome as a hostage during the reign of his father, Seleucus IV Philopator. After his father's death in 175 BC, Antiochus IV Epiphanes took advantage of Demetrius' captivity to seize the throne. Demetrius escaped from confinement and established himself on the Syrian throne (162 BC) after overthrowing and murdering King Antiochus V Eupator, his cousin. Demetrius acquired his surname of Soter, or Saviour, from the Babylonians, whom he delivered from the tyranny of the Median satrap, Timarchus. Timarchus, who had distinguished himself by defending Media against the emergent Parthians, seems to have treated Demetrius' accession as an excuse to declare himself an independent king and extend his realm into Babylonia.

His forces were however not enough for the legal Seleucid king: Demetrius defeated and killed Timarchus in 160 BCE, and dethroned Ariarathes, king of Cappadocia. The Seleucid empire was temporarily united again. Demetrius is famous in Jewish history for his victory over the Maccabees. Demetrius' downfall is attributed to Heracleides, a surviving brother of the defeated rebel Timarchus, who championed the cause of Alexander Balas, a boy he claimed was a natural son of Antiochus IV Epiphanes. Heracleides convinced the Roman Senate to support the young pretender against Demetrius, who was defeated and killed in 150 BC. The Seleucid Empire was a Hellenistic state ruled by the Seleucid dynasty founded by Seleucus I Nicator following the division of the empire created by Alexander the Great. Seleucus received Babylonia and, from there, expanded his dominions to include much of Alexander's near eastern territories. The Greek population of the cities who formed the dominant elite were reinforced by emigration from Greece. Seleucid expansion into Anatolia and Greece was abruptly halted after decisive defeats at the hands of the Roman army. Their attempts to defeat their old enemy Ptolemaic Egypt were frustrated by Roman demands. Much of the eastern part of the empire was conquered by the Parthians under Mithridates I of Parthia in the mid-2nd century BC, yet the Seleucid kings continued to rule a rump state from the Seleukid Kingdom until the invasion by Armenian king Tigranes the Great and their ultimate overthrow by the Roman general Pompey. World-renowned expert numismatist, enthusiast, author and dealer in authentic ancient Greek, ancient Roman, ancient Byzantine, world coins & more. Ilya Zlobin is an independent individual who has a passion for coin collecting, research and understanding the importance of the historical context and significance all coins and objects represent.

Visit the Guide on How to Use My Store. For on an overview about using my store, with additional information and links to all other parts of my store which may include educational information on topics you are looking for. This item is in the category "Coins & Paper Money\Coins: Ancient\Greek (450 BC-100 AD)". The seller is "highrating_lowprice" and is located in this country: US.