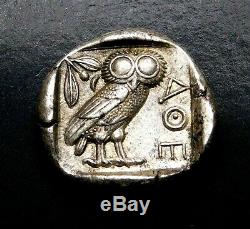 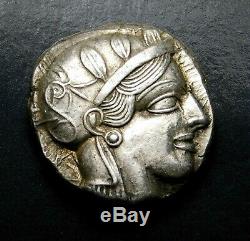 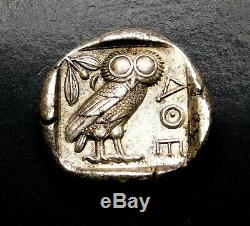 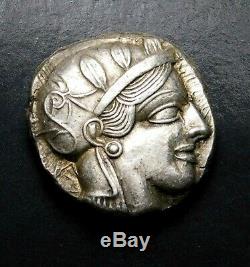 (17.22g, 24mm, 10h) Circa 454-404 BC. Obv: Head of Athena right, wearing crested Attic helmet ornamented with three olive leaves above visor and spiral palmette on bowl, round earring with central boss, and pearl necklace. / Rev: Owl standing to right with head facing, olive sprig and crescent behind, before; all within incuse square. Kroll 8; Dewing 1591-8; SNG Copenhagen 31.

This coin is guaranteed for life to be a genuine ancient coin. Here at Ancient Auctions we have pledged to uphold the highest ethical standards. History of the Athenian Tetradrachm.

The transition from didrachms to tetradrachms occurred during c. 525 - 510 BC; the abandonment of the "heraldic"-type didrachms and the Archaic tetradrachms (early "owls") of the polis of Athens apparently took place shortly after the Battle of Salamis, 480 BC.

This transition is supported by the discovery of contemporary coin hoards, and more particularly of a coin hoard found on the Acropolis in 1886. Athens had silver mines in state ownership, which provided the bullion. Most well known were the silver mines of Laurium at a close distance from Athens.

The Athenian tetradrachm was stamped with the head of Athena on the obverse, and on the reverse the image of the owl of Athena, the iconographic symbol of the Athenian polis, with a sprig of olive and a crescent for the moon. According to Philochorus, it was known as glaux (little owl) throughout the ancient world and "owl" in present-day English language numismatics. The design was kept essentially unchanged for over two centuries, by which time it had become stylistically archaic. To differentiate their currency from the rival coinage of Aegina using the Aeginetic stater of about 12.3 grams, Athens minted its tetradrachm based on the "Attic" standard of 4.3 grams per drachma. The vast number of "owls-tetradrachms" available those days mainly from the silver mines of Laurium financed the several achievements of Athens, such as the reconstruction of the Acropolis and building the Parthenon, as well as many wars, including the Peloponnesian War.

International Buyers - Please Note. Superb Tetradrachm circa 454-404 BC. Ancient Greek Silver Coin" is in sale since Saturday, July 25, 2020. This item is in the category "Coins & Paper Money\Coins\ Ancient\Greek (450 BC-100 AD)". The seller is "ancientauctions" and is located in Fort Lauderdale, Florida. This item can be shipped worldwide.