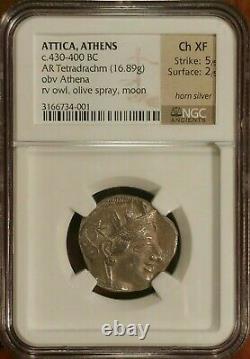 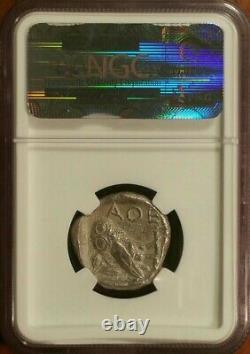 Attica Athens Owl 430-400 BC AR Silver Tetradrachm NGC Choice XF. This listing is for a 430-400 BC Attica, Athens Ancient Greek Silver Tetradrachm that has been certified Choice XF with the scores of 5/5 Strike and 2/5 Surface by NGC. The obverse depicts the head of Athena right, wearing crested Attic helmet ornamented with three laurel leaves and vine scroll. The reverse depicts an owl standing right, head facing, olive sprig and crescent moon behind, all within incuse square. A brilliant example that's well centered with bold details through out. The Owl had gained the trust of the laborers, soldiers, and merchants for their silver purity and popularity. They are still widely known by that term today, the owl depicted upon the Athenian Tetradrachm is the "Minerva Owl". The owl, as a symbol for wisdom, was the mascot of Athena, and frequently accompanies the goddess as this coin demonstrates.

According to myth, Athena, goddess of wisdom and the patron goddess of Athens, even had the ability to take the form of an owl. The reverse depicts a standing owl within an incuse square, head facing forward, with a crescent moon and olive spray, and? Athena is featured on the obverse wearing a helmet with floral scroll and three olive leaves. These well preserved ancient silver Tetradrachm are approximately the size of quarter but twice its thickness. This Ancient coin is #10 in the Top 100 Greatest Ancient Coins book.

Athens was a great military power in ancient Greece and is considered the birthplace of Western civilization and democracy. After defeating the Persians at the Battle of Marathon in 490 BC, Athens was brought into a golden age. During this period of prosperity, Athens expanded its political and economic influence throughout the Greek world, allowing artistic and intellectual progress to flourish at a rate which has never been matched. Their military and naval strength was aided significantly by their influx of funds from the mining of silver at Laurion. The quantity of silver controlled by the Athenians allowed them to mint the authoritative coinage of ancient Greece, the thick and heavy Athenian "owl" tetradrachm, which remains the most recognizable ancient coin today.

This coin was the largest silver coin of its time. President Theodore Roosevelt kept an owl tetradrachm in his pocket and was inspired to order the redesign of the U. Coinage in the 20th century. Thanks for looking, and be sure to check out my other listings for more great items!