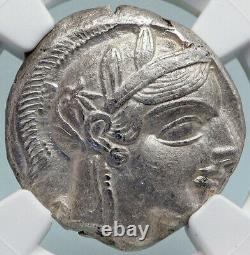 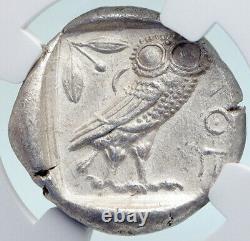 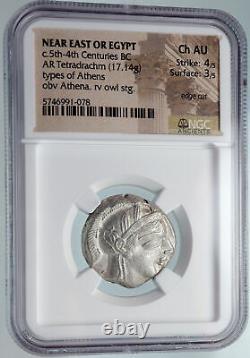 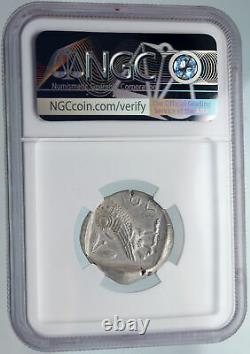 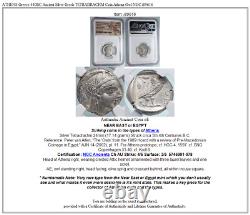 Item: i89616 Authentic Ancient Coin of. NEAR EAST or EGYPT Striking coins in the types of Athens. Silver Tetradrachm 24mm (17.14 grams) Struck circa 5th-4th Centuries B.

Reference: Peter van Alfen, "The'Owls' from the 1989 Hoard with a review of Pre-Macedonian Coinage in Egypt, " AJN 14 (2002), pl. Ch AU Strike: 4/5 Surface: 3/5 5746991-078 Head of Athena right, wearing crested Attic helmet ornamented with three laurel leaves and vine scroll. ATE, owl standing right, head facing; olive sprig and crescent behind, all within incuse square. Numismatic Note: Very rare type from the Near East or Egypt mint which you don't usually see and what makes it even more desirable is it's mint state. This makes a key piece for the collector of Athenian owls and the types. Athens is one of the oldest named cities in the world, having been continuously inhabited for at least 5000 years. Situated in southern Europe, Athens became the leading city of Ancient Greece in the first millennium BC, and its cultural achievements during the 5th century BC laid the foundations of western civilization. The city of Athens during the classical period of Ancient Greece (508-322 BC) was the major urban center of the notable polis (city-state) of the same name, located in Attica, Greece, leading the Delian League in the Peloponnesian War against Sparta and the Peloponnesian League. Athenian democracy was established in 508 BC under Cleisthenes following the tyranny of Isagoras. This system remained remarkably stable, and with a few brief interruptions remained in place for 180 years, until 322 BC (aftermath of Lamian War). The peak of Athenian hegemony was achieved in the 440s to 430s BC, known as the Age of Pericles.

In the classical period, Athens was a center for the arts, learning and philosophy, home of Plato's Akademia and Aristotle's Lyceum, Athens was also the birthplace of Socrates, Pericles, Sophocles, and many other prominent philosophers, writers and politicians of the ancient world. It is widely referred to as the cradle of Western Civilization, and the birthplace of democracy, largely due to the impact of its cultural and political achievements during the 5th and 4th centuries BC on the rest of the then-known European continent. The name of Athens, connected to the name of its patron goddess Athena, originates from an earlier Pre-Greek language.

The etiological myth explaining how Athens acquired this name through the legendary contest between Poseidon and Athena was described by Herodotus, Apollodorus, Ovid, Plutarch, Pausanias and others. It even became the theme of the sculpture on the West pediment of the Parthenon.

Both Athena and Poseidon requested to be patrons of the city and to give their name to it, so they competed with one another for the honour, offering the city one gift each. Poseidon produced a spring by striking the ground with his trident, symbolizing naval power. Athena created the olive tree, symbolizing peace and prosperity. The Athenians, under their ruler Cecrops, accepted the olive tree and named the city after Athena.

Later the Southern Italian city of Paestum was founded under the name of Poseidonia at about 600 BC. A sacred olive tree said to be the one created by the goddess was still kept on the Acropolis at the time of Pausanias (2nd century AD). It was located by the temple of Pandrosus, next to the Parthenon. According to Herodotus, the tree had been burnt down during the Persian Wars, but a shoot sprung from the stump. The Greeks saw this as a symbol that Athena still had her mark there on the city. Plato, in his dialogue Cratylus, offers his own etymology of Athena's name connecting it to the phrase? A or he theoû nóesis? Early Athenian military history and Persian era. Prior to the rise of Athens, Sparta considered itself to be the leader of the Greeks, or hegemon.

In 499 BC, Athens sent troops to aid the Ionian Greeks of Asia Minor, who were rebelling against the Persian Empire (the Ionian Revolt). This provoked two Persian invasions of Greece (see Persian Wars). In 490 BC, the Athenians, led by the soldier-statesman Miltiades, defeated the first invasion of the Persians under Darius I at the Battle of Marathon. When a small Greek force holding the pass of Thermopylae was defeated, the Athenians evacuated Athens, the city that was taken by the Persians.

Athens got captured and sacked twice by the Persians within one year after Thermopylae. Subsequently, the Athenians (led by Themistocles), with their allies, engaged the much larger Persian navy at sea in the Battle of Salamis. Xerxes built a throne on the coast in order to watch the Greek navy being defeated, but instead, the Persians were routed. This established a great turning point in the war.

In 479 BC, the Athenians and Spartans, with their allies, defeated the Persian army at the Battle of Plataea. However, it was Athens that took the war to Asia Minor. These victories enabled it to bring most of the Aegean and many other parts of Greece together in the Delian League, an Athenian-dominated alliance.

The period from the end of the Persian Wars to the Macedonian conquest marked the zenith of Athens as a center of literature, philosophy (Greek philosophy), and the arts (Greek theatre). In Athens at this time, the political satire of the Comic poets at the theatres had a remarkable influence on public opinion. Some of the most important figures of Western cultural and intellectual history lived in Athens during this period: the dramatists Aeschylus, Aristophanes, Euripides and Sophocles, the physician Hippocrates, the philosophers Aristotle, Plato and Socrates, the historians Herodotus, Thucydides and Xenophon, the poet Simonides, and the sculptor Phidias.

The leading statesman of this period was Pericles, who used the tribute paid by the members of the Delian League to build the Parthenon and other great monuments of classical Athens. The city became, in Pericles's words, the school of Hellas [Greece]. The resentment felt by other cities at the hegemony of Athens led to the Peloponnesian War, which began in 431 BC and pitted Athens and its increasingly rebellious overseas empire against a coalition of land-based states led by Sparta. The conflict ended with a victory for Sparta and the end of Athenian command of the sea. This civil war in Greece left the Greeks weak and divided leading to Philip II and Alexander the Great taking over Greece. Athenian coup of 411 BC. The war ended in 404 BC with the complete defeat of Athens. Since the loss of the war was largely blamed on democratic politicians such as Cleon and Cleophon, there was a brief reaction against democracy, aided by the Spartan army (the rule of the Thirty Tyrants). In 403 BC, however, democracy was restored by Thrasybulus and an amnesty was declared. Corinthian War and the Second Athenian League. Sparta's former allies soon turned against her, due to her imperialist policy, and soon Athens' former enemies Thebes and Corinth had become her allies; they fought with Athens and Argos against Sparta in the indecisive Corinthian War (395 - 387 BC).

Opposition to Sparta enabled Athens to establish a Second Athenian League. Finally Thebes defeated Sparta in 371 BC in the Battle of Leuctra. But then the Greek cities (including Athens and Sparta) turned against Thebes, whose dominance was stopped at the Battle of Mantinea (362 BC) with the death of its military-genius leader Epaminondas. By the mid-4th century BC, however, the northern Greek kingdom of Macedon was becoming dominant in Athenian affairs, despite the warnings of the last great statesman of independent Athens, Demosthenes. In 338 BC the armies of Philip II defeated an alliance of some of the Greek city-states including Athens and Thebes at the Battle of Chaeronea, effectively ending Athenian independence.

Subsequently, the conquests of his son Alexander the Great widened Greek horizons and made the traditional Greek city state obsolete. Athens remained a wealthy city with a brilliant cultural life, but ceased to be a leading power.

In 88-85 BC, most Athenian buildings, both houses and fortifications, were leveled by the Roman general Sulla (138 BC - 78 BC), although many civic buildings and monuments were left intact. Under Rome, Athens was given the status of a free city because of its widely admired schools. The Roman emperor Hadrian, in the 2nd century AD, constructed a library, a gymnasium, an aqueduct which is still in use, several temples and sanctuaries, a bridge and financed the completion of the Temple of Olympian Zeus. The city was sacked by the Heruli in AD 267, resulting in the burning of all the public buildings, the plundering of the lower city and the damaging of the Agora and Acropolis.

After this the city to the north of the Acropolis was hastily refortified on a smaller scale, with the Agora left outside the walls. Athens remained a centre of learning and philosophy during its 500 years of Roman rule, patronized by emperors such as Nero and Hadrian. The sack of the city by the Heruls in 267 and Alaric in 396, however, dealt a heavy blow to the city's fabric and fortunes, and Athens was henceforth confined to a small fortified area that embraced a fraction of the ancient city. The city remained an important center of learning, especially of Neoplatonism-with notable pupils including Gregory of Nazianzus, Basil of Caesarea and emperor Julian-and consequently a center of paganism. Christian items do not appear in the archaeological record until the early 5th century. The Emperor Justinian I closed down the city's philosophical schools in 529, an event whose impact on the city is much debated, but is generally taken to mark the end of the ancient history of Athens. World-renowned expert numismatist, enthusiast, author and dealer in authentic ancient Greek, ancient Roman, ancient Byzantine, world coins & more. Ilya Zlobin is an independent individual who has a passion for coin collecting, research and understanding the importance of the historical context and significance all coins and objects represent. Send me a message about this and I can update your invoice should you want this method. Getting your order to you, quickly and securely is a top priority and is taken seriously here.

How and where do I learn more about collecting ancient coins? Visit the "Guide on How to Use My Store". For on an overview about using my store, with additional information and links to all other parts of my store which may include educational information on topics you are looking for. This item is in the category "Coins & Paper Money\Coins: Ancient\Greek (450 BC-100 AD)". The seller is "highrating_lowprice" and is located in this country: US. This item can be shipped worldwide.