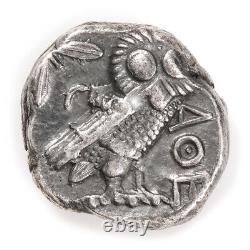 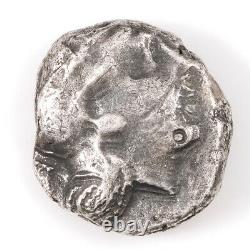 About 300BC of later style. Fine/VF+, the thick flan's face area is too small for the dies.

Helmeted head of Athena, facing right, bankers punch mark to chin. Owl standing right, head turned to front, AOE before, olive twig and crescent in left field. Athena was the goddess of both wisdom and warfare, and the patron goddess of Athens. The owl was Athena's mascot, so rightly appears on the reverse of these immensely popular coins, both now and then; in fact, they were so popular the mint couldn't keep up with demand and standards fell, hence the off-centred images and thick flans. The owl is considered to be a Little Owl and the olive sprig alludes to the export of oil, that, along with silver and pottery, accounted for the areas prosperity. It is very rarely found during archaeological digs of domestic areas. This varies with the age of coin and there are grades in-between. As struck with no traces of wear. Very slight traces of wear, all parts of legend etc present, visible and clear.

My career took a leap forward when I joined Bonhams in 1976. Some five years later I became head of the Decorative Arts department. The item "Ancient Greek, Attica Silver Tetradrachm, Athens, c300BC" is in sale since Friday, October 23, 2020. This item is in the category "Coins\Coins\Ancient\Greek". The seller is "eric-knowles-the-hoard" and is located in High Wycombe.