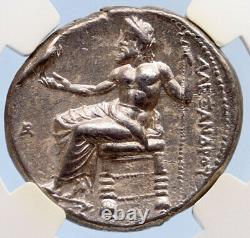 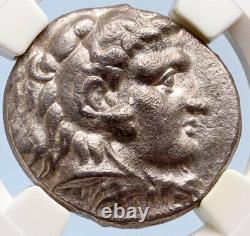 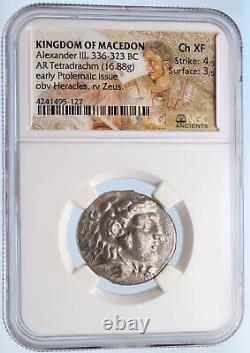 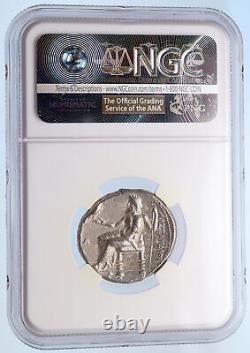 And scepter; AP monogram in field to left. Best known as Alexander the Great, he was a king (basileus in Greek) of the Ancient Greek kingdom of Macedonia. He was born in the city of Pella in 356 BC. By age 20, Alexander succeeded his father Philip II to the throne as king. He spent most of his years as king in an unprecedented military campaign of conquest through Asia, northeast Africa and even reached India. By age 30 he created one of the biggest empires in the ancient world, reaching from Greece to northwestern India. Being undefeated in battle, many consider him as one of history's most successful military commanders. He could be considered one of history's most important figures, having spread the Greek civilization far and wide, and was even admired by Julius Caesar along with many other important historical personages as well. Heracles, born Alcaeus (Alkaios) or Alcides, was a divine hero in Greek mythology, the son of Zeus and Alcmene, foster son of Amphitryon and great-grandson and half-brother (as they are both sired by the god Zeus) of Perseus. He was the greatest of the Greek heroes, a paragon of masculinity, the ancestor of royal clans who claimed to be Heracleidae and a champion of the Olympian order against chthonic monsters. In Rome and the modern West, he is known as Hercules, with whom the later Roman emperors, in particular Commodus and Maximian, often identified themselves.

The Romans adopted the Greek version of his life and works essentially unchanged, but added anecdotal detail of their own, some of it linking the hero with the geography of the Central Mediterranean. Details of his cult were adapted to Rome as well. Extraordinary strength, courage, ingenuity, and sexual prowess with both males and females were among the characteristics commonly attributed to him. Heracles used his wits on several occasions when his strength did not suffice, such as when laboring for the king Augeas of Elis, wrestling the giant Antaeus, or tricking Atlas into taking the sky back onto his shoulders.

Together with Hermes he was the patron and protector of gymnasia and palaestrae. His iconographic attributes are the lion skin and the club. These qualities did not prevent him from being regarded as a playful figure who used games to relax from his labors and played a great deal with children. By conquering dangerous archaic forces he is said to have "made the world safe for mankind" and to be its benefactor.

Heracles was an extremely passionate and emotional individual, capable of doing both great deeds for his friends (such as wrestling with Thanatos on behalf of Prince Admetus, who had regaled Heracles with his hospitality, or restoring his friend Tyndareus to the throne of Sparta after he was overthrown) and being a terrible enemy who would wreak horrible vengeance on those who crossed him, as Augeas, Neleus and Laomedon all found out to their cost. In the ancient Greek religion, Zeus was the "Father of Gods and men".

Who ruled the Olympians of Mount Olympus as a father ruled the family. He was the god of sky and thunder in Greek mythology.

In most traditions he was married to Hera, although, at the oracle of Dodona, his consort was Dione: according to the Iliad, he is the father of Aphrodite by Dione. He is known for his erotic escapades. These resulted in many godly and heroic offspring, including Athena, Apollo and Artemis, Hermes, Persephone (by Demeter), Dionysus, Perseus, Heracles, Helen of Troy, Minos, and the Muses (by Mnemosyne); by Hera, he is usually said to have fathered Ares, Hebe and Hephaestus. As Walter Burkert points out in his book, Greek Religion, Even the gods who are not his natural children address him as Father, and all the gods rise in his presence. For the Greeks, he was the King of the Gods, who oversaw the universe. As Pausanias observed, "That Zeus is king in heaven is a saying common to all men". In Hesiod's Theogony Zeus assigns the various gods their roles. In the Homeric Hymns he is referred to as the chieftain of the gods.

His symbols are the thunderbolt, eagle, bull, and oak. In addition to his Indo-European inheritance, the classical "cloud-gatherer" also derives certain iconographic traits from the cultures of the Ancient Near East, such as the scepter. Zeus is frequently depicted by Greek artists in one of two poses: standing, striding forward, with a thunderbolt leveled in his raised right hand, or seated in majesty. Alexander III of Macedon (20/21 July 356 BC - 10/11 June 323 BC), commonly known as Alexander the Great, was a king (basileus) of the Ancient Greek kingdom of Macedon and a member of the Argead dynasty.

Born in Pella in 356 BC, Alexander succeeded his father, Philip II, to the throne at the age of twenty. He spent most of his ruling years on an unprecedented military campaign through Asia and northeast Africa, and by the age of thirty he had created one of the largest empires of the ancient world, stretching from Greece to northwestern India. He was undefeated in battle and is widely considered one of history's most successful military commanders.

During his youth, Alexander was tutored by the philosopher Aristotle until the age of 16. After Philip's assassination in 336 BC, Alexander succeeded his father to the throne and inherited a strong kingdom and an experienced army. Alexander was awarded the generalship of Greece and used this authority to launch his father's Panhellenic project to lead the Greeks in the conquest of Persia. In 334 BC, he invaded the Achaemenid Empire, and began a series of campaigns that lasted ten years. Following the conquest of Asia Minor, Alexander broke the power of Persia in a series of decisive battles, most notably the battles of Issus and Gaugamela.

In the years following his death, a series of civil wars tore his empire apart, resulting in several states ruled by the Diadochi, Alexander's surviving generals and heirs. Alexander's legacy includes the cultural diffusion his conquests engendered, such as Greco-Buddhism. He founded some twenty cities that bore his name, most notably Alexandria in Egypt. Alexander's settlement of Greek colonists and the resulting spread of Greek culture in the east resulted in a new Hellenistic civilization, aspects of which were still evident in the traditions of the Byzantine Empire in the mid-15th century and the presence of Greek speakers in central and far eastern Anatolia until the 1920s. Alexander became legendary as a classical hero in the mold of Achilles, and he features prominently in the history and mythic traditions of both Greek and non-Greek cultures.

He became the measure against which military leaders compared themselves, and military academies throughout the world still teach his tactics. He is often ranked among the most influential people in human history, along with his teacher Aristotle.

Visit the "Guide on How to Use My Store". For on an overview about using my store, with additional information and links to all other parts of my store which may include educational information on topics you are looking for. This item is in the category "Coins & Paper Money\Coins: Ancient\Greek (450 BC-100 AD)". The seller is "highrating_lowprice" and is located in this country: US.