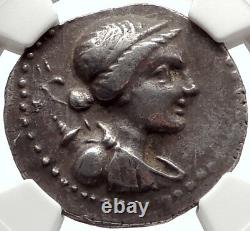 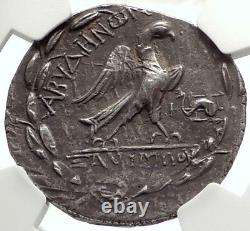 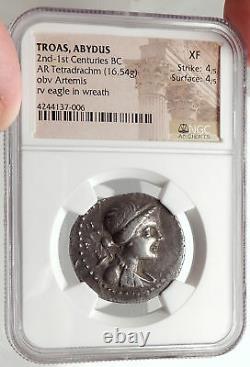 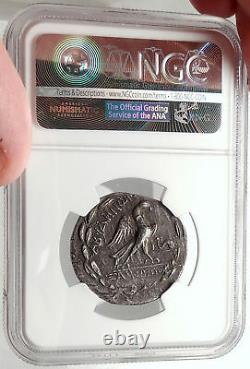 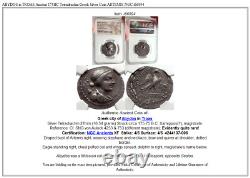 XF Strike: 4/5 Surface: 4/5 4244137-006 Draped bust of Artemis right, wearing stephane and necklace, bow and quiver at shoulder, dotted border. Eagle standing right, chest puffed out and wings spread, dolphin to right, magistrate's name below. Abydos was a Milesian colony on the shores of the Hellespont, opposite Sestos. Artemis was one of the most widely venerated of the Ancient Greek deities. Some scholars believe that the name, and indeed the goddess herself, was originally pre-Greek. Homer refers to her as Artemis Agrotera, Potnia Theron "Artemis of the wildland, Mistress of Animals". In the classical period of Greek mythology, Artemis Greek: (nominative)?? was often described as the daughter of Zeus and Leto, and the twin sister of Apollo. She was the Hellenic goddess of the hunt, wild animals, wilderness, childbirth, virginity and young girls, bringing and relieving disease in women; she often was depicted as a huntress carrying a bow and arrows. The deer and the cypress were sacred to her.

In later Hellenistic times, she even assumed the ancient role of Eileithyia in aiding childbirth. Artemis later became identified with Selene, a Titaness who was a Greek moon goddess, sometimes depicted with a crescent moon above her head. She was also identified with the Roman goddess Diana, with the Etruscan goddess Artume, and with the Greek or Carian goddess Hecate. Abydos, an ancient city of Mysia, in Asia Minor, situated at Nara Burnu or Nagara Point on the best harbor on the Asiatic shore of the Hellespont. Across Abydos lies Sestus on the European side marking the shortest point in the Dardanelles, scarcely a mile broad.

The strategic site has been a prohibited zone in the twentieth century. Hero and Leander's story was been near Abydos. Abydos was first mentioned in the catalogue of Trojan allies Iliad ii.

It probably was a Thracian town, as Strabo has it, but was afterwards colonized by Milesians, with the consent of Gyges, king of Lydia, around 700 BC. It was occupied by the Persians in 514 BC, and Darius burnt it in 512.

Here Xerxes built two bridges of boats and crossed the strait in 480 BC when he invaded Greece. Abydos thereafter became a member of the Delian League, until it revolted from Athenian rule in 411 BC.

It allied itself to History of Sparta, until 394 BC; King Agesilaus of Sparta crossed here while returning to Greece. Abydos then passed under Achaemenid rule, until 334 BC. Alexander the Great threw a spear to Abydos while crossing the strait and claimed Asia as his own. Abydos is celebrated for the vigorous resistance it made against Philip V of Macedon in 200 BC, and is famed in myth as the home of Leander. It minted coins from the early fifth century BC to the mid-third century AD.

The Troad or Troas is the historical name of the Biga peninsula modern Turkish: Biga Yarimadasi, Greek:????? In the northwestern part of Anatolia, Turkey.

This region now is part of the Çanakkale province of Turkey. Bounded by the Dardanelles to the northwest, by the Aegean Sea to the west and separated from the rest of Anatolia by the massif that forms Mount Ida, the Troad is drained by two main rivers, the Scamander (Karamenderes) and the Simois, which join at the area containing the ruins of Troy. Grenikos, Kebren, Simoeis, Rhesos, Rhodios, Heptaporos and Aisepos were seven rivers of the Troad and the names of the river gods that inhabited each river.

Part of the walls of Troy. The Troad gets its name from the Hittites' name for the region, Taruisa. This identification was first put forth by Emil Forrer, but largely disputed by most Hittite experts until 1983 when Houwink ten Cate showed that two fragments were from the same original cuneiform tablet and in his discussion of the restored letter showed that Taruisa and Wilusa (Troy) were correctly placed in northwestern Anatolia. According to Trevor Bryce, Hittite texts indicate a number of Ahhiyawan raids on Wilusa during the 13th century BC, which may have resulted with the overthrow of king Walmu. Bryce also reports that archeological surveys conducted by John Bintliff in the 1970s show that a powerful kingdom that held sway over northwestern Anatolia was based at Wilusa (Troy).

Following its conquest by the Ottoman Empire, the Troad formed part of the sanjak of Biga. He also refers to Troas when he asks his fellow worker Timothy out of Ephesus, to get his coat there.

This was a journey of about 500 kilometres (310 mi). Paul was accompanied by Luke.

World-renowned expert numismatist, enthusiast, author and dealer in authentic ancient Greek, ancient Roman, ancient Byzantine, world coins & more. Ilya Zlobin is an independent individual who has a passion for coin collecting, research and understanding the importance of the historical context and significance all coins and objects represent. Send me a message about this and I can update your invoice should you want this method. Getting your order to you, quickly and securely is a top priority and is taken seriously here. Great care is taken in packaging and mailing every item securely and quickly.

Whether your goal is to collect or give the item as a gift, coins presented like this could be more prized and valued higher than items that were not given such care and attention to. When should I leave feedback? Please don't leave any negative feedbacks, as it happens sometimes that people rush to leave feedback before letting sufficient time for their order to arrive.

For on an overview about using my store, with additional information and links to all other parts of my store which may include educational information on topics you are looking for. This item is in the category "Coins & Paper Money\Coins: Ancient\Greek (450 BC-100 AD)".