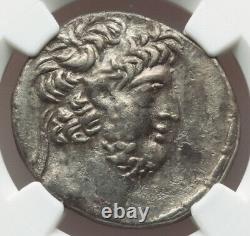 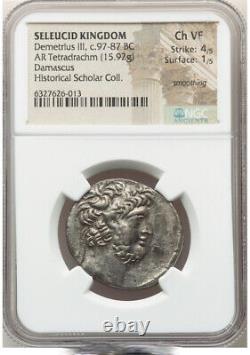 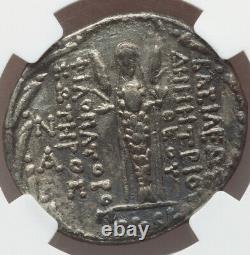 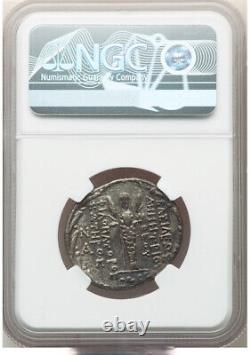 The Seleucid Empire - Demetrius III. Demetrius III Theos Philopator Soter Philometor Euergetes Callinicus Ancient Greek:?? Surnamed Eucaerus; between 124 and 109 BC - after 87 BC was a Hellenistic Seleucid monarch who reigned as the King of Syria between 96 and 87 BC. He was a son of Antiochus VIII and, most likely, his Egyptian wife Tryphaena.

Demetrius III's early life was spent in a period of civil war between his father and his uncle Antiochus IX, which ended with the assassination of Antiochus VIII in 96 BC. After the death of their father, Demetrius III took control of Damascus while his brother Seleucus VI prepared for war against Antiochus IX, who occupied the Syrian capital Antioch.

By 87 BC, Demetrius III had most of Syria under his authority. He attempted to appease the public by promoting the importance of the local Semitic gods, and he may have given Damascus the dynastic name Demetrias. By late 87 BC, Demetrius III attacked Philip I in the city of Beroea, where Philip I's allies called on the Parthians for help.

The allied forces routed Demetrius III and besieged him in his camp; he was forced to surrender and spent the rest of his life in exile in Parthia. Philip I took Antioch, while Antiochus XII, another brother of Demetrius III, took Damascus.

This item is in the category "Coins & Paper Money\Coins: Ancient\Greek (450 BC-100 AD)". The seller is "redoubt_numismatics" and is located in this country: US. This item can be shipped worldwide.