132 BC Tetradrachm Ar. Lydia. For Those Who like Snakes LCGS 25 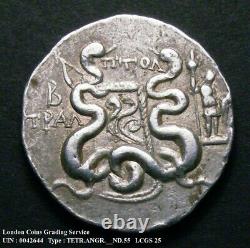 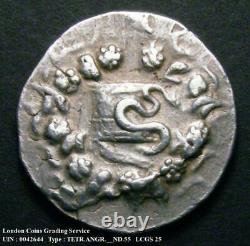 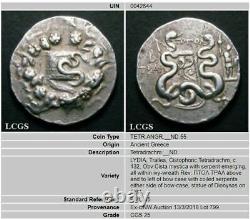 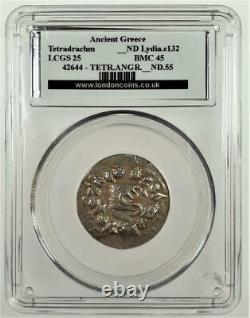 For Those Who like Snakes. Cista (or cista mystica), a basket used for housing sacred snakes in connection with the initiation ceremony into the cult of Bacchus (Dionysus). In the Dionysian mysteries a serpent, representing the god, was carried in a box called a cista on a bed of vine leaves. The cista mentioned in the mysteries of Isis may also have held a serpent, the missing phallus of Osiris.

The fertility festival of the women of Arretophoria included cereal paste images'of serpents and forms of men,' in other words, phallic symbols. Lydians in the western part of Asia Minor were the first country to mint coins in the history of mankind.

They made Gold, Silver and Electrum (a mixture of gold and silver) coins at Sardis. 132 BC Lydia, Tralles, Cistophoric Silver Tetradrachm LCGS 25. Weight 12.17g, SNG von Aulock 3263; BMC 45. For those who like snakes. Obverse; Cista Mystica with serpent, all within ivy wreath. Above and to left of bow case with coiled serpents either side of bow-case, statue of Dionysos on right. In a sealed LCGS slab. LCGS rigorously checks the authenticity and they will not encapsulate any coins if they have any doubt as to its authenticity, so buyers of coins encapsulated by LCGS can rest assured that a professional company has authenticated the coin and graded it.